Scanse has never released a product before. There is no contact information available on the company’s website and its Kickstarter campaign won’t begin until February of 2016. The one thing we know about Scanse is that they are working on a LiDAR sensor, the Sweep, and it looks like a true consumer LiDAR.

The website and promotional photos for the Sweep LiDAR sensor ooze a minimalism not common within our space. It’s like something Apple would make, or something you could pick up on Amazon.com. 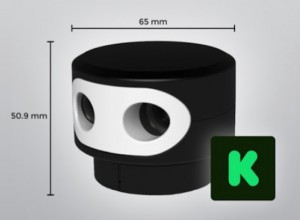 Sweep may not be the most powerful sensor on the market, but for a projected price of $249, it’s no slouch either. Scannable says the sensor weighs 120 grams (about 0.25 pounds), has a range of 40 meters, high ambient light tolerance, “immunity to malicious interference” (hackers?), and gathers 500 points per second with accuracy of 1 centimeter.

No word yet on whether it’s a 2D or 3D sensor, but the smart money says 2D.

It’s not quite professional-grade, but it’s more than good enough for most consumers. To wit, the list of projected use cases for the Sweep includes a number of consumer applications. Scanse says the sensor is ideal for obstacle avoidance, mapping environments, sense and avoid autopilot, smart home security, interactive art, and space dimensions measurement.

The full spec sheet indicates that the Sweep includes “simple serial connectivity for easy integration,” which in practice means it connects using a UART interface. However, Scanse is also going to offer an optional interface adapter for USB 2.0. This means it’s possible you may be able to plug the unit directly into your laptop, just like a true consumer device.

Scanse has not released any more information about the Sweep scanner. SPAR will report on the Kickstarter as soon as the page is available.