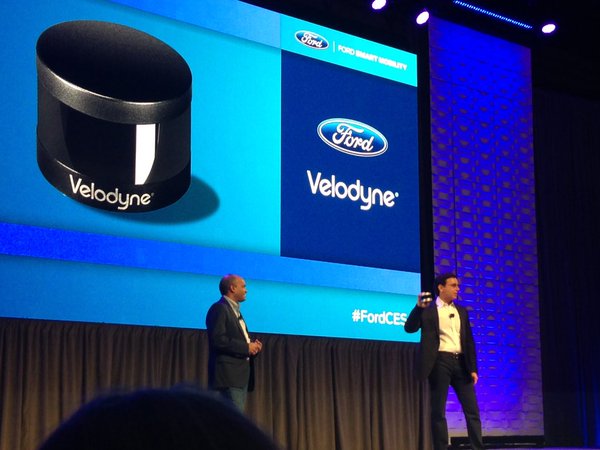 Last year, SPAR spoke to Wolfgang Juchmann, at that time the director of sales and marketing at Velodyne, who explained the reasoning behind a 200m range. “A car’s computer will need to see farther out than current sensors allow in order to be effective at sensing objects and avoiding a collision,” Juchmann said. “If you go on a German highway and you drive 100 mph, you need to look much farther than 100 meters to make a decision and still be able to stop in 3 seconds.”

In Ford’s official statement the company praises the design of the sensor, which is small and light enough to be placed below a car’s side-view mirror. With that optimal placement, Ford is able to reduce the number of LiDAR sensors on their research vehicles from four to two, and greatly reduce the cost of the LiDAR system required for a fully autonomous vehicle.

What The New PUCK Means for You
Though Velodyne has previously indicated that this particular sensor will only be available to auto makers, its release is good news for all of Velodyne’s customers.

For more in-depth information about the benefits of the Solid-State Hybrid Ultra PUCK Auto, see SPAR’s conversation with Juchmann about the sensor last year when it was still in development.