Linda tries out the DAQRI helmet.

Several years ago Raytheon had a big problem with one of their satellites in production, of which only one is manufactured a year. A line worker had inadvertently used the wrong torque wrench, and the resulting trouble only became clear down the line when the insulation was damaged. Production was halted for three months to locate the source, then another month to be certain there weren’t additional problems. After a meeting with Brian Mullins of DAQRI, chief engineer Andy Lowery saw that augmented reality could prevent costly errors like this. And from his experience in the Navy aboard a nuclear aircraft carrier, he also understood the value AR could have for preventative maintenance and safety.

At the DAQRI 4D Expo held in Los Angeles on February 19-20, demonstrations of their newest smart helmet prototype were provided, including one with thermal sensing. I found it didn’t take long to get the hang of using the helmet. For one demonstration the goal was to replace a canister, which first required rotating a series of valves in front of you. First step: rotate left valve counter-clockwise 180 degrees. The valve is shown with a red arrow around it, identifying the valve and direction of turn. When the task is accomplished you step back and focus your eyes on a virtual target to your right. It recognizes your focus and then moves on to the next step, until as final step you are instructed to remove the canister and replace with a new one.

During the Expo, DAQRI described a few new developments. They’ve recently partnered with Qualcomm and have a much smaller circuit board which will make the helmet lighter weight. They’ve also acquired Melon, which provides an EEG-tracking headband for bio-sensing such conditions in the wearer as stress, focus, drowsiness, heart rate.

And, in a seemingly tangential move (yet interesting because it targets young users) they’ve partnered with Crayola on their “Color Alive” coloring books and free downloadable augmented reality app. Each colored character comes to life when tapped on the tablet screen and will flap its wings and breathe fire (dragon) or twirl (ballerina), and can be viewed off the page—even in the doorway or next to you so you can take a photo with your character. The next step, not yet available, will be for the young consumers to 3D-print their characters. 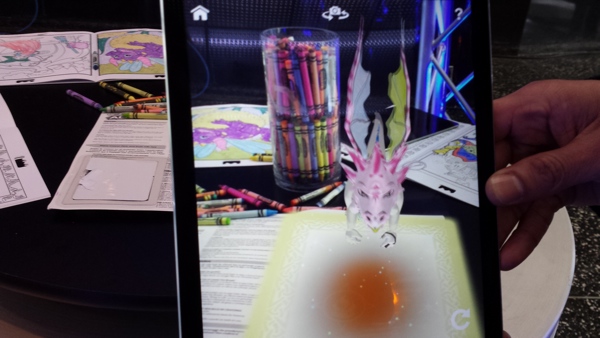 Crayons aside, DAQRI has determined that their main focus is on industrial facilities markets, therefore the helmets are professional-grade and will offer long battery life, which they identify as a workday, allowing that this may require recharging or changing out the battery once. The smart helmets are expected to hit the market this spring.

How DAQRI Took Augmented Reality from Toy to Tool