Pointscene: Dead-Simple Point Clouds Anyone Can Use

Have you ever wanted to share a point cloud with a customer or colleague? Do you know someone who would benefit from the valuable data a point cloud contains, but doesn’t even know what one is? Helsinki-based Pointscene is looking to help you with that.

“The idea,” Pointscene CTO Jonne Davidsson told SPAR on the ILMF floor, “is to make LiDAR datasets available for anyone. We have this environment where you have very easy and simple access to massive point cloud data sets.”

Davidsson believes the platform will appeal to any organization or team that needs point clouds to perform initial planning. The company offers organization packages starting from 25 euro per user per month “with enough storage space (1TB included!) to keep you and your data cozy.”

How does it work?
If you are the LiDAR expert on your project team or in your organization, he explained, you can upload your data to the cloud-based PointScene platform and share it with anyone regardless of their familiarity with point clouds. The platform is designed to be simple enough that every member of your team should know how to use it once they log on.

Pointscene requires no special software, and works within Google Chrome or Mozilla Firefox using webGL technology. “No additional plugins–nothing,” he said. “Just log in and view the data.”

Once inside the environment, users can examine the point cloud data as if they were using a video game engine. As CEO Lauri Hartikainen demonstrated the software, it was very intuitive. Click one point, stretch a line to another point, and the system performs a simple measurement of distance or height to the precision allowed by the point cloud. Click on a point to see its coordinates. Draw a line over a road and then bring up a small window that shows the road in profile.

“They don’t need to leave the office to do some simple measurements, they can just go to the environment and have a look at the data set. It saves quite a lot of time and money.”

Point clouds for the end-user
Pointscene, as Davidsson and Hartinkainen explained it, is designed for with the end user’s ease of use in mind. But it also includes a few features that help you to communicate how the end user should be looking at the data.

Davidsson offered an example of how the software can direct the user’s attention to a specific location within the data. Once you gather the data and put it up on the server, “You can go to a specific spot within the point cloud and share the link with your colleagues, and they will be flown directly to the same spot.”

Another example demonstrated how Pointscene helps to emphasize what the end user should be looking at. For instance, Davidsson explained, “if there’s a mobile mapping project where there has been a lot of classification done already, I can set up point cloud classes and I can change the way how the point clouds are visualized–by intensity, based RBG color, or height.”

He pointed to some telephone poles. “Because of the poles here are classified as a different class, you can emphasize, these are something that you want to look at.”

Pointscene even solves the confusion that novices may have when looking at point clouds by drawing them with adaptive point size. This makes it look like there are surfaces rather than a sea of disconnected points with no clear objects defined. “So we don’t see the actual points that much anymore,” said Davidsson.

Benefits for the LiDAR expert
There is a secondary benefit of this adaptive point drawing, he explained: it saves the keeper of the LiDAR data an entire processing step. “Previously, it’s been necessary to model the environment before you can visualize it in 3D, so now we can skip that step and have the data more rapidly. The environment is based only on point data.”

On top of the features already in place, the Pointscene team plans to add more in the future based on customer feedback. Hartikainen said that “in the pipeline, we are thinking of the possibility of letting users download or extract certain points” by themselves, without the help of the GIS engineer. This saves the engineer another processing step.

There are also plans to add collaboration and project-management features, including annotation functionality, to the software as it matures.

But for now, Pointscene plans to keep the software simple and working properly so that it can work as promotional tool to help spread the word of LiDAR’s value.

“The GIS experts have said it’s really nice to be able to show that they have this kind of data,” Hartikainen said. These experts ask, “Have you ever heard about point clouds? Would you want to use it?” So far, the answer from users has been “Yes, definitely, if it looks like this.” 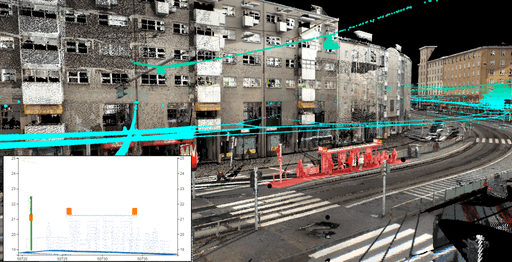