“VR is not about designing buildings or looking at LiDAR data, it’s about seeing the world in the computer the same way you see the world in real life.”

It’s not often that a startup gets their personnel from Google, but not every startup is Wearality. And they’ve even managed to snatch up Google’s former chief technology advocate and co-creator of Google Earth, Michael Jones.

Wearality will sell a smartphone-mounted, easily affordable VR display they call Sky. Imagine Google’s cardboard smart phone holders, but better: Sky uses Lockheed Martin’s state-of-the-art patented double-Fresnel lens technology, which was developed to provide clear focus with little to no color distortion. Because of these lenses, Sky can also offers a 150 degree field of view (FOV), which is significantly more than standard 90-100 degrees. Wearality claims that all this tech allows Sky to reduce and sometimes even eliminate the “simulation sickness” often experienced by users of VR systems. Expected rollout to consumers is late 2015. www.wearality.com Estimates put the price well below $100.

SPAR caught up with Jones and discussed what brought him to Wearality from Google, why the smartphone is the future of virtual reality, and why he wants to make the technology a fact of life for at least one billion people. (and their kids).

SPAR: You’ve had quite the career with Google. What inspired you to take on this new role?

Michael Jones: I’ve already been involved in two projects that touched the lives of a billion people. The first was 15-20 years ago at SGI where I was involved in Open GL for building and inventing graphics devices. Then I had the idea for Google Earth, built a team and company around that and sold it to Google. And that has a billion users.

I’m an advisor on a number of boards of directors to help people to start companies, and one of the things I’ve been helping with for five years is this spin-out from Lockheed Martin Corporation, Wearality. They needed someone to help lead them, and I’m convinced this will be the third thing in my life that touches a billion people worldwide.

SPAR: Why pick Wearality and not a company like, say, Microsoft or Sony?

MJ: My aim is higher than others that build VR devices. Right now, every VR company is thinking, “Wow can we capture this niche for 3D immersive visualization to help 1,000 or 10,000 people.” The big ones — Samsung GearVR, Oculus, upcoming HTC Vibe — may help 10,000 people. Or they might get 100,000 people excited about that. I will accept nothing less than a billion people–how can we make VR real for literally a billion people?

It’s not about designing buildings or looking at LiDAR data. It’s about seeing the world in the computer the same way you see the world in real life. The only way to do that is on mobile phones. Nothing else is going to have a billion users. And it turns out Lockheed Martin spent a huge amount of money to develop the best lenses in the world for immersive visualization–many millions of dollars. They probably spent more on the lenses than most people have spent building entire VR companies. They built them for the F-35 fighter and other military needs. 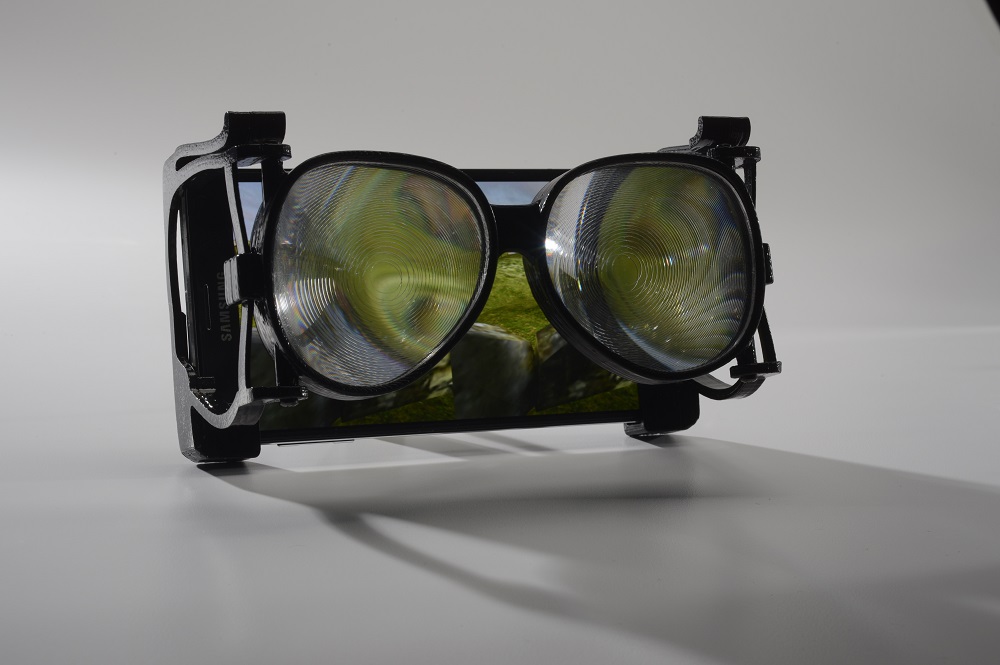 My friend, David Smith [founder of Wearality]convinced Lockheed Martin to spin out all this technology to his new company. So we have the ability to take the absolute best lenses–the brightest, most immersive, sharpest lenses, unlike anything in the other devices no matter how much they cost–put them onto a mobile phone for low cost. We sell them at basically the price of a cellphone case to anyone who buys a phone and they can be viewing in 3D. It’s an industry-defining technology. In the last 3 weeks since I’ve been on the job I’ve talked to almost everyone making VR devices and they all just can’t believe how good it is.

SPAR: Why are you going after the consumer market with Sky rather than sectors that have deeper pockets?

MJ: Because the goal is to put this in the hands of 100 million people. There aren’t 100 million architects, civil engineers, surveyors, astronauts. The good news is that among those 100 million people there will be plenty of people using this for professional applications. These are already better lenses with sharper display, more immersive, than anything else.

I want to build the “Volks VR,” that is better than any experience currently but that is affordable for everybody’s kids. I want to build something so everybody sitting in an airplane seat can have an IMAX movie experience with a device that costs around $50.

SPAR: How do think it will be used? What application will compel people to buy this: gaming or movies or something else?

MJ: Those who built the high-end VR systems that cost $800 have said that probably half their users watch movies. So what you’ve got with this is software that turns your phone into a movie experience better than an IMAX theater. It’s like being transported to a movie theater, and of course you can also watch 3D movies like Avatar and it’s fantastic. So it’s useful for people in the back of a car, in a hotel room, or who don’t have enough money to buy a huge LCD TV but have enough to buy an inexpensive augmentation. There are also lots of stereo 3D movies on YouTube, Blueray, and of course there are games which will work better than ever in this because it has a 150 degree field of view.

I believe that in the future, as on Facebook when people share snapshots, the views will be 3D and panoramic. They’ll wraparound so you can see the trees, waves, buildings, sand. So it won’t be a postcard view but an experiential view. And this is the perfect way to see that.

SPAR: Do you anticipate going into other sectors after this (e.g., training in nuclear facilities, offshore platforms, emergency response preparation)?

MJ: As a side effort we’ll sell the lenses to device manufacturers. It seems cruel for people’s kids to have the best lenses in the world on their phone when their parents who are surgeons or in construction have inferior lenses. The total VR industry is maybe half a million units, and we’re going to be a hundred million units. So it’s not like it’ll be a focus — we’re focused on 99% of the world — but the 1% of the world should have good lenses too.

SPAR: What do you think of the differences between virtual reality and augmented reality, and where do you see each of these going?

MJ: VR is something everyone can enjoy and engage in right now. AR is coming and needs more maturing time. But we’ll grow with the AR industry as it grows–we have many patents in with the same ultra-high quality, but in a see-through optical arrangement instead of a look-at optical arrangement. But they’re for a future time from a market standpoint.

SPAR: What is your go-to-market strategy for getting to a billion people. Or, how are you going to get there?

MJ: With phone companies, through network operators, and through mass retailers. We want this to come with your next phone. So anywhere you buy your phone, this will be on the shelf right next to it. You buy your phone, you get a case for it, you get the 3D glasses.