SKUR visualizes the difference between design models and point clouds of the same asset.

SKUR CEO Adam Cohen describes their software solution as a tool for “visualizing variance.” At the most basic level, that means it  takes a design model and a current point cloud of the same asset, and generates a visual representation of the differences between the two. It uses cloud computing and advanced algorithms to do it in a negligible amount of time.

When the team demoed the software for me, they pulled up one of these visual representations. It depicted a room with three pillars. Most of the room was green, meaning that the as-built scan (gathered with a RIEGL scanner) matched the design model perfectly. One pillar was yellow, which meant that it had shifted a little bit, and another was red, which meant that it had shifted a lot.

On this basic technology, SKUR has built a tool that could be essential to the construction and facilities management industries.

Mitigating Claims
“We live in construction,” Cohen explains. “Our usage case is as-built vs. as-planned, helping to identify those changes in a complex, rapidly changing environment.”

He says that one of SKUR’s main values is in mitigating claims, or clearing up misunderstandings. “By scanning more often and processing the data through the SKUR solution, we can give the contractors and asset owners a lot more vision into the project. This is an opportunity for enhancing resource management–whether that’s labor, supply chain, etc.”

SKUR has already presented their solution to some prospective clients, including one completing a very complex construction project in a dense urban area. The client recognized the value of the software—they were already using LiDAR to better see how the project was progressing. This was helping them find errors, prevent critical path delay, and save a significant amount of money.

However, the process they were using to track change was quite cumbersome compared to the SKUR solution. “They were only able to see small portions of the project at a given time and they were devoting significant time resources to find those errors,” Cohen said. “They understood the value of SKUR right away, not only during active construction but also in mitigating future claims. When you take the precision of LiDAR and leverage it with cloud computing infrastructure, the ROI for our software gets big quickly. That’s what we want—data that provides accessible, real value to our client instead of being cumbersome to analyze.”

So, Cohen asks, Why does “visualizing variance” matter? It’s an easy way to drive on time and on budget projects.

Better for the End User
SKUR’s other great accomplishment is making this data available to different kinds of subject experts on a job site. Instead of handing an executive a few terabytes of LiDAR scans marked up in different colors to indicate areas of change, SKUR aims to use machine learning to boil that data down to the simplest form possible. The goal is to provide the subject expert exactly what they need to know to make a decision, and allow them to share that information as needed. 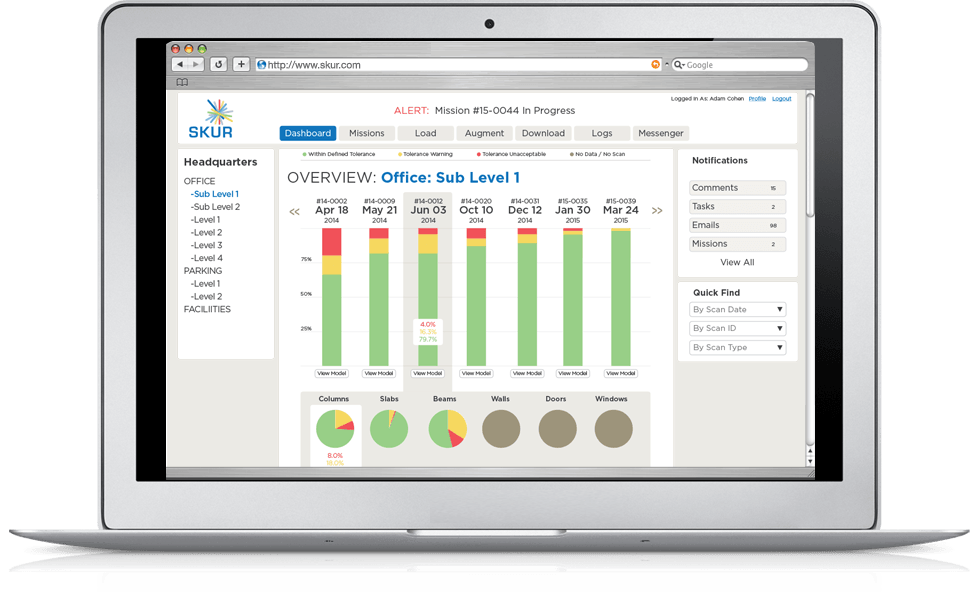 “As we go forward, we are working on how to take that data that’s visual, and bring it into a more machine-learning environment where the output is automated. This is the direction we’re going in,” Cohen said as he pulled up SKUR’s dashboard. The screen showed a series of bars, one for each day of the project. Each bar was broken up into blocks of green, yellow, and red. He pointed out that the bar graph was getting greener on each subsequent day of the project, which showed that the problem areas were being attended to. On the left was a list of locations that you could click to dig in deeper and look at the actual 3D comparison data, as necessary.

“This is a way for subject experts to consume the data that they need in an easy manner–that’s really what we’re going for here, not to interrupt the workflow, but to enhance the workflow. If the person who needs it is a project engineer, consuming it in a BIM environment, we do that with augmented files where it’s layer data. If it’s a subject expert that’s sitting at a desktop, or in the office, we can give them this dashboard data. That’s really what the SKUR solution is all about.” 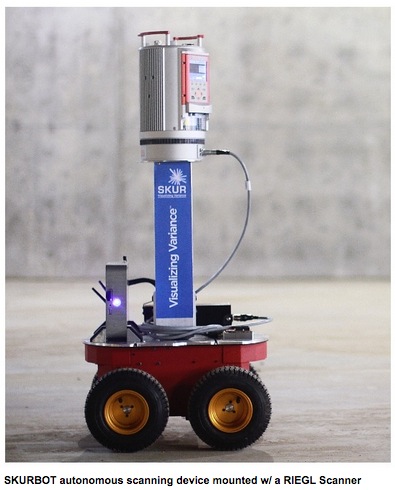 A Living Model
For SKUR to work to its full potential, it requires that you feed it regular scan data, and this has a few fringe benefits. By scanning regularly, you’re recording the development of the project. “SKUR’s not just about a particular point during the construction process,” Cohen says. “It’s really about bringing technology to bear through the asset lifecycle. So, if we start early in the construction process and we’re gathering data, we’re seeing the changes that are occurring in the site.”

When you use SKUR to identify variance, you’re also noting the changes that are made to the asset in the process of construction. Once you identify these changes, it becomes easy to incrementally update the as-built model while construction is in progress. This will make it easier for contractors to keep their model current. They can hand asset owners a true as-built model, one that even includes a full history.

Last but not least, if you’re wondering whether SKUR has a plan for making the model more useful during the operations and maintenance phase, the answer is yes. They’ve built their software to accommodate automated robotic LiDAR scanning, which they anticipate will have great benefits for data collection with precision and efficiency once the technology matures. Additionally, they have built the system to work with any geospatially oriented sensors, including those for temperature, pressure, and gas. If there’s a sensor, SKUR wants to use it to feed your model.

“Over time, by adding additional sensors that are geospatially oriented to the model the owner then has one model that can be utilized for a variety of purposes.  When we heard BP talk about the maintenance model that in itself is impressive and valuable, but imagine if the maintenance model was also the operational model and there was no distinction.  Our vision is that models become a true virtual representation of the asset, that they become part of the day to day operations for a variety of people and functions.”