This week during SPAR International 2015, ClearEdge 3D has announced version 5.0 of their popular Edgewise software. According to Chief Scientist and CTO Kevin Williams, the updates made possible by the company’s fifth NSF grant make ClearEdge 5.0 a “fundamentally better release” than previous versions.

Updates include a new Plant 3D plug-in, improved Revit integration that enables import of out-of-tolerance and non-standard elbows, and a new photo-realistic visualization engine called ClearView that the company says helps to deliver a photo-like view of a point cloud.

However, the major development is two significant improvements to EdgeWise’s auto-extraction capabilities. The first improvement, CEO and President Chris Scotton told SPAR, “is in our core pipe extraction algorithms. They’re so much more accurate now, and they virtually eliminate the problem of false positives. These new algorithms take it down to a problem about 1% of the time.”

The second improvement, Scotton told me, is an even more fundamental change: “We have created automated modeling algorithms that can extract gridded steel and concrete from point clouds.”

Rapid Modeling of Structured Steel
Whereas in the past, the process of modeling steel was completed member by member, ClearEdge has automated the process.

How does it work? Kevin Williams began his demonstration by opening a point cloud of a gridded steel structure. He used the existing EdgeWise extraction tool–which requires the user to select each piece of steel individually–to extract six pieces of steel from the point cloud. “Now,” he said, “I’m going to show you the new tool for finding additional repeated patterns of these instances.”

Williams selected one of the extracted pieces of steel, and then another above the first to tell the program to keep looking upward for more pieces. “I give it the first click and the second click,” he said, “and now its going to go in the direction indicated by those two pieces and find all the other relevant steel and fill them in.” The program found and automatically modeled five new pieces.

He repeats the process, telling the program to look for pieces across the width of the structure and then the depth. A minute or two later, the program displays a fully modeled gridded-steel structure. The process has taken about 4 minutes, about an order of magnitude faster than EdgeWise’s previous workflow.

Creating True As-Builts
The benefits of this new method, Williams explained, extend beyond ease and speed. In opposition to the arraying tools common to CAD applications, the program does not only copy a pattern to model the structure. “What it’s doing is actually comparing the pattern against the point cloud at regular intervals. It’s not just copying and pasting it, it’s actually fitting it to the point cloud.”

An unexpected benefit of this method is that the program can find I-beams that are rotated. Williams showed me that the program had found a number of beams with vertical ridges, even though the original I-beam it used to search the point cloud had a horizontal ridge. “When I first ran this point cloud,” he said, “I thought it was a mistake.”

The result of all these improvements is that no beams are off against the point cloud and the resulting models are of a very higher quality. “It’s rare for someone to actually go through and fit to the point cloud with the amount of accuracy we’re getting if they’re working on a project and actually getting paid for it.” 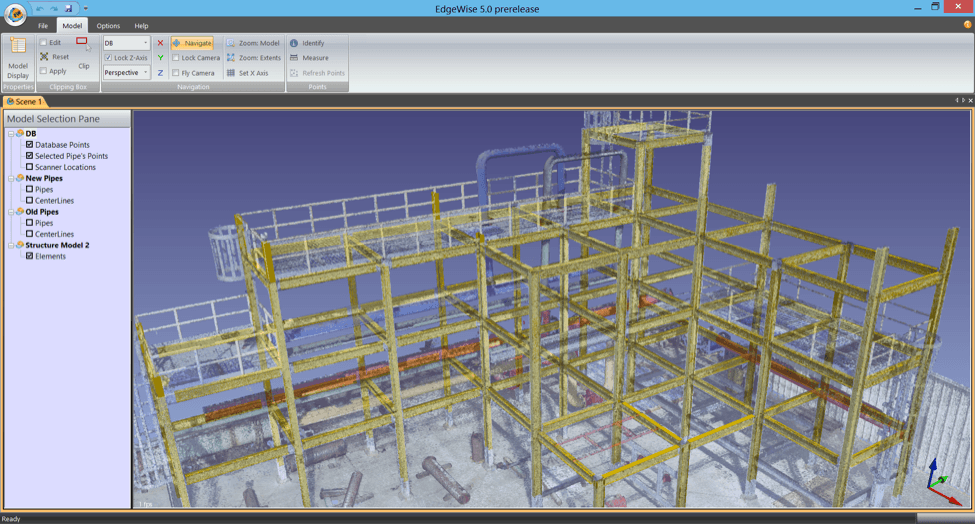 “These are true as-builts,” Williams said.

EdgeWise hopes that for those who model a lot of structure, the process will save a lot of time, and bring down the cost of creating a model. “There’s so much value to having it,” says Williams. “Point clouds are awesome, but there are a lot of things you can’t do with a point cloud. It’s been very expensive in the past to get those models out. Something like this goes a long way towards making it more economically viable. Hopefully, it will proliferate laser scanning throughout the industry.”

ClearEdge is presenting live demos of a closed beta during SPAR and is targeting a full release for April.

ClearEdge: ‘The most ambitious release we’ve ever done’