The alignment and registration of point clouds has been a laborious part of scanning projects, especially those at large scales or with complex geometry. Assembling numerous point clouds – already huge files – can be a daunting process and sometimes requires specialized hardware and powerful computers to get the job done. Some have attempted to save time by putting their computers to work overnight to process these files while they sleep. Even with this workaround, there’s always the chance to find registration failures or misalignments the next morning, requiring in a time-consuming and ultimately costly do-over.

Correvate, makers of Vercator point cloud registration software, has just released a solution that aims to eliminate the task of completing these tasks on individual workstations, and speed up the process for everyone. The newly-announced Vercator Cloud registration service allows users to harness the power of the cloud to rapidly align laser scan data more accurately and cost-effectively.

Automatic point cloud registration has been the major focus in Vercator. Originally released as a desktop version at the end of 2018, Vercator’s algorithms can identify features within a scan, and then uses those targets for alignment. Because there are thousands of these “features” in every scan, the results are reliable and accurate.

The new cloud-based service goes a step further to automatically align point cloud data created by stationary laser scanners. In the field, the targetless scanning can save time and costs and can enable larger projects to be scanned more quickly. When the data is taken back to the office, the datasets are registered in the cloud, eliminating the need for expensive hardware or slow, laborious registration, and can be easily shared.

Why use the cloud?

The amount of data being captured and recorded by scanners is ever-growing, and the processing side is having trouble keeping up. With cloud-based registration, a distributed network takes on the burden of the processing, removing the hardware limitations of any single computer or internet connection. Instead of spending budgets on individual workstations with heavy-duty hardware, users can use the cloud’s distributed processing power to shoulder the load with ease.

The cloud solution also allows for much easier sharing of project data – rather than physically transferring and downloading files between workstations, the cloud-based data can be shared securely with anyone, anywhere. According to a press release from Correvate, it can also be integrated with your company’s existing cloud storage, and API access is available upon request, opening options for customization to existing workflows.

The user interface for Vercator has been refreshed with more user-friendly controls and an intuitive workflow. Like the original Vercator software, the software still supports all the major scanner manufacturer formats, but goes a step further.

With the new release, you can now load a scan network from the Vercator mobile app or plan your own using the handy network planning tool, set your scan parameters, then just hit ‘register’. With support for all the major scanner manufacturer formats, this makes preparing raw laser scans significantly easier. Once complete, export the files and share with colleagues and collaborators.

There’s also been an update to the scan network tool, which now gives users the ability to pair up scans in sequence with drag-and-drop functionality. This fundamental step in registration can be carried out quickly and easily, using anything from a 2D site plan to a roughly sketched scheme on a notepad. 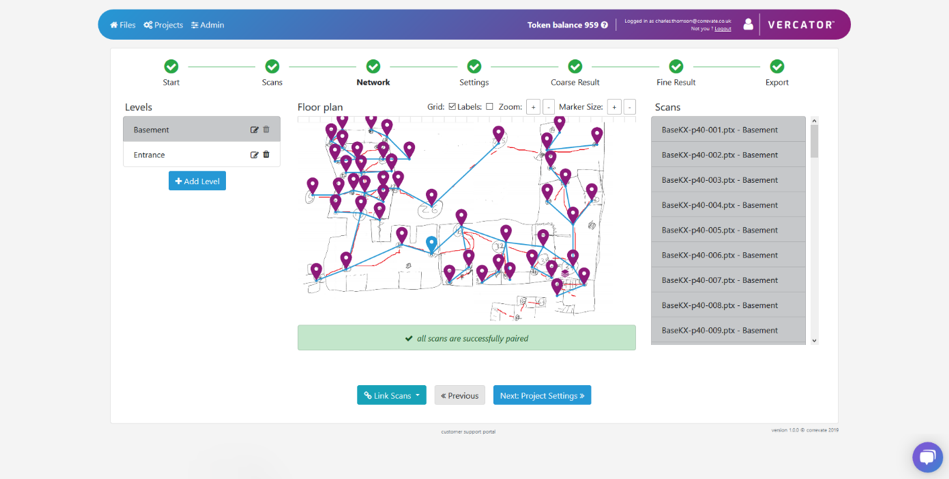 The new release includes a “scan network tool” that aids in the pairing of scan locations.

Vercator Cloud operates as a pay-as-you-go model, allowing users to subscribe to the service at a level that makes sense for their particular needs. The service can also be turned on and off as required, which can also be an additional cost saving in between projects. To get access, users should start with the free trial that allows for the registration of up to 100 scans over 30 days. To continue using Vercator Cloud, membership is required.

The cloud service system uses a token-based system where users only pay for what is used at 1 token per scan registered. Monthly membership costs 20 tokens, which provide 100 GB of storage, and allows access to registration. Large-scale users can have contact Vercator to this membership cost waived.

Vercator might be the first company to launch cloud-based point cloud registration, and it certainly demonstrates the potential for more cloud-based solutions in processing in the future. With 5G on the horizon, the cloud will only become a more powerful place to process and share large, data-heavy projects.

Watch a video demonstration of the software here: