The process of registering point clouds together requires crunching huge amounts of of data, and even the most automated solutions can require a lot of manual work. Any software that can reduce the amount of effort the user puts in—without reducing the quality of the final product—is bound to stand out.

This is the niche where Correvate hopes to make a name with its new Vercator software. The solution promises to register your 3D point cloud with a minimum of user input, without the need for targets, with up to an 80% reduction in registration time—all without sacrificing accuracy or quality in the final data.

Product manager (and former surveyor) Charles Thomson tells SPAR that the software is based on technology developed at University College London. The algorithm at Vercator’s core approaches the problem of targetless registration in a novel way that makes it more robust than many existing methods.

Most existing registration solutions work by identifying features such as artificial targets, planes, lines, or other geometric primitives in each scan, and using those objects as references to align overlapping scans. Vercator, on the other hand, uses “advances in machine learning” to recognize what Correvate calls “natural features” in the scanned environment, and uses those as targets for alignment. Correvate is vague about what natural features it looks for, but they will say that there can be up to tens of millions of them in each scan. That makes them much more numerous than planes and lines, and obviously more numerous than manually placed scan targets. 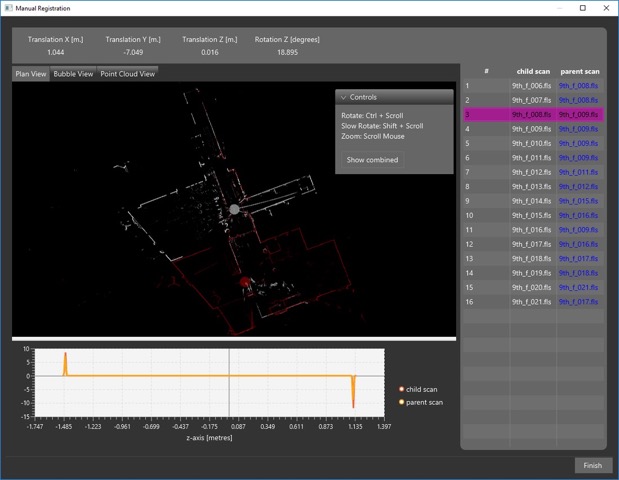 Vercator’s other innovation is to use vector analysis for fine registration. Here’s how it works: Once Vercator recognizes the natural features in a scan, it determines their location and orientation relative to the scanner, and then represents this information with vectors. As Thomson explains in a blog post, the vectors for each scan are pulled back to a single point, allowing each scan to be represented as a sphere of vectors. Next, Vercator compares the vector spheres for two overlapping scans, finds shared patterns, and use those achieve tight alignment. (If that wasn’t technical enough, dig into Dr. David Selvieh’s article in Geomatics World here, where he goes into much greater detail about the process.)

The upshot of this approach is that Vercator is able to offer more automated registration, at a faster speed, with fewer misalignments that need to be corrected manually, and at a quality equal to industry standards.

“When I was a surveyor,” Thomson says, “I found a lot of automation actually makes the process longer—in some cases you were having to fix what the automation hadn’t been able to solve. We feel our advance in technology reduces that by increasing the robustness of the automation.”

The company is also careful to manage expectations. They tell me that you’ll still see some of the same limitations that apply to other cloud-to-cloud registration methods or SLAM algorithms. A completely blank corridor, for instance, doesn’t offer the software enough features to make a good registration. Correvate also cautions that users should ensure a standard amount of overlap between scans—60%. Though the software is “fairly reliable” at lower overlaps, this amount ensures the best results. 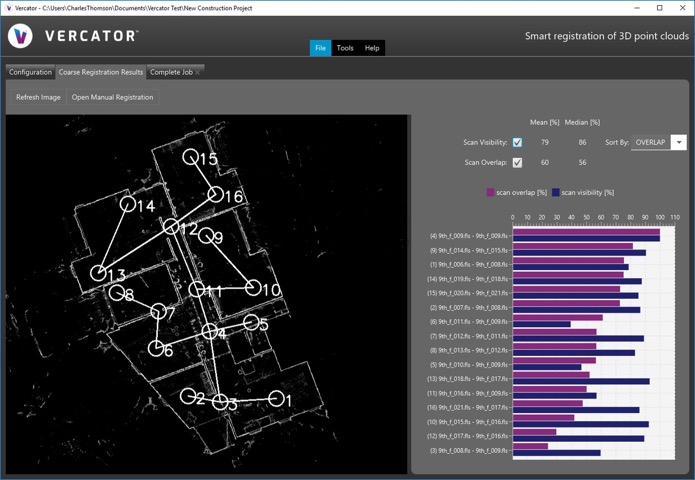 A network of scans, and the coarse registration results.

Most of the user input comes at the beginning of the process. You add the scans and pairing scans that overlap to create a very rough network that links the scans together. (See the above image). Next, you select some configuration settings and go.

Now Vercator runs through several processing stages. First, it looks for features in each scan and runs a coarse registration. Next, it produces a registration report that enables users to verify the quality of the processing so far (See, again, the image above). This report includes information like the amount of overlap, whether there is visibility between scans, and so on. “These sort of numbers,” says Thomson, “give you an intuition whether the registration has succeeded or not. You might have two scans with low overlap, and that might seem a bit problematic, and you’d want to check whether the automation has worked with those scans.”

This verification step gives users an easy way to ensure that everything is “along the right lines” before moving on to the final, much more intensive registration step. After performing a few quick steps and verifying that the registration is going well, you can leave the computer to do its work with confidence.

At the end of the final registration, the system generates a report with more statistics that indicate the overall accuracy.

Though this process is already very automated, Vercator wants to automate it even further—starting with the identification of overlapping scan pairs. “It’s quite manual at the moment,” says Thomson, “but we’re looking at automating that in the next step of our development because it’s the part with the most user input.” The good news is that the algorithm is built in such a way “that it could probably do quite a good job of that.”

Compatible formats as of December 5, 2018

Correvate’s long-term goal is to use its core technology to continue bringing automation to the scan to model process. In the future, they’d like to make it such that you can load raw data into Correvate’s automated software solutions and the system will automatically produce whatever final product you need.

Thomson tells me that Correvate also understands that users today work in a number of different applications and ecosystems. “That’s why file formats are obviously a big deal for a product of this nature. So we have an agreement with FARO to support their data, and we are looking at other manufacturers’ data that we want to support natively to help aid the process.” Vercator also supports e57 and other text-based formats.

“We certainly want to have an open philosophy,” Thomson concludes. “With interoperability, we will try to keep open. Certainly if we went down the modeling route more in earnest, then we would want to keep that open philosophy as much as possible.”