TORONTO – Students in the University of Toronto’s Forensic Science program will have a new offering available to them in January: “Introduction to 3D Crime Scene Mapping and Reconstruction.”

“It’s going to be the first of its kind, as far as I know,” said Eugene Liscio, head of 3D forensics firm AI2-3D and the incoming president of the IAFSM (International Association of Forensic and Security Metrology). “There are workshops and other things that you can go to, but nothing in the academic world that I know of.”

Offered initially to fourth-year university students, there are currently 12 potential future forensic scientists signed up for the course, in addition to a police officer from a local forensics unit.

Liscio said he got a number of sign ups after a recent one-day outing he led as part of a larger course on grave excavations. “I taught them how to take the photos, link everything together,” Liscio said. “The method is important. They followed me around as I showed them how to take the shots and it really worked out well. It gives them a different idea of how you could document or map something that’s traditionally done by hand and is really time consuming.” By simply using 123D Catch, all 25 students were able to walk away that day with a scaled and modeled 3D image of a grave.

You can see some results of their work here, exported out of 123D Catch into MeshLab: 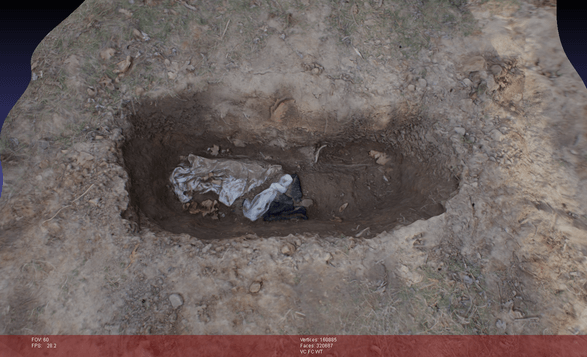 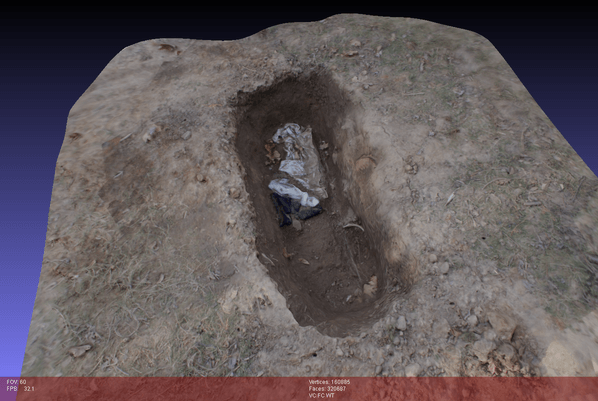 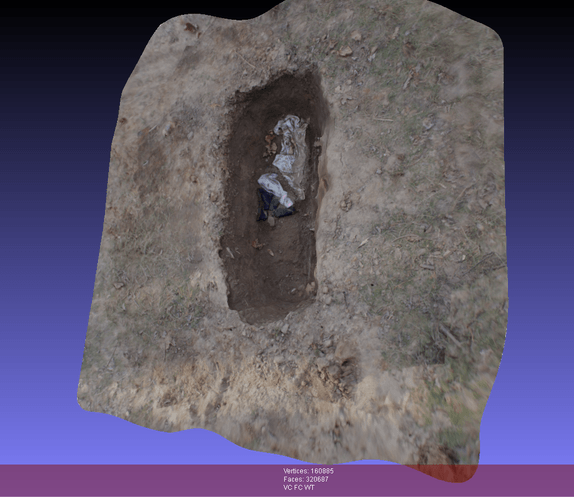 Looking forward to the full semester-long course, Liscio said he’s planning on covering 3D blood spatter analysis, “using a laser scanner to map out the scene and then take high resolution photographs and map them onto the point cloud and then calculate the trajectory back”; suspect height analysis, “using the laser scanner as control for the photogrammetry”; general best practices using total stations and laser scanners for scene mapping; and legal considerations for admissibility and preparing courtroom-ready visualizations. 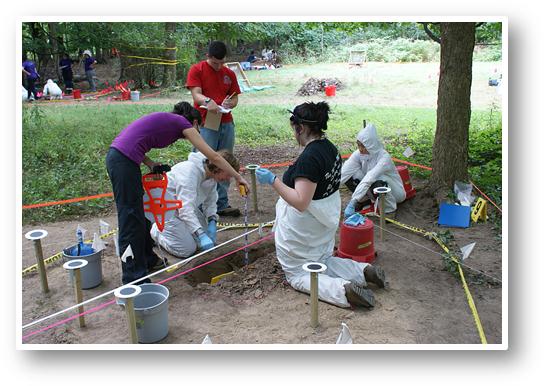 Five students measure a gravesite in a “traditional” manner. A 3D data capture workflow could cut their number to one.

The course is designed to be appropriate for people looking to get into crime scene investigation and police work, and the instruction would be cover those looking to document roadway accidents “or anything else you want to measure,” Liscio said. “There’s really nowhere to go to become a 3D forensics guy, so you currently have to accumulate all these tools on your own with experimenting, research, attending conferences, and this should hopefully take the place of some of that.”

The University doesn’t currently have its own laser scanning equipment, but Liscio has put in a budget and they may soon buy one. If not, Liscio may have to initially supply some of his own equipment, he said.

He’ll also have to polish up his lesson plans as he teaches his first semester-long course: “It’s a little nerve-wracking.”

A detective in the 3D classroom