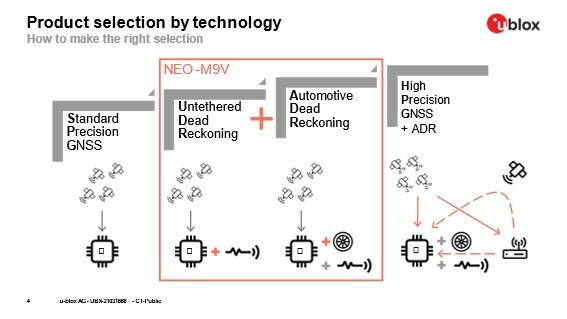 Mathias Vetter from u-blox explains the differences between the different GNSS technologies as follows: “Regular standard precision GNSS (SPG) receivers rely on satellites only to compute its position. SPG receivers with dead reckoning (DR) technology use further inputs: UDR uses a 3D gyroscope and a 3D accelerometer, a so-called inertial sensor or inertial measurement unit (IMU). ADR can make use of vehicle speed input as an additional source of information for the sensor fusion. However, vehicle speed is not always available or accessible.”

ADR has advantages compared to UDR, especially with long signal outages, while UDR is still much better than a regular SPG receiver when performance in urban area is key: the claim about 3x better positioning accuracy refers to this use case. Both technologies also require a so-called vehicle dynamic model for which the fusion is optimized. Traditionally, an automotive model is used. The u-blox NEO-M9V module now also includes a dynamic model for micromobility vehicles (see below).

Fusing GNSS data with an independent sensor (IMU) and/or vehicle speed input still allows to have a reliable position, velocity and time (PVT) output when signal conditions get worse because they get reflected on buildings in urban area, which is the so-called multipath effect, or signals get completely interrupted which typically happens in tunnels and underground parking.

The receiver is based on the u-blox M9 platform, which stands for the chip generation. From a hardware perspective, the NEO-M9V modules includes the u-blox M9 chip, and all other components needed: IMU, flash, TXCO, SAW, LNA and many other passive components. Furthermore, NEO-M9V comes with an optimized firmware that is preloaded into the module flash, and fully runs on the chip, omitting the need to integrate any functions into the host system. 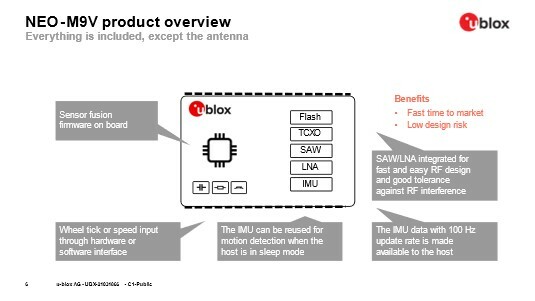 The EVK-M9DR is typically used together with a laptop to evaluate the performance of NEO-M9V. This is straightforward with USB connections being used. After having obtained satisfactory results, customers can create their own board and design-in the NEO-M9V module together with other functionalities, depending on the use case.

The horizontal position accuracy as shown in the NEO-M9V module’s product summary is 1.5 m CEP (with SBAS); 2.0 m CEP (without SBAS). The acronym SBAS stands for satellite-based augmentation system, which mainly helps to correct the ionospheric error, which arises due to the varying signal delays in the ionosphere. CEP is the median error, which is a statistical value: half of the real position errors are smaller and the other half larger than the stated CEP value. It is important to note that the value holds for open sky environment, says Vetter. The errors are larger in typical use cases.

Vehicle fleet managers seeking to cut costs and lower their carbon footprint depend on accurate positioning and navigation data to reduce fuel consumption. Additionally, accurate odometry data (which is the same as distance reading or mileage) is key to fleet managers for billing and compliance.

With regard to fleet management, the technology companies building the black boxes used in this market segment want to limit their product variants, explains Vetter. “Because speed information is not available or accessible in every end use-case, these companies typically would select UDR in the past. Now, they can select whatever is more convenient or better suited for each end-customer while being able to cover everything with one single hardware design.”

E-scooters, bikes, e-bikes and e-mopeds are also used by sharing micromobility operators to provide mobility-as-a-service to end users. Known names are Bird, Lime, Voi, Dott, and many others. They always operate in cities and need accurate GNSS positioning to locate the vehicles: users need to find them according to the information displayed in respective apps while operators want to easily locate them for battery replacement or maintenance. Insufficient position accuracy is directly correlated with operating costs in latter case when staff wastes time locating vehicles.

Geofencing is needed by micromobility operators to enforce bans when driving is not allowed in certain city areas like parks and sidewalks or to enforce speed limits by limiting the vehicle speed according to the specific regulations area by area. NEO-M9V has a very basic geofence feature which only allows to detect if the position moves away by a certain distance from a given point. As such, it is typically use for theft detection. Micromobility customers usually take the PVT (positioning, velocity, and time) output from the receiver and build their own, more complex geofencing functions on the host system.

An additional use for the module is tracking for insurance business: the NEO-M9V has a wake-on-motion feature that allows to detect unexpected movement. This information is useful to detect potential thefts or when vehicles are towed away. Furthermore, accidents can be detected when a parked vehicle is involved, and this happens quite often. Because of the DR, the vehicle location is also available in underground parking.

NEO-M9V also features dynamic models optimized for both cars and e-scooters. By adapting the algorithms of the dead reckoning solution to the behavior of these use cases, these dynamic models further increase the quality of the position reading. For example, they constrain the allowed vehicle movements, as a car does not suddenly move vertically or laterally and does not tilt.

Furthermore, assumptions can be made about the dynamics like admissible acceleration, says Vetter: “such constraints allow to extract the most useful information from the rather inexpensive IMU while not allowing noise to adversely affect the PVT solution. The new dynamic model for micromobility has constraints and dynamics that differ from an automotive use case. This new model was verified with tests on real hardware, i.e. an e-scooter.”

NEO-M9V is based on the u-blox M9 GNSS technology platform. Its ability to track up to four GNSS constellations maximizes the number of GNSS satellites within its line of sight at any given moment. Vetter: “Four GNSS is the maximum you can get currently. These constellations are American GPS, European Galileo, Russian GLONASS and Chinese BeiDou. All of them fully cover the earth, while each of them has its own prioritized geographical area. u-blox M9 allows to access all four GNSS simultaneously, increasing the likelihood of signal availability and good signal quality in all operating conditions including urban areas.”

Integrated SAW and LNA filters offer a great interference mitigation for a robust solution, accelerating product design and shortening time to market. Vetter explains that surface amplitude wave (SAW) filters are band-pass filters that allow to filter out parts of the spectrum that are not relevant for GNSS reception and that such RF interference can drive amplifiers into saturation, something one would try to avoid because of the insufficient amplification and non-linear behavior in such state. Low-noise amplifiers (LNA) are used to increase the GNSS signal power levels, explains Vetter: “GNSS signals are very weak and need to be amplified. Active GNSS antennas already include such an LNA. Having the LNA included in the module helps with use cases using passive antennas while not having adverse effect with active ones.”

“Having both SAW and LNA included into the module allows customer to simplify their design by limiting the RF design to antenna related aspects only. At the same time, the chosen design is very robust, helps to avoid design cycles and improves time-to-market. It is therefore optimized for any industrial (non-first-mount automotive) application”, concludes Vetter.