Recently, Trimble teamed up with CyArk to digitally document historic sites related to the Trans-Atlantic Slave Trade between Western Africa and the Americas. The hope, they said, is to “create a lasting record which tells the complex and harrowing stories of the Atlantic Slave Trade through a new 3D lens.”

And the way they went about it shows a great deal of attention to the details. 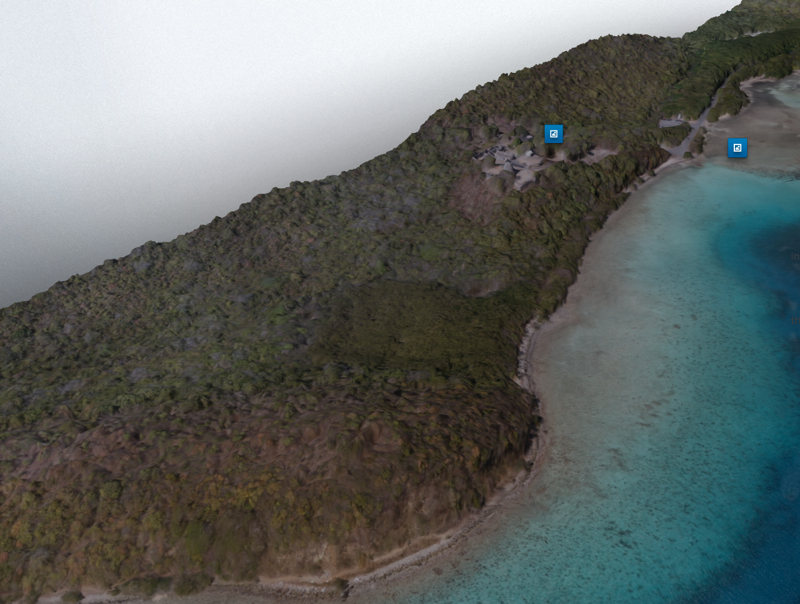 An aerial shot of St John from CyArk’s website.

How they did it

Richard Hassler, product manager for SketchUp, explained to SPAR 3D how the team collected one of the bigger sites: the Annaberg Sugar Plantation. Located in St. John, the plantation held more than 500 slaves, who performed hard labor clearing the large hillside, as well as planting, harvesting and processing the sugarcane.

“For that site,” he said, “we used a UAS mapping system—a Trimble UX5—to collect. We collected the side of the mountain using UAS flights, and produced a digital surface model of the entire mountainside.”

They used this surface model as a contextual basis for embedding other, more detailed data. “We used the same GPS system that was used for setting the targets for aerial photography to function as a base to collect ground-based data around one of the largest project sites, which was the sugar-cane processing facility.”

This ground-based data included photogrammetry-based point clouds, high-resolution scanning, and panoramic photography for the entire site. “Since it’s all in the same coordinate system,” Hassler said, we could embed it in the aerial photography of the entire mountainside.” 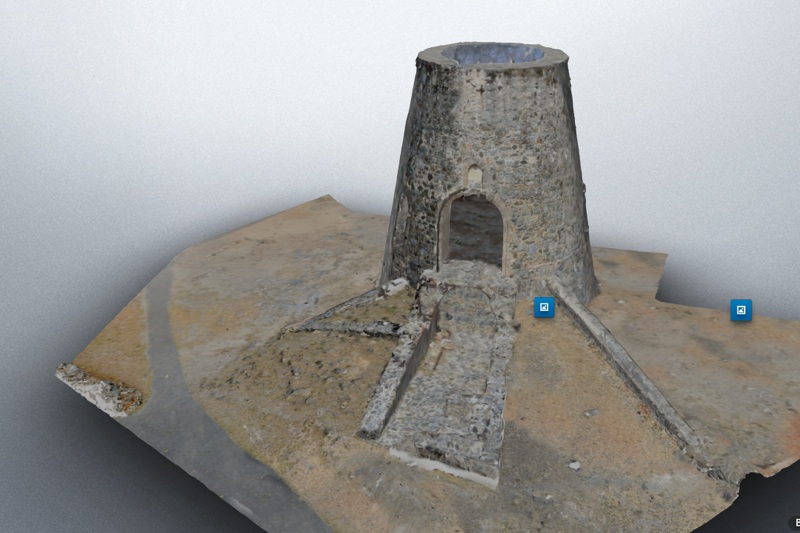 The Annaberg windmill, where sugar cane was processed.

It’s not about scanning

With all this scanning and data capture, you might be surprised to find that their goal was not simply to capture these sites so we can marvel at the cool-looking data.

“It’s easy to lose focus with a project like this and look at the owners’ big mansions,” Hassler said, “rather than dwelling on, ‘Where was the slave living? What were their lives like?’ So we want to be sure we’re bringing the focus back to the actual enslaved people who suffered so much.”

With the four sites that Trimble and CyArk embedded in the aerial photography of St. John, you can zoom in far enough to “see the drawings done on the wall of the small room underneath one of the structures, and then go all the way out to where you’re seeing the entire site.” Each site also includes historical context–the plantation, for instance, includes photographs and drawings from the time when the site was in operation. Combined with 3D data, this should go a long way toward giving viewers a window into the lives of the enslaved people living and working on the plantation.

Considering the value of using these visualizations as an education tool, you won’t be surprised to learn that CyArk and Trimble have worked on standards-based curricula with the Boulder-county school system in Colorado. They’re even bringing teachers out to go scanning with them.

A SketchUp model of the slave quarters generated at another site in Natchez, Mississippi.

It’s about the end-products

Part of this project’s goal is historic preservation the way we’re familiar with it. If the site is destroyed in a hurricane, for instance, it will be valuable to have this data on record for posterity—and even future measurements.

But the team worked to generate enough deliverables that you could get any conceivable sort of data or experience you’d need from their captures. They produced orthorectified imagery, “which could potentially allow archaeologists to find new sites, or new features that were buried in jungle.” They created DSMs, panoramic imagery that allows you to look around from a number of vantages, and gathered GNSS positions for key points on the project.

Of course, there were different kinds of visualizations as well, including a SketchUp models for the important structures on the site, video flythroughs, a giant 3D-printed model, and dense registered point cloud data.

The lesson is that the scanning and data capture are important–but nothing if the team doesn’t pay attention to the end goal. In this particular case, that goal is preserving important sites by every means possible, but even more important is helping to communicate the suffering caused by the Trans-Atlantic slave trade.

BIM workflow gets boost with SketchUp 2014