The Importance of Achieving Certainty in AEC

The importance of understanding what tomorrow’s building processes and construction technologies can look like has never been more critical, and it’s why these topics and more were explored in numerous ways at the recent AEC BuildTech Conference & Expo. Featuring six separate tracks focused on numerous topics, the event explored many of the biggest changes and challenges that have transformed the industry over the past few years while also detailing how all of these things might impact the future.

Steve Jones, Senior Director of Industry Insights Research at Dodge Data & Analytics, highlighted this transformation of the space during his keynote presentation at the event. His presentation was titled, “Key Trends Transforming The Global Construction Industry”, and he made sure to discuss the many ways in which the industry has changed and how these changes will redefine expectations for everyone.

The theme of “certainty” came up over and over during Jones’ presentation, and it’s ultimately the reason the digital transformation of AEC as a whole is so important. The certainty that someone expects when they purchase a car in terms of the cost and delivery is a given, but it’s not the same way in AEC. Tools like BIM enable this certainty since they allow stakeholders to have a better sense of the costs, process, tools, etc. that are needed to complete a given job.

Jones discussed that technology needs to be leveraged to increase certainty. As one example of what that looks like, Jones mentioned the reality capture efforts at Madison Square Garden which the team laser scan the entire project to confirm what they did and needed to do with their design. Those scans enabled a level of certainty with their design that wouldn’t have been possible otherwise and helped the team to avoid the delays and issues that would normally have plagued a project of this type. It’s an approach that enabled design-build in real time in a way that was previously not possible.

The certainty that can be achieved in AEC can happen in various ways via multiple tools, and Doxel has created an incredible example of what they can look like. Their company uses autonomous robots to capture images and laser scans every day. Artificial intelligence measures progress and inspect quality so that teams increase productivity with timely identification of issues. As another example of a tool that is enabling certainty on a whole new level, Jones showcased how the HoloLens can be utilized to such a degree that workers don’t even need to use a measuring tape when putting something together.

Jones talked through many of these examples and presented numerous facts and figures about the impact of achieving this new level of certainty, but one of the most striking concerned improved project outcomes when BIM is used by engineers and trades. The improvements when doing so are as obvious as they are powerful. 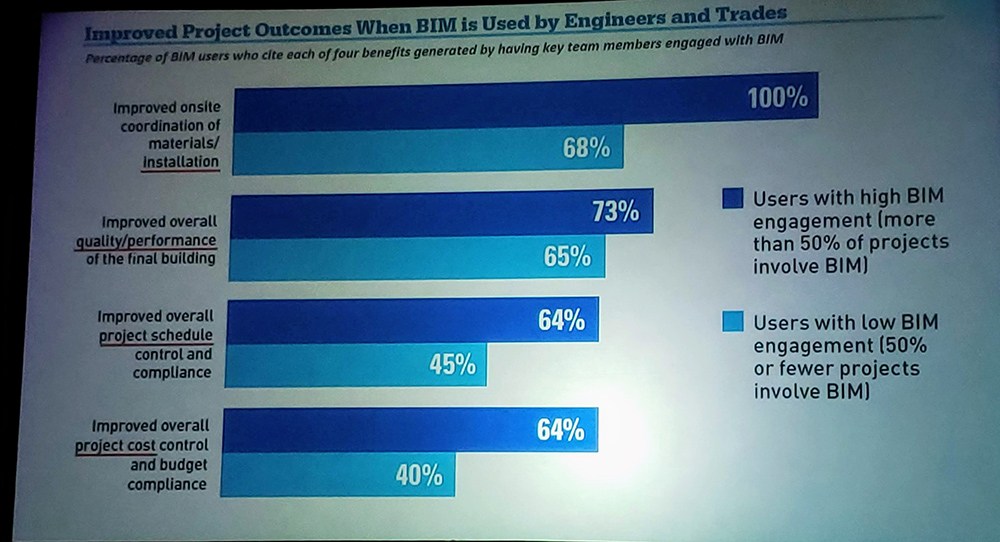 Ultimately, these tools and technologies that can increase certainty are all about driving integrated digital workflows among team members. Using the cloud to collaborate, reduce time for communication and increase visibility will become more and more important. The future of AEC is ultimately about tech-driven processes, where integrated data-rich workflows can be utilized. It’s a future where certainty regarding every stage of project is a given, which means understanding what tools can help enable that certainty is critical for any AEC professional.

To find out much more about the topics and trends that Jones talked through, check out the various reports that he and his team have made available at https://www.construction.com/toolkit/reports

5 Questions that Geo Week will answer for AEC Professionals