When I started with SPAR3D in 2014, a 3D capture workflow still required some big equipment, three guys, and at least one PhD to perform (I’m exaggerating, but you get the point). By the beginning of 2019 that had changed significantly. We now have well-established solutions that enable users to capture photos with their smartphones and make good-enough 3D models using photogrammetric processing, not to mention handheld solutions and even autonomous mapping drones and robots. That’s a lot to happen in such a short span of time—and a new Stockpile Reports solution shows why the industry not nearly done yet.

The Stockpile Reports for Logistics product is a newcomer to the a surprisingly small group of products that use low-cost, fixed cameras for 3D capture. The Stockpile Reports system allows users to stage fixed cameras (or even iPhones) as needed “in warehouses, shipping terminals, and storage yards to automatically calculate inventory levels.” The measurement process can be scheduled to run automatically as much as you want throughout the day, and even to trigger when motion is detected. Once the system has taken measurements, it sends alerts or notifications to the pertinent system to trigger re-orders and supply the system with the inventory levels necessary to organize delivery.

This is where the promise of the system becomes clear: Stockpile Reports has found a way to move things forward by removing humans from the 3D capture workflow. Recently, SPAR sat down with URC Ventures CEO David Boardman, who explained the genesis of the system, what made it possible, and where things could be going next for 3D capture technology. 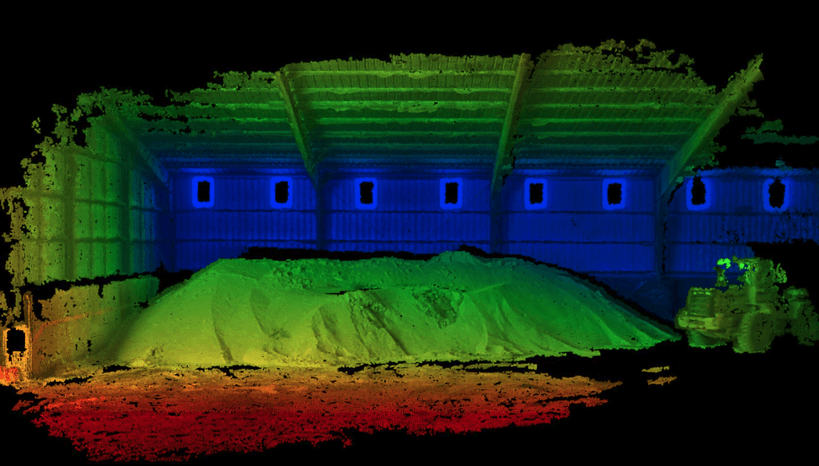 3D capture of a stockpile using a fixed-camera system.

Boardman says that, in the last year, he started getting a lot of calls from companies interested in using the Stockpile Reports technology for logistics use cases. Because these companies didn’t have the right hardware solution to make capture fast and easy, they were finding it too difficult to get the data they needed. It was bad enough that many of them would just send a guy out to eyeball it. “Is the shed half full? Is about empty? Do we need to make another order?”

Boardman explained why this problem wasn’t an easy one to solve: You have materials moving in a variety of ways, on ships, trains, and trucks coming in and out of ready mix plants. The material levels are changing near-constantly, which means they need to be measured every 15 minutes or so. That counts everyone’s favorite capture device (the drone) out of the running. It also counts out the smartphone, which some Stockpile Reports customers tried in logistics applications but it to be too much effort.

The answer that Boardman and his team devised is fixed cameras. They don’t require sending people to the field to get the data you need. They can capture data at regular intervals so you don’t have to worry about missing something. As a bonus, they’re also much, much cheaper than they used to be, since the market for home security cameras, doorbells cameras, and smartphones has driven a lot of innovation and competition in that space. In 2019, Boardman tells me, we now have access to sub-$100 cameras that someone can mount permanently in the field, in a variety of configurations, and get the 3D data they need.

The power of processing

For one, Boardman says, getting 3D data from fixed cameras is not just a matter of snapping a few photos and correlating them. “I don’t want to tell too much, but these cameras are moving and wiggling and so on, so there are are some smarts in there that we had to build to make this work. You’re not going to just tie two cameras up to a photogrammetry software and get what you need out of it.”

There are other smarts at play, too. “We’re actually taking several different images and then doing some fancy image processing to pull the most data out of every pixel,” he said. (We recently published a piece by Stockpile Reports explaining why this approach—known in the smartphone world as computational photography—is making a big difference in the quality of the 3D data we can gather with small cameras.)

And that’s not even mentioning the power of the processing that Stockpile Reports has built into its earlier products, and carried over to the new one. Or the machine learning that has been added perform tasks like automatically removing obstructions, like equipment and stackers. 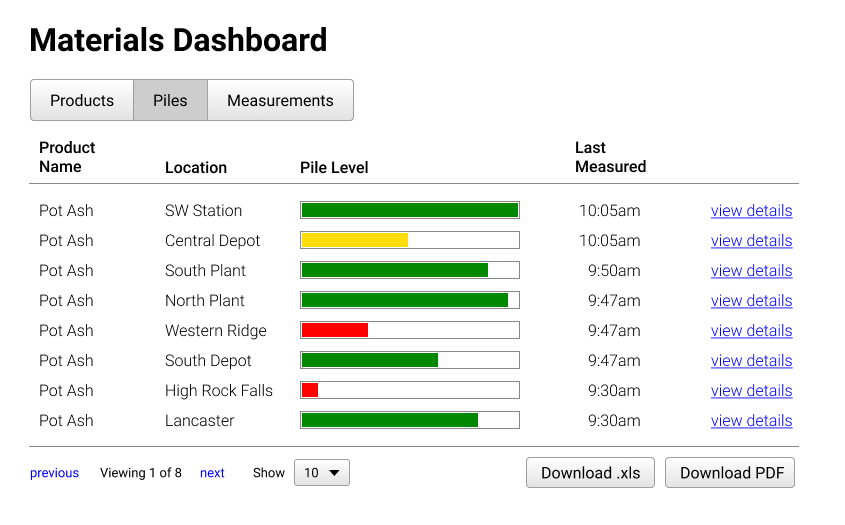 What a simple, automated 3D-capture workflow means for a business

In other words, the solution has quite a bit going on behind the scenes, some of which I suspect Boardman didn’t even share with me. But it’s clear that the system’s goal is to integrate a lot of advanced technologies so that they just work together, at a fair price. “I can’t put a number on it yet,” Boardman says, “but we’re hoping we can get camera systems deployed for less than a thousand dollars. Then, they just flip a switch and they’re up and running, getting this data at whatever interval they need to make good business decisions about shipping materials or receiving materials.”

This simple workflow, says VP of product Tony Jacobson, will have a direct effect on the bottom line. “We see this thing happening where customers are spending a lot of time and resources on dispatch and ordering and sending people to go check the piles multiple times a day.” If the Stockpile Reports Logistics solution can keep an eye on things and automatically generate an order without human intervention, he says, that means a lot of money saved. We’re talking in the region of several hundred thousand dollars per year per site for a small regional company, and multiple millions overall.

What this kind of workflow means for the industry

“I think the big message here, is, yes, drones are great and fantastic, but they just carry cameras, right?” says Boardman. “There are lots of ways we can get cameras around—whether that’s sticking them on people’s heads, on walls, on trucks, or flying them around. This is a good preview of the next chapter, where all of this is going, where drones have helped pave the way.”

Boardman believes the reality is that, at the end of the day, it’s all about data processing, and how to get the right data for the job as quickly and affordably as possible. To him, that means putting sensors everywhere: “The end game is millions of images taken per day for a given operation, coming from multiple sources, including drones, phones, fixed cameras, wearable cameras, and cameras on trucks. That’s the big story here. We’re on to the next step.”

For more information about Stockpile Reports for Logistics, or for a price quote, get in touch with the company directly here.

How Does the Crane Camera Solution from Pix4D Impact AEC?