Using 30-meter-resolution satellite images, researchers have created the first map measuring deforestation worldwide and revealing the loss of 2.3 million square kilometers of forest from 2000 to 2012.

“Intensive forestry practiced within subtropical forests resulted in the highest rates of forest change globally,” according to the study, published online Nov. 14 in the journal Science. “Boreal forest loss due largely to fire and forestry was second to that in the tropics.”

The images captured by Landsat 7, launched in 1999 as the seventh satellite of the Landsat program with a primary goal of refreshing the global archive of satellite photos.

Landsat 7
Landsat 7 images were obtained from a free archive at the U.S. Geological Survey’s center for Earth Resources Observation and Science (EROS) and processed by collaborators on the study from Google, who used the planetary-scale, Google Earth Engine platform to crunch the images in a matter of days compared to the 15 years it would have taken a single computer.

Check out the global map of forest change here.

The map reveals that forest loss in the tropics increased by 2,101 square kilometers every year during the period of the study. Subtropical forests were found to have the highest rates of change, largely due to intensive forestry land uses, the study said.

Indonesia had the largest increase in forest loss, more than doubling its annual loss during the study period to nearly 20,000 square kilometers in 2011-2012.

The disturbance rate of North American subtropical forests, located in the southeast U.S., was found to be four times that of South American rainforests during the 12-year study period, with over 31 percent of U.S. southeastern forest cover was either lost or regrown. 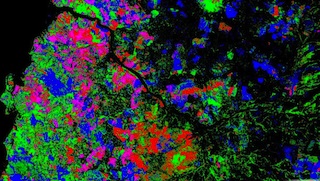 The mapping database will be updated annually to quantify all forest stand-replacement disturbances including logging, fire, disease or storms.