Dr. Chris Fisher’s keynote at Geo Week 2022 expressed the urgency of documenting and studying the planet as completely as possible - before it is irrevocably changed.

At the 2022 Geo Week Conference, keynote speakers addressed the power of geospatial data, the status of national mapping initiatives, and even future uses of lidar outside of our planet. Among them was a presentation from a slightly unlikely presenter - Dr. Christopher Fisher, an archaeologist and professor of anthropology at Colorado State University.

While Dr. Fisher and his team have been using lidar to discover and document archeological finds for over a decade, Dr. Fisher’s recent work is focused on a new task: creating a 3D dimensional record of the entire planet.

The project, known as the Earth Archive, is an ambitious one - to take detailed lidar measurements and scans of the entirety of the globe; from its most remote and wild locations to the densest urban jungles. The project’s motivation is the accelerating changes being seen that are consequences of climate change, prompting Dr. Fisher to do something before the opportunity to study these critical and fragile environments slips away. 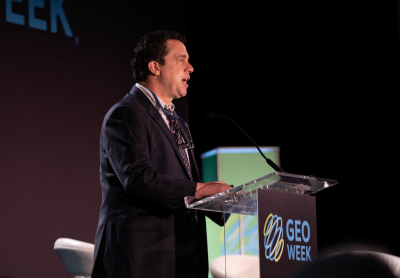 “It’s a great time to be a scientist - with the tools and technology to understand our planet like never before,” Dr. Fisher said in his keynote. “But we’re running out of time. In the coming decades, forests will turn to grasslands, the shapes of continents will become unrecognizable due to rising sea levels, and vast swaths of the world will become desertified.”

The Earth Archive is a non-profit that plans to use airborne scanning technology (lidar) to create a 3D “digital twin” of the planet, providing science, industry, or anyone else with a baseline for future comparisons or study as climate’s far-reaching effects unfold over time. Backed by sponsors that include Voxelmaps, GEO1 and Bayesmap, this ambitious project has hit the ground running. This attempt to preserve the Earth's “global, cultural and ecological heritage” is no small task, of course.

“We firmly believe that the answer is to promote a high-resolution lidar scan of the entire Earth’s surface, starting with areas that are most threatened. To the general public, this sounds like science fiction and can seem impossible - the scale of it seems unreachable,” says Fisher.

“But we already have the technology to do this, and some of the new scanners that are coming online are fully capable of getting us to this goal.”

Aside from creating a visual record, the Earth Archive could use the highly-accurate lidar scans for research, for example calculating carbon biomass in forests, or to quantify the amount of carbon lost by deforestation efforts, or provide better information for wildfire prevention efforts.

In a case study in the Muir Woods in California, the high-resolution lidar scans were even able to be used to count the number of individual trees, helping researchers to update estimates of the forest’s biomass and carbon stores.

Dr. Fisher’s entire keynote presentation from Geo Week can be watched below, and more information can be found at the Earth Archive website.