Paracosm may be known for a tablet-based scanner, but its new PX-80 system is a professional solution through and through.

The handheld lidar scanner is built around Velodyne’s VLP-16 Puck. It includes two fish-eye cameras, an IMU, and a screen for visual feedback. The system scans at a range of 100 meters, gathers 300,000 points per second, and boasts accuracy of 2 cm both indoors and out.

But it’s more than that: Paracosm told me the PX-80 is built to help construction teams gain access to powerful analytics that help them to understand a work site in new ways. 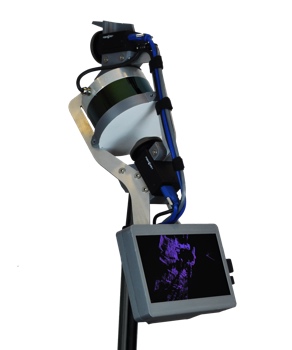 According to business developer Gannon Wilder, the PX-80 does this by taking the trouble out of working with point clouds.

First, he says, the scanner speeds up the workflow by offering scan processing on the device itself instead of the cloud. Paracosm’s SLAM algorithm enables the scanner to register point clouds with color, and without significant wait-time for processing.

As you scan, says Wilder, “you’ll see the playback so you have an idea of what you’re capturing as you walk through the site.” The PX-80’s automatic registration and quick visual feedback should enable teams to make accurate captures of a construction site in a matter of minutes—or as long as it takes a single user to walk through. In the video above, the capture takes about five minutes, and the processing less than 20. Paracosm told me to think of the PX-80 as augmenting the tripod-based laser scanner, which will still be “king of the hill” for accuracy and density.

But the point cloud isn’t the end of the line for Paracosm. Wilder says the company is working on software that will automatically align point clouds to the original design model. “Once you align the first one,” says Wilder, “you scan and throw more data in, and it will sync up in the right place.”

When a construction team scans weekly and plugs their scans into Paracosm’s system, this will enable easy comparisons. “First up,” says Wilder, “we’re supplying people with scan data in an archival format so they can see the difference between different days, identify where the work has been done, and find where to focus their efforts.”

With Paracosm’s software, construction teams can easily double-check areas with a lot of changes, identify areas where an object is out of tolerance, or see where work was completed incorrectly.

But these progress comparison tools are just the first taste of Paracosm’s bigger play.

CEO Amir Rubin told me that the company’s real goal is to make it easier for teams to capture more scans, so they can use those scans to power deep analytics. “Once you have progression scans of a site,” he asks, “can you now automatically measure progress? Can you find ways to automatically feed this through quality control engines, and clash detection engines, and generate reports? Can you do analysis of which of your subcontractors is doing a good job?”

When construction teams are scanning often enough to feed analytics software, Rubin says, “there are so many advances in data analysis and machine learning that can be applied for the first time. That’s where I think the real value is.”

Paracosm has not announced pricing information or a release date for the PX-80.