The past few years have blurred the lines between consumer and professional 3D scanning, with a number of companies gunning for the other side of the aisle. Add another to your list: Occipital has acquired Paracosm for an undisclosed amount.

As part of the acquisition, the Paracosm team has joined Occipital, taking all Paracosm IP with them. Oh, and the release date for Paracosm’s PX-80 has also been moved up significantly—to October 30th.

Small and large area, under one roof

After making a name in the 3D space with the Structure 3D sensor for smartphones in 2014, Occipital has released a number of intriguing mobile-based 3D technologies in short order. That list includes a $399 mixed-reality headset for iPhone, a low-cost AR/VR platform for iPhone, the Canvas 3D modeling iOS app, and a scan-to-CAD service.

For a company focusing on prosumer, small-area 3D mapping, Paracosm a good get. Though Paracosm also started out working with mobile technology (like the Structure sensor), they have recently pivoted to lidar technologies and, along with the tech change, they have pivoted to mapping larger areas. The new PX-80 handheld lidar system, for instance, is aimed at AEC customers who want to perform site capture.

As Occipital says in an official statement on the front page of its website, this acquisition means the company can now offer 3D mapping solutions for every kind of hardware, “from a single-camera smartphone to sophisticated LiDAR-based systems like PX-80.” 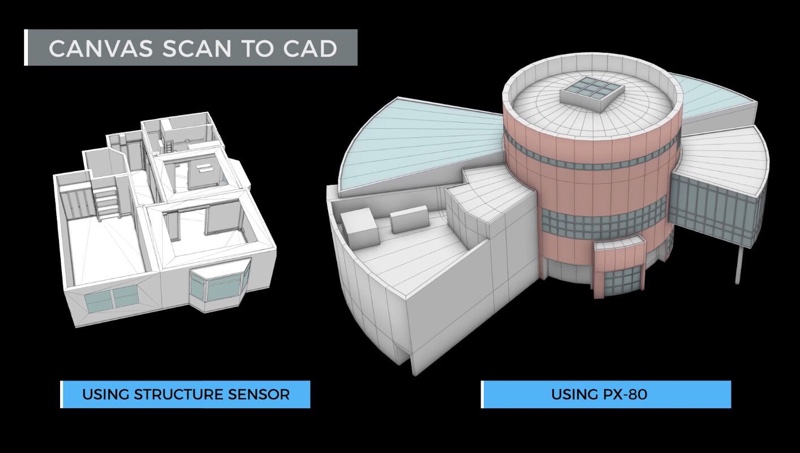 The two companies say they will pursue “joint and independent” projects to bring spatial computing to a wider audience. When I asked Paracosm president Amir Rubin what that means, he said: “We mean that we’re going to be continually looking for ways to unify tech between the lidar system and Occipital’s other tech and product areas,” he said. “One example is that we can already our Scan-to-CAD conversion service with the PX-80, and a lot more is happening under the hood.”

Though Occipital already has mature SLAM tech (which is used across their product range), VP of marketing Adam Rodnitzky explained to me that Paracosm’s SLAM tech will also play an important part in future developments. “We’re absolutely going to be looking for ways to leverage any advantages of that tech,” he said.

When asked if Paracosm will retain a degree of independence after the acquisition, Paracosm’s Rubin clarified that “we’re all one combined company now, and Paracosm will operate as our division focusing on lidar mapping solutions for large-scale areas and heavy industry.”

“Often these customers’ needs are aligned with Occipital’s consumer slash prosumer products, but not always,” he continued. “So Paracosm has a high degree of autonomy to continue serving these markets. That said, our teams are meshing well, and technology enhancements are flying in all directions!”