In nearly every construction project, contractors are obligated to visually document their worksites to track progress and to create a record of what has been built. Traditionally, this involves hiring a person or company to come in to perform the documentation. The data may only be collected once or a handful of times, and the captures can be infrequent and expensive.

With the growth in availability of 3D scanning for this type of documentation, it is possible to have a more complete record than photographs- but it can still require a significant amount of time and expertise to capture. The necessity of needing a professional come in with expensive equipment to do it still means that there may be long gaps in between captures, however.

Construction technology startup OpenSpace has developed a way to streamline this process by creating a workflow that can perform worksite documentation almost continuously by leveraging workers that are already traveling worksites for their regular tasks. OpenSpace believes that it is the fastest scanning tool out there, which is due not only to the lack of time and labor required to perform the scans,  but in utilizing AI to speed up its processing algorithms once a worksite has been scanned. 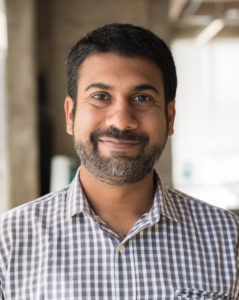 Before starting OpenSpace, CEO and co-founder Jeevan Kalanithi saw companies starting to use laser scanners to capture as-built scenes, but recognized that there was still a gap when it came to construction documentation.

“With laser scanners, it requires a lot of very manual processing, requires an expert and a lot of time. Getting the information back takes days or even longer.”

By equipping construction personnel with 360 cameras that link to OpenSpace’s application, workers can now show up to a worksite and start capturing while still performing their primary jobs. Instead of clearing out the workspace to take one capture at key intervals, this opens the potential for scans to be completed much more frequency, without added effort or interruptions. Kalanithi says removing the “labor” of scanning has a large impact on both time and cost.

“We made the capture process not just faster but almost infinitely faster through a zero-labor process. [Workers] can just walk the job in a way they normally do, and it just clicks away as they’re doing their regular site walks.”

One compelling new feature is the addition of AI to make the process even faster. OpenSpace is using AI to increase scan processing speeds even further, with an embedded ability to ‘learn’ the site. Essentially, says Kalanithi, the software doesn’t have to start from scratch every time a new scan is captured – it builds upon what it has “learned” from previous scans of the same site.

“Once you walk the site, we have some information about what the site looks like, then it allows subsequent walks to be much faster because the algorithm can work much more quickly.” 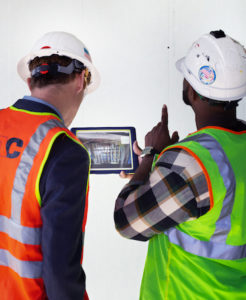 So how would this process work on the jobsite? Any worker could have a 360 camera mounted to their hard hat, either physically or magnetically mounted. OpenSpace’s program has a mobile application where you tell it what project you are working, and then you hit “Start” to begin the capture. The professionals can then focus on their own jobs, not the scan.

“You can walk around as long as you want, and that’s the experience right there. You don’t have to stop every 10 minutes, you can just walk around,” says Kalanithi.

After the capture is complete, you then upload the data to OpenSpace’s cloud, where it is processed. The data can be processed in a matter of minutes, not hours, depending on the size of the scan and the frequency of previous scans.

“The upshot is that the more you use it the faster it gets.”

Once that process is complete the scans can be viewed at a custom URL (e.g., openspace.ai/your_url_here), facilitating sharing among the construction and management teams. From that webspace, users can look around, click through a floorplan to “warp” to where they want to go or take a virtual walkthrough.

There is also a powerful calendar widget that allows you to go back in time to see previous scans – which can help to pinpoint any problems as they occur. Customers can then also curate their own data to share certain captures and share that information with specific users. All of these features seem seamless and intuitive, despite the powerful back end. This was intentional, and part of OpenSpace’s philosophy, says Kalanithi.

“We build advanced technology so that we can produce simple solutions for our customers. They don’t want to need a PhD to use them, they really just want them to be easy and fast.”

After recently receiving a $14M Series A funding round, OpenSpace has now captured more than 150 million square feet of data, equivalent to 50 Empire State Buildings. Their “Fitbit simple” capture system has been updated to be even faster, and the company plans to continue scaling its operations and developing new products, says Kalanithi.

“We are very confident our system is fast – and we’re going to continue to invest in that.”

More information about OpenSpace is available on OpenSpace.ai