Reality IMT, a provider of 360° visual technology services, has announced a solution that enables users to extract 3D models and point clouds from video captured with spherical 360° cameras. The company is marketing the device toward facilities managers, who often have very large structures to maintain.

Users can walk through an environment with a 360° video camera—or fly an environment with a video camera attached to a drone—and generate a range of deliverables. With a single pass, users can generate 3D models and point clouds, which can then be exported for use in 3D CAD software for applications including as-built documentation, clash-detection, retrofitting, remodeling, and more general documentation purposes.

In addition, users will have access to the 3D video itself, which is useful for communication, training, and documentation purposes. These videos can be used to generate virtual reality visualizations for presentation and teaching purposes.

All of these deliverables can be extracted from one field session with a single sensor, reducing equipment costs and minimizing time spent on site.

Reality IMT was present at SPAR 3D Expo and Conference 2016, where they performed a 13-second walkthrough of the Woodlands Mariott lobby with a 360° camera and generated a point cloud from the results. 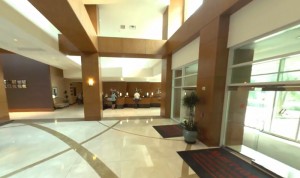 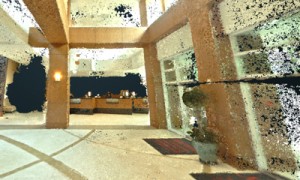 “I am thrilled to inform you that we have made a breakthrough in the imaging and mapping technology,” said Reality IMT founder Ala’ Hamdan in an official statement. “We are now able to extract 3D models from a panoramic video to produce dense point cloud data that normally requires expensive laser scanners to produce. During our research and development effort, we tested different imaging techniques combining the science of photogrammetry, 360° imaging, and point cloud viewing software to be able to produce these 3D models.”