After three years of research and development, and a few unexpected unpivots, the Zurich-based 3D tech company Nomoko is ready for prime time.

Nomoko might seem hard to place in the existing 3D market, at least initially. Though it makes a 1000MP digital camera, as well as a data pipeline tuned to process those high-res photos into 3D models at great speeds, head of Nomoko’s ProductLab Bara Caldova says these technologies are not for sale. Instead, they are a means to an end, the necessary tools for generating Nomoko’s real product: a high-accuracy digital twin of the real world and a platform for using that data in whatever way you need.

The idea behind Nomoko’s platform is twofold. First, it will offer customers access to highly accurate, cost-effective 3D models of the real world without the burden of capturing or processing it themselves. Second, it will provide them with an array tools necessary to build analytics, simulations, and full-featured applications on top of that data.

Getting 3D data to people who need it

In the future, the platform will work like this: You log into the platform and select the digital twin of your choice. Caldova offers the example of SPAR3D’s home city: “What we imagine is, whatever industry you’re in, you might log in and say, ‘Portland is super interesting to me as an area.’ So you select that area with the different specifications you need, like the level of detail, and segmentation, and other presets like that, and then you get a digital twin you can use to build whatever you need to build.”

Nomoko’s current list of clients demonstrates its dedication to making 3D data available across industry lines, and even into industries that haven’t historically had access to the 3D they need. “Let’s say you’re a car company and you want to build a simulator. We integrate the platform with Unity, so you can use our data to build it. Or if you want to build a computer game at a city scale, you can build that. We tried to go this holistic way, to make photo-realistic data available to as many people as possible to build whatever they want on top of it.” 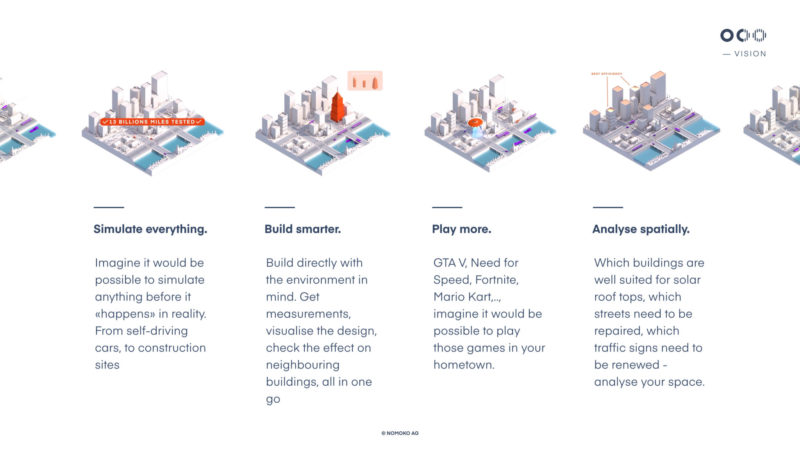 How Nomoko’s data differs, and why that difference matters

Even in 2018, when the number companies offering 3D capture is hitting the stratosphere, there remain a number of industries that still don’t have the access to the high-accuracy 3D data that they need. “There are a lot of solutions that cater to small area or indoor mapping,” Caldova says. “But there aren’t so many solutions that are very large scale and cost efficient.”

To capture this cost-efficient data at scale, Nomoko mounts their proprietary 1000MP camera to a drone or other aircraft to fly an area at an altitude of around 150 meters. “From this height,” Caldova continues, “we still capture centimeter accuracy on the ground, and this allows us to capture large areas very fast.”

As for just how quickly they capture, Caldova says Nomoko foresees “the ability to capture a city the size of Zurich (87 sq km) with 10 flying systems in roughly a day plus processing time, which is obviously highly dependent on resources.”

This is an impressive speed for a system that can generate not only photogrammetric meshes, but also point clouds with a density of up to 30,000 points per square meter. “This is the whole point,” Caldova says. “We build an advantage in the ability to capture the data fast, process the data fast, and have high accuracy without requiring much post-processing, because that’s the biggest pain in 3D. There is, of course, a lot of 3D data out there, but the moment you have data with this accuracy at this scale you can enable a lot of new applications—everything from urban planning to total city-scale games.”

A few of Nomoko’s early discussions with a potential customer proves this point beautifully. “We got a company in that said, ‘Oh, if we were able to integrate weather information into a 3D model, or a mathematical model of airflow, we would be able to understand airflow dynamics in case we build another skyscraper,” Caldova says.

“We see these ideas coming from all sorts of industries,” Caldova added. “People have these ideas, but at the end of the day they didn’t have the 3D data to make them happen.”

Path toward a digital twin of the whole world

At only three years old, Nomoko is still a relatively new company. That’s why, for the near future it will stick to capturing data as customers request it, and at the scale they need, rather than building a pre-existing data set that customers can draw from.

“We are starting with on-demand capture because we know it’s important to get customer feedback,” Caldova says. The company will use these early customer projects as a way to understand and overcome the challenges that will come with scaling up to capture wider swaths of the world in 3D. Challenges like dealing with legislation in different geographical areas, determining how often to capture high-growth cities, how often to capture areas that don’t change very often, and whether to outsource some of that capture or accept third-party data.

This deliberate method of up-scaling will also allow Nomoko to develop the platform internally, quickly add the kinds of features that users request more often and fill out the functionality of the platform. It will also give Nomoko the opportunity to educate their users—many of whom are relatively unfamiliar with 3D spatial data—about how to integrate the high-accuracy digital twins into their workflows.

Everything comes back to data

Caldova explained that Nomoko’s long-term goal is to be something like the Amazon Web Services of real-world 3D data: a service that runs in the background, providing the necessary spatial 3D data to a wide variety of developers and companies, from market-dominating forces like Esri, to small firm without the resources to generate their own 3D data.

“Ideally,” Caldova said, “we want to offer a digital copy of the world so people can build whatever they want to build. And everyone should be able to build whatever they need for their customer or their business. It always comes back to the fact that you need to have our world in digital. We are deeply convinced that the future is spatial and that an increasing amount of digital solutions will need to be rooted in reality.”