Exelon, co-developer, is using it now in its nuclear plants

SEATTLE—Newton Labs, a technology developer here with roots in the robotics and machine-vision industries, has released its first 3D laser scanner—and it works underwater.

The NM200UW Nuclear Underwater Laser Scanner is spec’d to within .7 mm accuracy within a roughly 20’ cubic box (see spec sheet here) and is currently being used by Exelon, the largest nuclear power operator in the United States with 17 plants, to measure parts in its boiling-water and pressurized-water reactors.

In fact, Exelon helped develop the device, and it represents the realization of a goal that goes back well over a decade for Keith Moser, innovation manager at Exelon.

Inevitably, parts wear down, even in nuclear reactors. “We would find a problem during the refueling,” Moser says, “and then if we decided we needed to repair or replace, we had to get measurements. While they do have as-built dimensions for the plants, they aren’t good enough to get the fine tolerances that are needed for designing tools you’re going to need for working 40 feet underwater, or the fine tolerances needed for the pieces of repair hardware.”

So, what did Moser do to get the measurements?

“We stood on a bridge, put a T-square on a pole, and dropped it down to the component with a camera and a light, trying to read dimensions to a few thousandths tolerance,” he says. 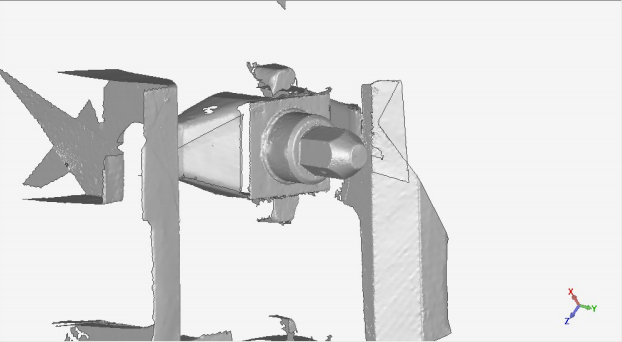 This is a beam bolt point cloud created by the NM200U.

Not surprisingly, considering the tools available, the results didn’t always turn out as planned. “Since 1997, I’ve tallied what we did. It’s about a .600 batting average. Six times they fit. Four times they didn’t fit,” Moser says. “So, we’d have to take the tools out, take the hardware out, do the modifications on critical paths, and put the hardware [we were trying to replace]back in place. That took an incredible amount of time.”

He estimates each failure meant a loss of roughly $10 million.

“So,” he says, “it has been my passion to find a better solution.” He called around to NASA, Sandia National Labs, sonar people, vendors of all kinds.

“Newton was the first one that said, ‘We think we can tackle this.’”

Laser scanning underwater? “It’s not impossible,” laughs John Bramblet, president of Newton Labs. “It’s just expensive. The development of the software calibration is very time consuming, and thus costly.” But Exelon and Newton each threw some money in the pot and “the prototype worked a lot better than I thought it would,” says Moser.

To adjust for all the diffraction of the lasers that the water caused took some time, says Bramblet. “There are literally millions of calculations that have to be done to calibrate this underwater; one of the significant aspects was speeding it up. It used to take 15 minutes to process a scan, now it’s down to 15 seconds. And that was a major cost to speed that up.” 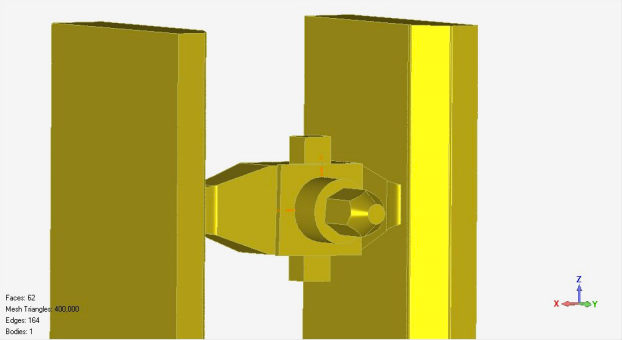 This is the model, created in Geomagic’s software, created from the above point cloud.

Moser thinks, “this is just the start for underwater mapping. We’re doing it in one of the most difficult environments you can.” While the water is clear, which is important, the cores of the reactors also throw off thermal waves through the water that were very difficult to account for. Also, he says, “you have to have a very stable camera position, or that creates some problems.”

Currently, Exelon is using Geomagic’s software to process and work with the point clouds that the scanner generates. “The first software program that I had was not nearly as good as the Geomagic that we’ve migrated to,” Moser says. “The point clouds that we developed were always fine, but the integration with some kind of 3D software like Geomagic has not always been there. You start migrating to things that give you the most help.” 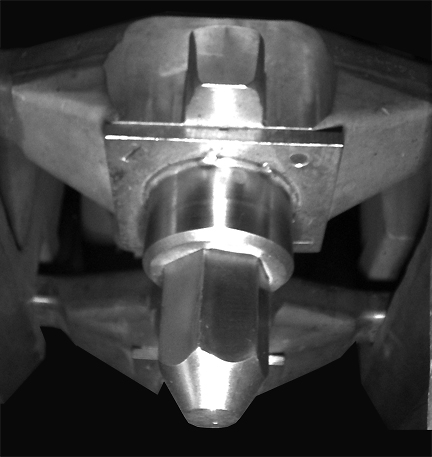 And here is the actual bolt.

Bramblet notes that you should be able to use most of the point cloud engines out there on the market today, however. “After messing with a bunch of the software, we decided Geomagic was the best one for this market,” he says. “So we market it with our product. But once you have the point cloud you can measure with in any of the 3D software tools on the market.”

As you might imagine, this capability is causing a stir in the nuclear community. “The tolerances that we’re getting are just phenomenal,” Moser says. He has found accuracy to .0005” where, previously, “if we got within an eighth of an inch, we were pretty happy. Sometimes, a quarter inch was taxing our abilities.” He notes that two other nuclear firms are already deploying the scanner, and “we have people coming to our station this spring to see how well we do with our core mapping underwater.”

As-designed vs. as-built vs. as-is