Trimble Navigation on Tuesday introduced a time-of-flight-based, 3D laser scanner that scans one million points per second at sub-two-millimeter accuracy to 120 meters for applications in plant and process, engineering, surveying, architecture, construction and forensics.

Sunnyvale, Calif.-based Trimble credits its patented Lightning technology for maintaining precision over the scanner’s 120-meter range by accurately measuring the time, at the nanosecond level, for a pulse of light to be transmitted to and reflected from an object back to the scanner.

The company said the ultra-high speed TX8, making its debut at the Intergeo conference in Essen, Germany, has a 360 x 317 degree field-of-view with a typical scan time of three minutes to quickly produce high-density 3D point clouds.

The TX8 makes its debut a year after Leica Geosystems introduced its ScanStation P20 ultra-high speed, time-of-flight scanner at Intergeo last year. The Class-1 P20 raised the bar for industry hardware by using waveform digitization technology to capture one million points with low noise at an extended range of 120 meters.

The TX8 looks somewhat similar to the P20. Both use a vertically rotating mirror on a horizontally rotating base and both claim to collect a million points per second with no lighting conditions.

“Spec for spec, from that standpoint, you might draw that conclusion,” Trimble’s Todd Steiner, portfolio manager – survey optics, told SPAR from Intergeo Wednesday.

However, there is one significant difference between the two laser scanners: the TX8 features the option to upgrade the measurement range to 340 meters. Steiner said the data collection rate and accuracy measurement for the extended range is not spec’d out yet.

Still, Steiner explained Trimble wasn’t necessarily looking to break the mold on ultra-high speed, time-of-flight laser scanners with the debut of the TX8. He said the scanner’s real value for customers, including the extended range option, is its wide variety of applications for civil engineering, surveying and forensics.

“It’s not really a new play for us, it’s just a new solution to address the markets’ needs,” Steiner said. “The good thing about Trimble, we have a wide-reaching distribution channel that is very adept at [understanding]the applications the TX8 is well-suited for,” Steiner said.

The TX8 is aimed at the following applications, in particular:

Trimble said the TX8 and the optional range upgrade should be available in the fourth quarter through its Geospatial Division distribution network.

The V10 uses calibrated imaging sensors to capture digital images directly from the range pole. Twelve calibrated cameras – seven panoramic and five downward-looking – integrated in the V10 provide complete site visualization and documentation with a 60-megapixel panoramic image that can be used to make photogrammetric measurements. 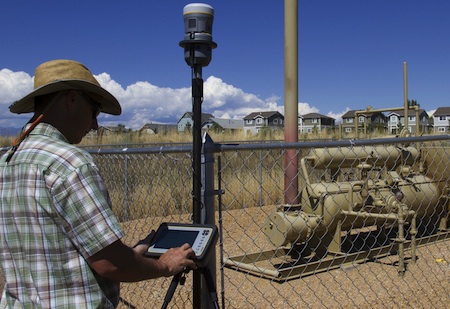 The V10 should be available in the first quarter of 2014.

RIEGL's New Wide-Area Airborne LiDAR is a Big Step Up