Neptec enters with roots in space program and defense

OTTAWA – After more than two decades developing 3D imaging technology for the likes of NASA and various defense-related customers, Neptec Design Group has spun off a commercial arm, Neptec Technologies, that is bringing to market a new laser scanner and point cloud processing software that moves the ball forward in terms of automatic object recognition.

“Terrestrial markets are much different from the space marketplace,” Neptec Technologies COO Mike Sekerka said in an interview with SPAR. “It’s all about ROI, while space is about solving a problem and making it as good as possible, sort of regardless of cost. The mindset and team that you need to deliver the two is different, so we spun a company off and put in place a new team focused on manufacturing, supply chain development, and with a product-centric mindset. We have a mandate to solve real customer problems.”

(For Neptec’s efforts in space, read about their technology scanning the Shuttle Discovery, or its TRiDAR, or search “Neptec” at SPARPointGroup.com.)

The first products they’ll bring to market, with a formal launch coming after the first of the year, leverage Neptec’s OPAL technology, which stands for “Obscurant Penetrating Auto-synchronous Lidar.” Essentially, they’ve developed lidar that can see through dust and other particulates to identify objects. In real time. 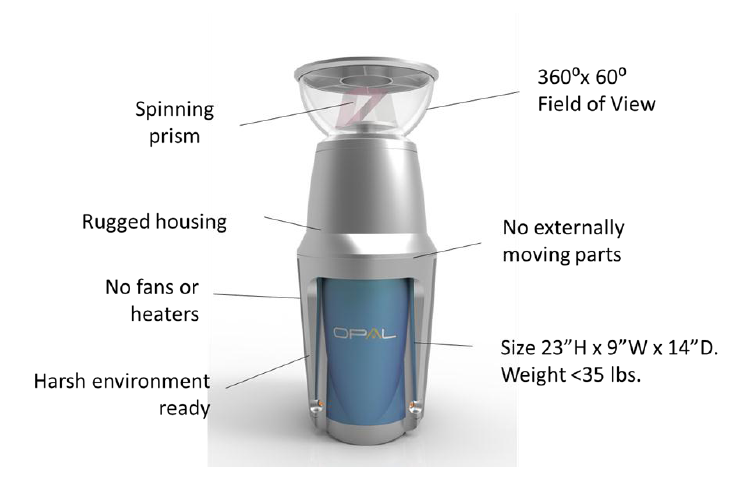 Neptec was awarded a patent for the technology in November, Sekerka said, and it has been tested, for example, on helicopters, where the pilot may be landing in a sandy area and the rotor blades are kicking up a dust cloud that creates almost zero visibility. Has a vehicle rushed into the space? Are there large rocks that should be avoided? OPAL technology can answer those questions and help pilots avoid accidents.

“It’s a combination of a special time-of-flight laser scanner that has a clear mode, and also an obscurant mode, and some special software that switches between those modes,” explained Philip Church, VP of sensors at Neptec Technologies, and who came over from Neptec Design, “as well as looking at the returns that we receive and what is an obscurant return and what’s the real target … it’s essentially waveform technology, but instead of solving for the multiple returns in the post processing, you’re doing it in real time.”

The first actual products are the OPAL-360 laser scanner and the 3DRi Software Development Toolkit, and they are targeted at the autonomous vehicle and machine vision marketplace. By providing automatic scan alignment without reference markers, automatic change detection, automatic object recognition and tracking, and automatic image analysis for measurement taking, Neptec believes it can provide data that could make robots, autonomous vehicles, and smart machines much more useful and efficient.

However, “It’s also a very powerful survey sensor,” Sekerka said, and he described it as “priced economically.” It’s designed for harsh environments, so it has an operating temperature of -40 to 65C; it’s ruggedized and resistant to vibration, with no fans or heaters and an IP 67 rating; and it scans in 360 degrees at roughly 200,000 points per second at 200m and 25,000 points per second out as far as 1.2 km.

Perhaps most interestingly, the scanner gathers data in a scan pattern that first gathers sparse data in all areas and then fills in the gaps, so that you can continuously scan at low resolution, but then ramp up to higher resolution should something of interest be detected.

“Within one second you have a enough data to start determining objects,” said Sekerka.

As for accuracy, “it’s on the order of a centimeter,” Church said.

While Neptec will initially focus on autonomous vehicles and machine vision, the company is also looking to license the hardware and software so that other firms can design for other applications, whether offshore – where a ruggedized, economically priced scanner might be attractive – or for mobile mapping, or otherwise.

“Think of emergency response,” said Sekerka. “Our lidar sees through smoke. That’s what the lidar is designed for; it’s designed for where other lidars can’t go, but it’s a good basic lidar as well. We’re going to look at things that are going to be done in real time and remove the onus on the client or the integrator to deal with a lot of point cloud data, but rather give them the ability to extract features in real time.”

“People are intrigued,” he continued, “and very quickly we get a list of problems they’d like us to solve when we show them this technology. And they’re high-value problems … But there are a lot of problems and we’re not going to be addressing all of them out of the gate, so someone else might be interested in attacking that problem.”