NavVis has announced the release of its latest indoor mobile mapping system, the M6. This fully integrated cart-based system includes four laser scanners with range of up to 100 meters, six cameras for capturing 360° imagery, and sensors for tracking Bluetooth beacons, WiFi signals, and magnetic field data.

The M6 was designed to operate in a wider range of scenarios and produce higher quality data than previous models. It’s also specified for high-speed capture at up to 30,000 square meters a day, making the M6 deployable in truly large-scale indoor mapping projects for BIM generation, factor planning, and construction monitoring.

When I caught up with Dr. Georg Schroth, co-founder of NavVis, he explained the secret sauce that makes all this possible: 6D SLAM technology.

After the release of the popular M3, Schroth says, NavVis’ customers began asking for a system that could operate in a wider range of environments, like over rough terrain, ramps, and in open or narrow spaces. The customers also wanted higher quality data, so that the trolley scanner could take on more of the work they traditionally performed with static laser scanners.

NavVis answered by focusing its R&D efforts on 6D SLAM (a natural next step, since SLAM has been a major focus of the company’s work for a long time). Where classic SLAM approaches assume the presence of a flat floor—and captures poorer data in places where the floor is not flat—6D SLAM makes no assumptions about the floor. It determines the position and orientation of the system in all 6 degrees of freedom (X, Y, Z, and yaw, pitch, roll), and promises faster capture, as well as significantly better data as a result. 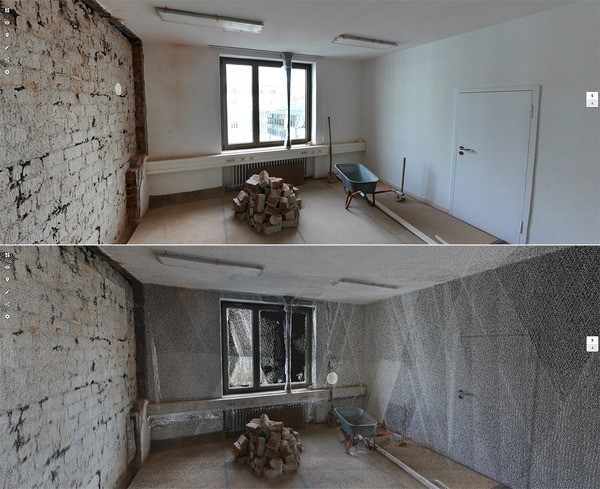 There’s no such thing as a free lunch, Schroth tells me. “While this allows you to move the system in any direction and orientation, it is also more complex to determine the pose precisely and reliably.” It took NavVis over two years of development to get the results their customers demanded.

The result is the SLAM algorithms you’ll find in the M6, which maintains accuracy while “being rolled up rams, over rough terrain like cobblestone and construction rubble, or being lifted over an object.” Use the M6 in virtually any complex environment, Schroth says, “it will always precisely track its position.”

The M6 should be particularly interesting to AEC users, at is has been carefully considered to make the most of this updated SLAM technology for BIM applications. “The M6 can be used in open spaces and create a very comprehensive point cloud with few occlusions,” Schroth says. Together with the 360° imagery, that means the M6 offers all necessary data for BIM modeling that requires capture of “every single detail.”

Schroth argues that it’s not just AEC users who can benefit from the M6, but anyone who needs to capture large indoor areas with high accuracy. “I am confident,” he says, “that the result clearly stands out from existing SLAM solutions you see today.”