Knowing how important this tool is for users, a more accurate and user-friendly tool was developed: the point clouds uploaded to NavVis IndoorViewer and converted in realistic digital buildings now include the measurement tool as a standard feature. A ruler icon in the menu bar lets users get started and take measurements that can be saved to individual accounts and revisited at any time. The interface was designed to be intuitive so anybody can use it to take in-browser measurements. The magnifying icon can be used to pick the exact point cloud point while in the realistic 3D view, only the point cloud points of a small area are shown while the surroundings remain displayed as the realistic view.

The latest version of NavVis IndoorViewer (v2.6) has been redesigned to overcome two of the biggest problems with virtual measurement tools: accuracy and usability. While point cloud measurements are quite accurate, the software tools used to take point cloud measurements are often not accessible or even usable for a wide range of building stakeholders who lack the expertise in working with point clouds. Also, users who do work with point clouds find it painful to find the right point to measure. More user-friendly tools that use images or even meshes are usually not reliable enough to produce accurate results, because it is impossible to know if the image matches up with the point cloud point. 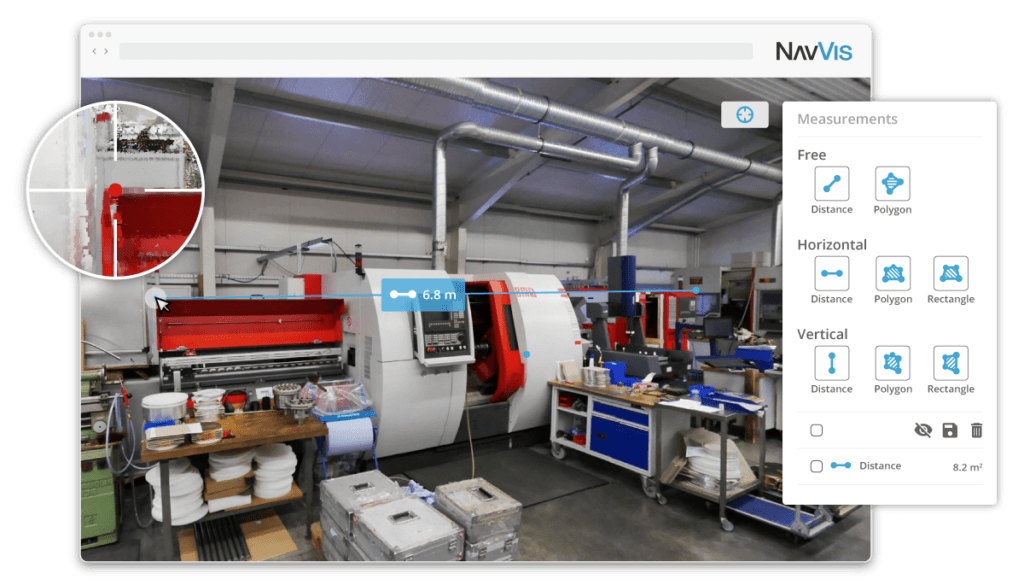 To overcome both of these challenges, the measurement tool in NavVis IndoorViewer now includes a magnifying feature in the realistic 360° view that provides a behind-the-scenes look at the point cloud. This lets users pick the exact point cloud point while benefiting from the intuitive interface of the fully immersive walkthrough. Measurements can also be taken in the HD colored floorplans that appear in the 2D map view. These detailed floorplans are both easy to interpret and highly accurate because they have been generated using point clouds.

In addition to making strides in the accuracy of remote measurements, the interface of the tool has also been fully redesigned. In addition to the new magnifying feature that makes it possible to view sections of the point cloud in the realistic panorama mode, NavVis has introduced a slider function that lets the user toggle between 2D and 3D mode, taking measurements side-by-side. So on the one hand, this function provides an overview of the entire building, which makes it easier to locate the asset or area that is to be measured. And at the same time, the location selected on the floorplan appears in the realistic 360° view, making it possible to virtually walk through the area being measured or inspect the asset, similar to how a measurement would be taken on site. 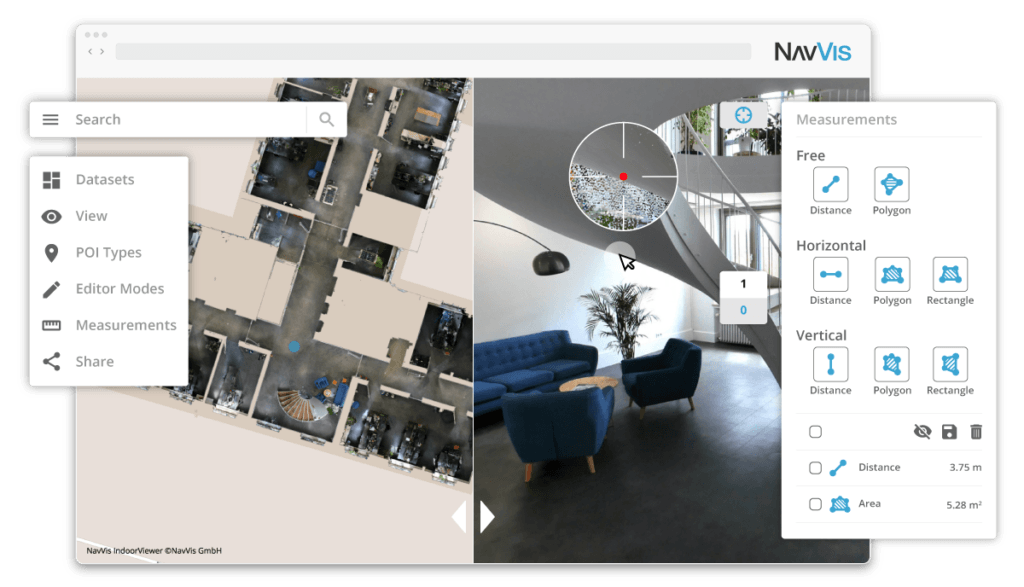 To overcome this, NavVis developed algorithms that automatically extract any available images and reconstruct missing ones using colored points clouds. Although all e57 point cloud files can be uploaded to NavVis IndoorViewer, this feature is only available for those files post-processed as structured e57 files, which is only possible with static scanners. E57 is the most common type of point cloud file, so NavVis generally aims to support this file type when releasing new point cloud features. The company initially released the point cloud download feature in NavVis IndoorViewer 2.5 for e57 files, but in the latest release, the options of saving downloaded point cloud files to .las and .ply have been extended.