Matterport, a leading 3D capture technology and data company has partnered with EMC Insurance Companies to implement 3D capture on commercial properties for loss control and claims. For the insurance industry, adopting 3D capture has positive impacts from carrier to customer (and everyone in between).

When ‘Good Enough’ Starts Costing Too Much

When a catastrophic loss of property occurs, insurers send field technicians on a site inspection to document the damage. Traditionally, this involves taking photographs of the damaged structure and gathering measurements either with tape measures or laser devices. Depending on the size and scope of the loss and the property, this can be time-intensive. The results then also need to be manually translated into an as accurate as possible cost estimate of the damages, which is used to determine materials, scope and timelines for restoration processes. 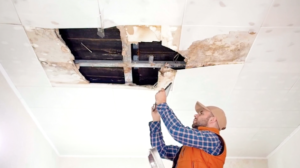 Using only photographs and manual measurements to assess damage can be costly.

For thousands of claims, these two steps could require hundreds of thousands of hours of field work.  And much of this work was being done by highly skilled (and thus highly compensated) estimators, whose time would be better suited to working on true estimation and adjustment work.

In the field, manual work can be impacted by inevitable human error.  The scope of restoration work may be affected if assumptions are made – e.g., in estimating the amount of material that needs to be removed or the extent of damage from something like a flood. Re-assessing those original estimates is costly and inefficient, and also could delay claims when there are changes that have to be made from inaccurate measurements. All of these factors ultimately affect customer satisfaction.

For Matterport, it became obvious that there were places in that workflow where portable, easy-to-use cameras that produce detailed 3D models could drastically improve the accuracy of estimates. Matterport fits in this role by providing an affordable, easy-to-deploy camera and cloud-based software platform with accuracy that is perfect for these types of property assessments.

Why is Matterport’s solution such a good fit for the insurance industry? One place to look is in the accuracy needs of insurers and adjusters.

Historically, the insurance industry was slow to adopt interior 3D technology as a claims tool, mostly because the cameras that were available were overkill for their needs, and the costs were prohibitive when the cameras had capabilities that they didn’t need to leverage. An insurer doesn’t need accuracy to the millimeter in measurements nearly as much as they wanted a way to get better models more quickly, and with reduced human error.

EMC first used Matterport scans of properties when they were examining properties affected by natural disasters to document losses and damages. With the new partnership, Matterport’s tech will be adopted across EMC’s other disciplines – which include claims, loss control, and innovation. For Matterport’s Director of Business Development Tomer Poran, this relationship has some very clear positive outcomes for the insurance industry.

“When a Matterport scan is done for a loss, adjusters have noticed that they spend a lot less time on the back and forth between the contractor and building consultants because they have a much more transparent view of the site,” says Poran.

A complete 3D view of a fire-damaged home (Matterport).

A Win for Contractor and Customer

Utilizing 3D scans in the claims process will ultimately reduce the time to settle a claim, which in turn, speeds up the restoration work the property. Using Matterport can allow estimators to spend more of their time on the more skilled portions of their job, instead of dealing with tape measures and pen-and-paper sketches.

“They’re freed up to do the high value work,” Poran added.

It also allows insurance professionals, administrators and adjusters – who are ultimately in charge of settling claims – to be able to quickly triage claims. The scans could be used to send the claims to the right adjuster with the right urgency and match the adjusters to the right type of claim. In some cases, the scans could even allow for “virtual adjusting,” which eliminates the need for the adjuster to travel to a property.

There’s a win-win for customers when insurers adopt scanning as part of their claims process. Customers who are going through the process are not only able to return to their homes faster after a loss, but also that they have more confidence that they are being fairly compensated, and that the extent of the loss has been properly and meticulously documented. This leads to higher satisfaction with the carrier.

“With dozens of insurers ramping up their use of Matterport, partnering with EMC to help them deploy Matterport on commercial claims is a big step for us with this important segment, which remains a key area of growth for us,” said Poran.

Beyond adopting Matterport for claims there is an opportunity for more segments of the insurance and property industries to benefit from scanning their assets. Underwriters could perform more accurate and comprehensive inspections with Matterport, and risk engineers, lenders and underwriters could also get a fuller view of a property before projects are even conceptualized. Gary Friess, Property Review Manager at EMC Insurance Companies, said they are looking forward to implementing Matterport’s technology across various applications.

“Matterport’s technology is a highly practical application in the insurance industry, and we are proud to be among the leaders adopting it in multiple capacities,” said Gary Friess, Property Review Manager at EMC Insurance Companies.