MOUNTAIN VIEW, Calif. – Matterport, a start-up created around using Kinect-like technology to rapidly go from scan to model, filed with the SEC this week to document nearly $4 million raised from investors thus far. Judging by the filing, they have plans to raise another $2 million or so.

Initially, the company was touting a handheld collection device, but as the company has matured and learned about the market, Matterport has settled for the time-being on a tripod-based device.

“We did a bunch of handheld demos and spoke to people in different industries and found a couple things that led to the tripod form factor,” said Florence Shaffer, VP of sales and marketing. “The main reason was speed and consistency of results.”

While it sounds easy to use the handheld device – “it’s just like spraypainting” – when users actually put it into action, Matterport found they would linger in spaces too long or go over areas unnecessarily, even with the instant feedback coming to the connected laptop. 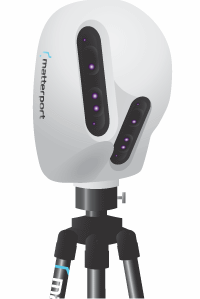 “Putting it on the tripod just make the process much easier,” she said. Also, that device you’ve seen on the Internet, maybe during coverage of CES (people were calling it “potato-like”), isn’t anything close to a final form factor.

“We made 15 of these devices really quickly for the purposes of getting feedback,” she said, “and those are not what’s going to market.” Matterport is doing testing on a variety of options right now and plan to launch full-scale production this summer.

“The biggest thing is reliability, affordability, and just usability,” Shaffer said. That latter part relies on portability, so while the version you’ve seen online might fit in a pelican case, the version that will hit the market will be small enough to fit in your standard SLR camera bag.

“So all you’ll need is a standard tripod to go with that,” Shaffer said. Plus, they plan on pricing the Matterport device similarly to a digital SLR camera as well.

Nor does that sizing include PrimeSense’s new Capris sensor, which is much smaller than the sensor in your standard Kinect. “We’re going to integrate the Capris in the future,” Shaffer said. “We didn’t have access to that when we started this new one. That will be in tripod version 3.”

As for the business plan, Matterport envisions a number of revenue streams. First, there is the sale of the device, itself, to professionals in a variety of fields (construction, real estate, forensics, insurance, entertainment and gaming) and “prosumers.” Second is licensing their viewer and software on a monthly basis to be able to manipulate and work with the data. And third is possibly providing access to the data they’ll warehouse and the consumers who might eventually use the viewer.

Say someone wants to renovate their home and creates a model using the Matterport device or a service provider who comes in and scans the home. Then they want to see what cabinets might look good in the kitchen. Perhaps a cabinet maker would pay for the ability to have their cabinets available in the suite of cabinet options you could play with. Maybe even with a direct link to buy them or contact a salesperson.

Or maybe they’ll do more collaborations like they one they’ve done with Floored, a company that, itself, just raised $1 million to provide 3D views of commercial real estate, along with the ability to experiment with renovations and the like. Floored is something of a special case, as one of the founders, Dave Eisenberg, also serves on the Matterport board, but Shaffer said it’s likely other services will be built upon the Matterport platform, though in the short term probably using Matterport’s viewer.

“We’re hitting pretty much anyone who’s doing scanning and doesn’t need that precision point” that a full laser scanner provides, Shaffer said. “Crime and forensics professionals have reached out quite a bit; insurance professionals have reached out; the construction marketplace … As a company we are interested in moving toward making 3D accessible to whomever wants it.”