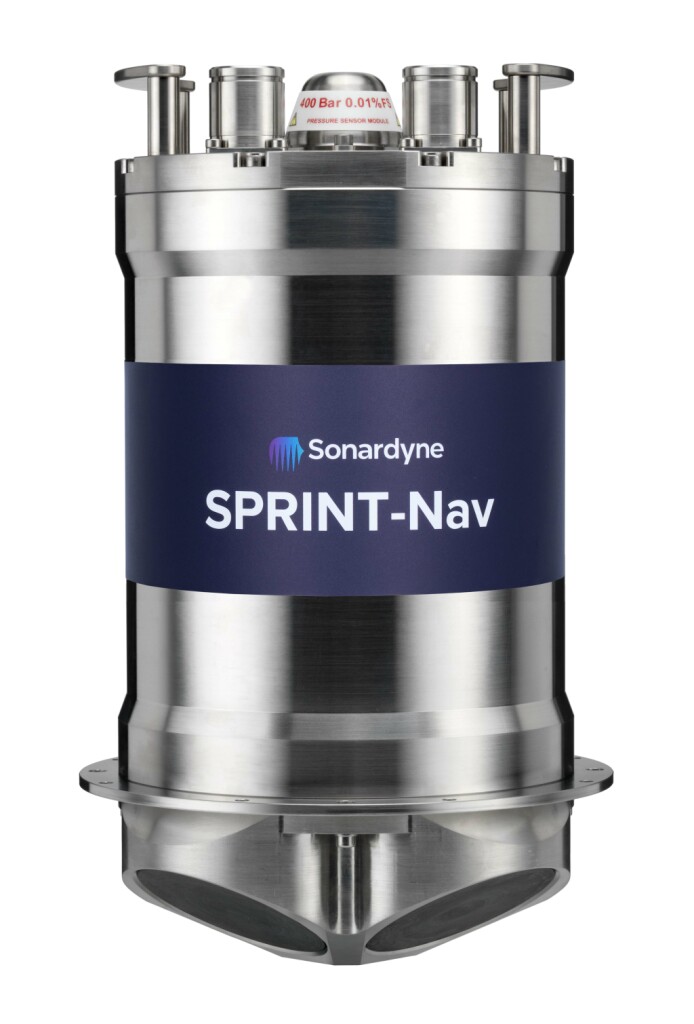 The INS includes an inertial motion unit (IMU), which uses Honeywell ring laser gyro (RLG) inertial sensors and Honeywell accelerometers to provide the vehicle with its attitude and heading. The Syrinx DVL is an acoustic sensor that measures velocity relative to the seabed. In parallel, the pressure sensor, measures depth. Together these two sensors provide external tightly integrated measurements that constrain drift in the INS. This is all in a single housing, which makes the best use of space on a vehicle, with the highest performance and without the complexity of having to integrate these multiple sensors if supplied as separates.

SPRINT-Nav is a family of instruments, ranging from the SPRINT-Nav Mini, when size, weight and cost are critical, through to SPRINT-Nav X, our highest grade SPRINT-Nav, which offers navigational accuracy of less than 0.01% of distance traveled, which takes some beating. They come in different depth ratings, down to 6,000 m, measure from just 213 mm tall to 395 mm tall.

The Endurance22 team also used Sonardyne’s AvTrak 6 tracking and telemetry transceiver, to send commands and position updates from a Ranger 2 Ultra-Short BaseLine (USBL) system, also from Sonardyne, onboard the S.A. Agulhas II. AvTrak 6 has been designed to form part of an integrated AUV tracking and navigation system. It combines the functions of transponder, transceiver and telemetry link. An AUV equipped with AvTrak 6 can receive navigation updates from any of Sonardyne’s Ultra-Short Baseline (USBL) systems, including the Ranger 2 used on this project.

These USBL systems use one of Sonardyne’s transceivers, usually deployed from a vessel, to interrogate a transponder (in this case, the transponder on the AvTrak), which then sends a reply. The transceiver uses the reply to work out the AUV’s position and then sends that information to the AvTrak, which tells the vehicle where it is. Commands can also be sent from the USBL system to the AvTrak. This could include a command to abort a mission and surface or to go to a different waypoint, with the details of that waypoint included in the message. The AvTrak can also send health data, such as battery AUV battery status to the USBL.

The vessel was found at 3,008 m water depth. The ice in the search area was not as thick as had been expected. An initial plan included the possibility that a hole would have to be created in the ice to deploy the AUVs and navigation and positioning systems through. However, they were able to deploy the AUV from the vessel, as would be normally done. Operating under ice means that there is no opportunity to abort the mission in case of a AUV fault. Ice is also usually a source of significant noise so Sonardyne’s advanced Wideband 2 acoustics were important for working in such conditions.

For ease of deployment, the Ranger 2 was configured with a Gyro USBL transceiver. This comes with inbuilt attitude, heading and reference sensor (AHRS) and is pre-calibrated, making it easy to deploy on vessels of opportunity. A second Ranger 2 Gyro USBL system was also on hand, ready to be deployed from the surface of the ice, if the S.A. Agulhas was unable to get through the Weddell Sea’s sea-ice. Both were LMF systems, enabling tracking at ranges beyond 7,000 m, to meet the Endurance22 team’s potential under-ice tracking requirements.

LMF refers to the frequency of the acoustic signals used. Most of Sonardyne’s MF, or medium frequency, systems work on a frequency (19 – 34 kHz) optimized for most ocean water depths, typically 5,000 m – 7,000 m slant range. Using a lower frequency, or LMF, which is 14-20 kHz, allows signals to travel further. Lower frequency signals attenuate (i.e. spread or get absorbed) less in the water, this is why whales use low frequency sounds to communicate over tens of thousands of kilometers. Sonardyne has proven LMF tracking out to in excess of 11,000 km. While the water depth was only around 3,000 m in the search area, sea ice could have meant the vessel might not have been able to get very close to the site. Having this longer range gave them more reach, should they have needed it.

Now that the wreck has been successfully located and documented, the Sabertooth platform will also used to collect full photogrammetric coverage of the wreck and its debris field, 4K video and a 3D scan of the wreck. According to the expedition website, the resulting graphical data will be precisely scaled allowing the wreck, together with its equipment, fittings and contents, to be recorded “to a level of accuracy comparable to that of an archaeological survey” on land. Because of the wreck’s historical monument status, materials from the site are not allowed to be moved, recovered or disturbed – but researchers hope that the data collected from this expedition can be used to create 3D models for further study by historians and archaeologists.