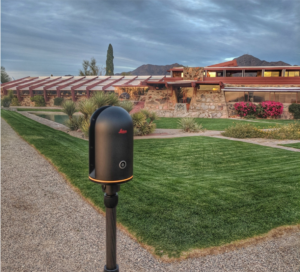 For preservation or restoration projects, documentation is necessary before any work can begin. Most of the time, contractors can use existing building drawings, models and blueprints to assess what changes may need to be made. However, when it came to preserving Taliesin West, a somewhat unique problem emerged.

Though Wright created detailed plans and drawings for most of his architecture clients, when Wright built Taliesin West, he took a more experimental approach. His approach was often to start with a rough sketch, and then build and iterate in stages, often making changes on the fly. Jeff Goodman, Director of Marketing & Communication for the Frank Lloyd Wright Foundation, says that’s indicative of the experimental spirit in which Taliesin West as built, but it unfortunately didn’t leave much of a paper trail.

“At his own home, he was constantly experimenting, changing, and didn’t do drawing of these sites. Until now, our preservation team didn’t have anything to work off other than photographs.”

The best of both worlds

The Frank Lloyd Wright Foundation, tasked with preserving the visionary architect’s legacy, wanted to truly understand Taliesin West and create maps and plans were there were none previously. But perhaps even more than that, they were seeking a way of bringing more people to the site – even if that meant doing in virtually.

“Coming to the sites is not going to be possible for everyone,” says Goodman, “It is really important to us that we don’t leave anyone behind in terms of what they can see and experience.”

Both of these needs lead the Frank Lloyd Wright Foundation to undertake a project to attempt to scan the property and get both architectural accuracy and create a model that could be explored by visitors that were miles away – so they approached Lecia Geosystems with this unique challenge.

When scanning, and really, for most of reality capture, there are two opposing needs. One has a focus on visualization – those that really want to see what’s there, or understand a site better. The other has a focus on accuracy, and these are the users that are used to working with point clouds. In this case, the Frank Lloyd Wright Foundation is at the intersection of both: looking for an immersive experience but with data that is accurate for restoration and preservation.

Leica Geosystems partnered with the Frank Lloyd Wright Foundation for the scans of Taliesin West. Leica scanned the site with their 3D scanning system, the Leica BLK360. The scanner takes 360-degree images and also generates a point cloud; allowing for extremely accurate measurements of the windows, walls, and everything else – including the rocks, foliage and sculptures on the site.

The point cloud data was registered with Cyclone Register 360 and was then transformed into an immersive 3D experience. The scans, which included over 800 setups and a total of 10 billion points, took approximately 60 hours over four days to capture. The equipment included the Leica BLK360 and Matterport Pro2 Camera, used with Leica Register 360 and Matterport’s capture software, which was in a beta release at the time of the scanning effort.

Just as hard as it looks – and then some

At the outset of the project, it was clear that there would be some significant challenges. The Matterport Showcase was limited to smaller models, and at the time, the camera could not be used outside. Goodman describes the challenge the campus itself presented: the large, complex buildings, narrow passageways, and many features that make the structures unique.

“[Wright] blurs the lines between the built environment and the natural environment in a way where you don’t know where the building ends and nature begins,” says Goodman.

At SPAR 3D, Brian Smith, Construction Technologist at Leica Geosystems and Product Manager at Emerging Technologies laid out some of the challenges in a presentation about the project.

“The lighting had such an impact on the interior space,” says Smith, “Everything is windows and glass and it makes a lot of difference.”

Because daylight was required to capture the site, the scanning efforts also had to work around the guided tours of visitors that passed through the space as frequently as every ten minutes at peak times. Ultimately, Smith and his colleagues worked through a solution that produced the final results.

“We were able to utilize the newest technology, including the BLK 360 from Leica and Matterport Pro camera combined together in a fused sensor technology that will allow us to share this built model in an immersive sense online for everybody to be able to use,” said Smith.

Burkhard Boeckem, CTO of Hexagon Geosystems also sees the potential for this to be used beyond preservation efforts.

“With the seamless integration of the BLK360 into the Matterport showcase, people can experience precise, 3D data plus the imagery that comes out of the BLK360 directly in an immersive reality, for visualization, real estate, architecture.”

Taliesin West was just named as a UNESCO World Heritage Site, along with eight other Frank Lloyd Wright buildings. Thanks to this innovative scanning project, interested visitors can tour the site virtually both inside and out no matter where they are located. The next property the foundation plans to make available is Taliesin, Wright’s summer home in Wisconsin, and will continue to use Taliesin West as a digital laboratory to test new and groundbreaking technologies.