The biggest announcement at this year’s HXGN Live conference was Leica’s new Cyclone REGISTER 360. Though it’s compatible with all of Leica’s scanners the application serves as a sort of companion app to the BLK360, and Leica hopes it will bring the same simplicity to the point-cloud registration workflow as the latest scanner brought to 3D capture.

When I caught up with Leica VP of business development Faheem Khan for more details, he told me that simplicity is only half the story. The software has also been designed to bring smart automation, powerful QA tools, and significantly faster processing to the point cloud registration workflow. Like the scanner it shares a name with, this new version of Cyclone should appeal to novices and professionals alike.

The most obvious change is the look and feel. During the development of Cyclone REGISTER 360, Khan said, Leica hired a UX (user experience) designer to make the software more intuitive to use. You’ll see that the interface has more in common with the apps packaged on your laptop than previous Cyclone products—and this should make it significantly less intimidating for novice users.

Leica’s software designers and engineers also put a great deal of work into reducing the complexity of the registration workflow itself. Khan explained that previous applications required users to perform separate steps for extracting targets, creating normals, indexing, cleaning outliers, pattern matching, and image alignment. Cyclone REGISTER 360 asks the user only to load up her scans and press a button. The software then automatically runs these processes in the background to produce a nearly final deliverable. 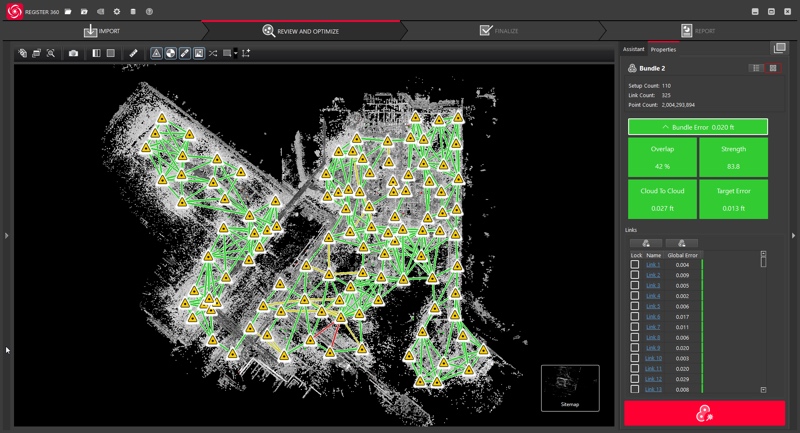 Cyclone REGISTER 360 shows you the network of scanner setups, with lines indicating their connections. The green boxes on the right show numbers for bundle error, overlap, and strength.

Leica also made a priority of building in simple, intelligently designed tools to help users validate the registration and correct for any errors.

Here’s a sample of the functions that Cyclone REGISTER 360 offers for QA/QC. One view shows each individual scanner setup, complete with lines that show which setups were registered together, and color-coding to show the quality of the registration. On the side of the screen, you’ll see a panel to the side that offers quick reference to hard numbers on registration error, percentage overlap, target error, and more.

Cyclone REGISTER 360 also includes tools for advanced users interested in interrogating the data further and examining problematic spots. Khan showed me one such tool, called Tru Slicer, which lets you define a cross-section of the registration for review. This is useful, for instance, if two scans have registered together against a wall: you can move the slicing tool up and down to check that the wall is flat at every level in your data.

In the last stage of the validation process, you can use one of Cyclone REGISTER 360’s smart tools for adjusting the registration. Each tool is designed to make Cyclone functionality simple enough for novices to use, while offering more intuitive ways for experts to manipulate their data.

When the QA/QC process is complete, users can generate a registration report with information on overall accuracy, and whether the final deliverable meets the acceptable tolerances of the project.

Here’s the rare instance where Leica has intentionally broken the cardinal rule of software design and increased friction for the user. To generate the report the user is required to click a button indicating that he understands and accepts the accuracy and quality numbers generated by the software. Khan tells me this is because Leica wants the user to own and validate the accuracy of their data rather than relying on the software entirely. This drives home the point that each user is ultimately responsible for their own data. 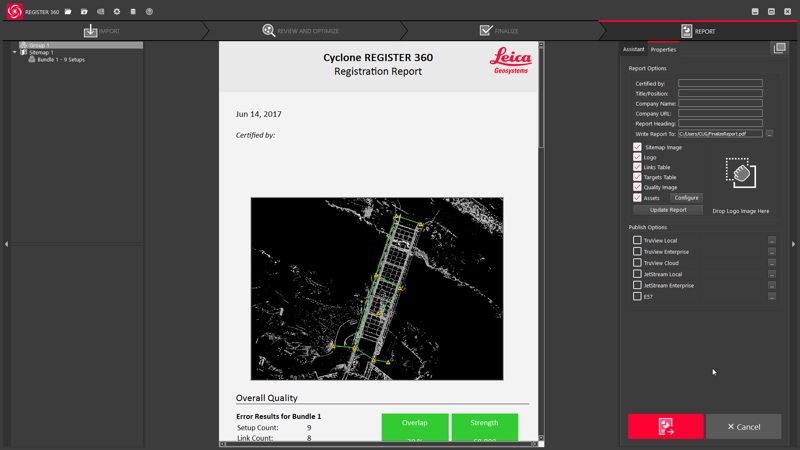 The last step, of course, is publication. Users access a panel on the side of the screen and simply check a box for every format and output they want to create. Khan says the software runs these processes in a batch, meaning that a user won’t have to return to their desk each time they want the machine to spend a few hours generating a new file. A few clicks here and you can have files for MicroStation, AutoCAD, as well as a TruView cloud upload, or a TruView executable to load on a thumb drive for easy viewing.

There are times when you would want to use Cyclone “classic” instead of Cyclone REGISTER 360. For one, Khan tells me, Cyclone can handle a much larger number of setups—10,000 or more—where Cyclone REGISTER 360 is designed to handle smaller projects. The classic version also includes more options for expert users.

However, there’s one big reason to use Cyclone REGISTER 360: speed. Khan says that the software is fast enough that it can take you from loading your scans to publishing a final deliverable in under five minutes. He also stressed that this is still a Cyclone product, so users can move data back and forth as the project (and the expertise of the user) dictates.

The software has a surface simplicity that should appeal to novice users and a great depth of functionality below the surface that should appeal to advanced users. Khan says you can think of it as an attempt to put the IP of Leica Geosystems behind three buttons: one to register, one to QA and optimize, and another to publish.

Cyclone REGISTER 360 will be available at the end of August and will be offered free for users of Cyclone who are on maintenance licenses.