ILMF Keynote: LiDAR is a Crucial Tool for Understanding Earth

ILMF 2016 kicked off on Monday with three keynotes. The first came from Dave Gallo, who is best known for giving one of the top 10 most downloaded TED talks of all time. Dave has recently moved on from his position at Woods Hole Oceanographic Research Institution to take the very impressive title of Senior Advisor for Strategic Initiatives, Center for Climate and Life at the Lamont Doherty Earth Observatory of Columbia University. Suffice it to say that he knows a lot about mapping and technology.

To begin his keynote, he promised that he would share with the audience “some of the thinking that we, at Woods Hole, had about exploring earth.” He claimed not to know very much about LiDAR, which may be true if you compare him to the average ILMF attendee, but that hasn’t prevented him for developing a vision for LiDAR as an absolutely necessary tool for the future of humanity.

What are the problems we need LiDAR to solve?

We count on the ocean for the air we breathe and a lot more, Gallo said. Almost two billion people worldwide depend on the ocean as a primary food source. The oceans touch everywhere on earth—affecting weather patterns, earthquakes, and volcanic activity.

At the same time, we have only the most basic understanding of it. “We think we have a grasp on the ocean,” Gallo says, “but we don’t. By some estimates, we’ve explored less than 8% of the earth’s oceans.” 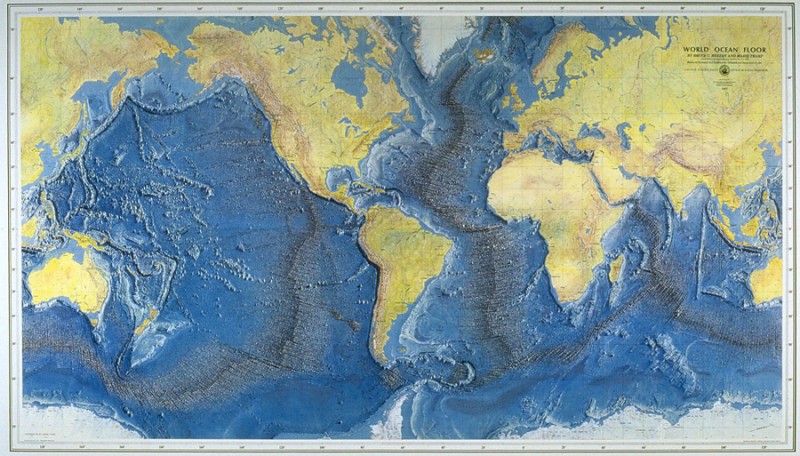 Map of the ocean floor

The earth’s oceans, for instance, include a mountain range that is 50,000 kilometers long. It has peaks higher than any mountain on land, and valleys deeper and wider than the Grand Canyon. And we barely know anything about it. In fact, the ocean is full of stuff that we’re completely ignorant about—and need to learn more about in order to be better citizens of earth.

“It’s getting to be time that we understand it,” Gallo says, because the impact of humans on earth is undeniable. If you look inside a fish, for instance, you’ll see plastics, in the flesh you’ll find pharmaceuticals, flame-retardants, and more.

How does LiDAR help solve those problems?

As he went on, it became clear that the instruments and methods we use for telling the truth about the ocean are underdeveloped. Even while Gallo was at Woods Hole, the mapping of the sea floor was so incomplete that they’d often launch their deep-water submarines expecting to find a mountain, but find flat land instead.

What these expeditions produce is similarly underwhelming. Though videos of underwater life are astonishing, they’re lacking in the context needed to understand their full import. When an expedition returns with a box of photographs and video tapes, this makes it impossible to explain these things in any meaningful way. “The big thing,” Gallo says, “is to map them.”

He also spoke about his work mapping the Titanic, which involved taking thousands of photos. This is great to look at, but also only goes partway in telling the story. “Putting it in context is more important than the images themselves.”

To that end, Gallo says, we can use technologies like LiDAR to build virtual worlds where the fusion of the optical and shape information are already there. This will allow thousands of people to interact with these amazing things as if they were all playing a video game at the same time, to explore the areas where these amazing lifeforms live, or see where the Titanic rests on the ocean floor. It will allow people to see them in their correct context and begin to understand the ocean better. And this may give us a better understanding of the earth overall.

We need to make this type of teaching an experience, Gallo says. And it’s not hard to imagine that LiDAR is the way to do that.