HoloBuilder is a solution for construction teams that uses 360° photography to capture and document progress on the job site. The elevator pitch for HoloBuilder, says VP of product management Christian Claus, is that it is “a Google Street View for the job site that allows stakeholders—and the decision-makers especially—to check out the site without being there.”

HoloBuilder’s platform can offer significant advantages over other means of reality capture. Its benefits include speed, high ease of use, flexibility, low base cost, fast ROI, and scalability. It’s not a flat-out replacement for 3D scanning, but it is a complementary technology that offers a lot more utility than its modest price would lead you to believe. 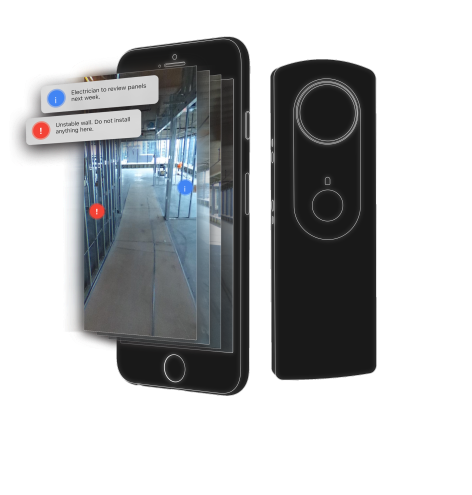 Capture hardware: a mobile device and a 360° camera

The capture portion of HoloBuilder’s solution is the JobWalk app, which enables workers to record visual site data using a simple, off-the-shelf 360° camera (such as the $330 Ricoh Theta S). The process works like this: A user mounts a camera on her helmet and walks around the job site. She carries an iPad with the JobWalk app, which she uses to locate the images by tapping on the floor plan where they were captured. Claus calls it “capture as fast as you can walk.”

With its latest release, HoloBuilder has added functionality to enable stakeholder collaboration, meaning you can set permissions to allow specific users to view or contribute to the capture data. You could, for instance, send out ten foremen with Ricoh cameras to walk a site at the same time. Claus says this workflow enabled one customer to finish a full capture of a thirteen-floor hospital in just 2 hours.

The second part of the solution is the web viewer and web editor. These tools allow stakeholders from inside or outside of the team to “walk the site and annotate it, ask questions, highlight interesting points,” and perform quick, rough measurements on the dimensions of a space.

Using these tools, a superintendent can pull out his phone to check the sequence of construction for a specific area, or to look at the piping that was put in behind a wall before it was closed up. As Claus explains, this saves him the trouble of getting over to the site, walking around to “look behind corners,” or, “if things are worse, rip out the wall.”

Since HoloBuilder combines a high speed workflow with low-cost capture easy enough for anyone to perform, Claus says the platform is able to offer an immediate return on investment.

“Once you have an intern capturing the site every Wednesday,” he explains, “it’s not a cost—It’s actually making you money because the decision-makers now have the ability to answer questions faster. The finance department doesn’t have to waste time by driving out to site, calling in to the site, and or even flying to the site in order to see what the situation is, or whether they can pay the sub or not. Instead they just pull out their phones and check it.”

Claus explains that HoloBuilder is built on a proprietary deep technology stack. This is important to note because enables the platform to offer a number of options for data storage, whether you need it on a specific continent or on-premise. This deep technology stack is important for another reason: It handles the already “light” 360° data in a way that makes the viewing platform smooth, fast, and scalable. HoloBuilder claims that you can store an unlimited number of captures for an unlimited number of floors.

Given those abilities, it’s no surprise to hear that some customers use HoloBuilder to capture and store data for a whole site over the entire project lifecycle. To help customers get the most value from that comprehensive set of historical data, the HoloBuilder includes time travel functionality.

Claus demonstrates by showing me a photo of a room. In the particular photo we look at, it is unclear exactly what the room is designed to be. To figure it out, he says, “I can actually jump to the very latest date of capture, which is ten days later. Now you can see, OK, this is actually a co-working space for an office.” Using HoloBuilder, you could also select a single viewpoint and see how it changes over time. “You can take it all the way back to when they were putting in the floor, or all the way to when the contractor came in.”

Capture your site regularly, then, and the HoloBuilder viewer becomes a quick-reference guide for the site’s conditions as it was being built. “This allows the decision-makers to answer questions while the project is going on,” Claus says, “but also to have this evidence, to download a view-only format to their computers and have it accessible for 50 years, or 100 years.” 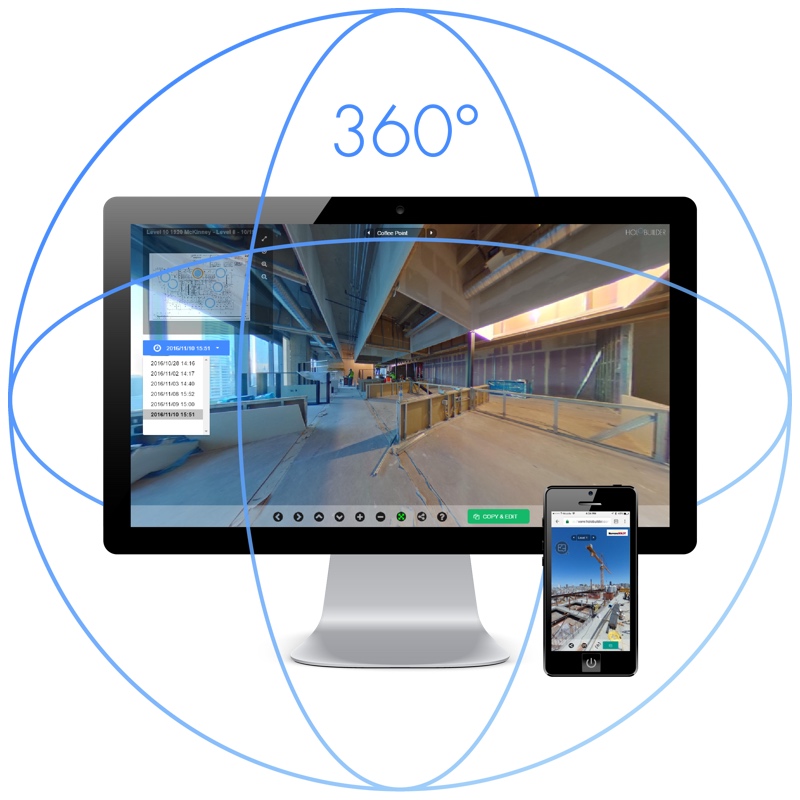 The Elephant in the Room: 3D Capture

When I asked Claus if he thought HoloBuilder could replace laser scanning for a job site, he said yes—In certain circumstances.

He mentioned a customer who was set to scan a hospital project in San Francisco to gather as-built documentation. After running the numbers and looking at the job requirements, this customer found that 360° photography with HoloBuilder was more than sufficient. “On this project,” Claus says, “they have replaced laser scanning with 360° reality capture using HoloBuilder. So there are use-cases where this can happen, but we also know that laser scanning is great for exact measurements—so they can live side by side on the same site.”

As if to back up Claus’ point that HoloBuilder and laser scanning can co-exist on the same site, a blog post recently published on LinkedIn made the case that using the technologies together “has vast potential for BIM modeling.”

Often a company’s survey team will be collecting and registering the data (e.g. laser scan point clouds) and the BIM modelers will be editing it into Revit models. The 360° images provide a way for the BIM modelers to become familiar with a scene they have not visited. This familiarity enables any remaining ambiguities in point cloud data to be identified in the 360° images e.g. the position of pipes being created in Revit.

In other words, adding 360° imaging to your reality capture portfolio could have benefits you haven’t even thought of yet. For more information about HoloBuilder, including data storage, security functionality, and pricing information, see the website here.