It’s temping to think of Hangar Technology as a drone service provider, but that would be a gross oversimplification. Senior director of marketing Joshua Meler describes Hangar as offering the “world’s first partner-integrated, internet-scale platform designed to put robotics to work by automating a modular end-to-end data supply chain.” In more direct terms, Hangar connects parts of the ecosystem–like drone operators, autonomous drones, cloud processing, big data systems, sensors and so on–and facilitates automated data capture that uses any and all parts as necessary.

Even more simply, Hangar turns data acquisition into an on-demand proposition: Order data, and Hangar’s system will get it for you.

If you think this sounds ideal for GIS users, Esri agrees. The GIS giant has recently selected Hangar to be part of its Esri Startup Program, a three-year program designed to help innovative companies blend their offerings with Esri’s platform. According to an official release, the initial partnership will enable ArcGIS customers to request on-demand data, to be gathered by autonomous drones, directly within ArcGIS.

I caught up with Hangar for more. 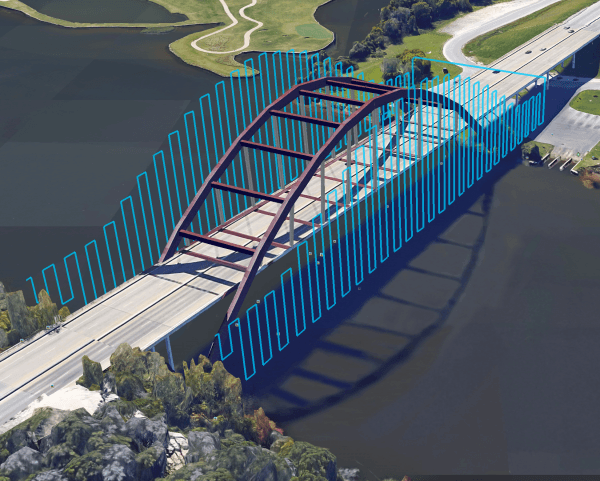 A quick overview: ArcGIS Online users can request and receive aerial imagery in a number of ways. That includes requests by frequency and volume. Requests can be made manually, when data is needed, or automatically based on “contextual triggers” or volume requirements. The system will also save the “digital missions” behind your request, so they can be repeated indefinitely.

Request current, real-world data for a specific feature within ArcGIS, and receive it within 24-48 hours. See the “ground truth” conditions, both for the current day and over time.

What kind of data can you get?

Meler notes that Hangar’s partnership with Esri is meant to correct a long-standing problem for GIS users, namely imagery that is infrequently updated, and fails to offer insight into the facts on the ground. “ArcGIS users have any number of layers of GIS data,” he says. “They can examine data correlations and make observations from the analysis itself, but they often need to relate observations with what is actually happening on site.”

Hangar can solve this problem by offering a large variety of data types, including a number only available through autonomous robotics. That means orthoimagery and point clouds, but also data types that better reflect ground truth for ArcGIS users, such as 360° photos captured over time, façade scans, thermal imagery, and so on.

“As new sensors, services, and technologies emerge,” Meler says, “we’ll include them in our platform, giving new capabilities and insights to customers.”

What kind of insights?

Meler characterizes Hangar’s mission as “opening a data spigot for real-world information” and developing a toolset that allows them to “capture this data at a velocity, volume, and veracity that lends itself to big data applications.” This big-data approach means Hangar will be working with Esri to implement change detection and pattern recognition to “enable a new era of GIS” bringing AI and machine-learning to users of ArcGIS.

What are the restrictions?

“As you’re probably aware,” Meler says, “the FAA has many flight restrictions due to commercial airspace. However, Hangar holds hundreds of authorizations, allowing aerial intelligence to be gathered in just about any area in the US. Outside of that, the only limitation is the time it could take a certified pilot with the proper equipment to access a remote location.”

On this topic, Meler is also hopeful about the future, explaining that Hangar is working with a small number of agencies and pilot cities to prove out their autonomous flight logic, and eventually get an exemption from line-of-sight restrictions.

What does it cost?

Meler says the price depends on the frequency of capture, the type of capture, and so on. He was able to tell me that Hangar is already offering single and infrequent captures in the range of hundreds of dollars for, but insists that Hangar is designed for more frequent use. “For the Esri community,” he says, “assets number in the thousands. Our platform and partner ecosystem create economies of scale, which will drive the price of captures down considerably, as well as enable more frequent captures.”