Since its first release in 2015, Esri’s desktop mapping product ArcGIS Pro has seen a number of small and large product updates. The latest release of ArcGIS Pro includes many new tools for mapping, analysis, database and editing, as well as overall product enhancements that improve usability and productivity.

A new feature introduced in ArcGIS Pro 2.7 is GNSS (GPS) location support. This makes it possible to connect a GNSS device to a laptop with ArcGIS Pro installed in a field setting to assist with feature creation and navigation within a map or scene. While there are Esri products available that integrate GNSS positions and data collection within Windows applications, this new feature enables users to create and edit points directly within the desktop interface, as well orient and update a user location in a project while in the field quickly. There are multiple ways to bring location into a Windows device: connecting a GNSS receiver directly to a computer using Bluetooth, connecting a mobile device to a computer using Bluetooth or use a GNSS-integrated laptop to provide locations to ArcGIS Pro.

Related to the new GNSS location support, Pro 2.7 introduces a new mobile geodatabase that supports data storage and feature collection on the go, turning Pro into a mobile app. The new mobile geodatabase is based on SQLite, which is a popular choice as embedded database software for local/client storage in application software such as web browsers. The data stored on disk can be analyzed and edited further within Pro.

What makes this new feature interesting is that it is the first step towards fully interoperable workflows between ArcGIS Pro and ArcGIS Runtime, which is the technology that Esri’s mobile apps are built on. This means that in the future we can expect more enhanced workflows and applications in ArcGIS Runtime and the Esri suite of mobile apps. 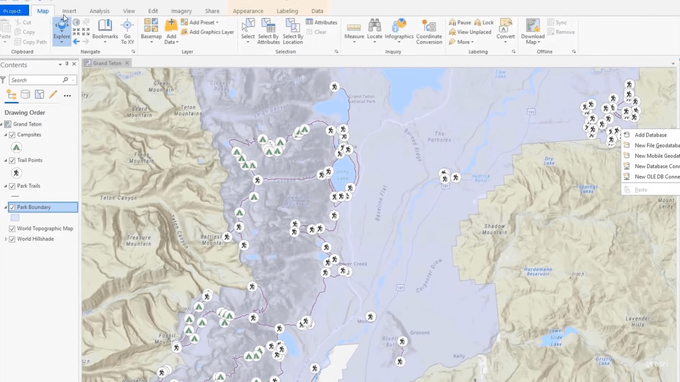 Layer and Feature Blending for Cartography

Now let’s have a look at some of the new features for cartography and spatial analysis. One very nice cartography tool is layer and feature blending, which is a visualization technique for producing nice-looking maps. Pro now enables blending of multiple layers and objects in a single layer without fading colors that occur when making individual layers or objects transparent. This makes for some very nice visualizations, for example when displaying height data. Using this blending technique also blends layers and features in the table of contents.

Pro now offers multiple tools for analyzing and visualizing the movement of objects in space and time, such as cell phones using point track data, which are points on a map indicating where that device was at a given point in time. Although it was already possible to visualize and analyze moving objects in time and space in Pro, a set of newly added tools is geared to special user groups and use cases, such as analysts working with shipping telemetry. The latest added movement tool in Pro 2.7 is the Classify Movement Events tool that uses point track data to determine movement events such as acceleration, turns, stops, and U-turns. This tool is specifically meant for forensic analysis or monitoring ship traffic.

The ArcGIS 3D Analyst extension in ArcGIS Pro provides tools for creating, visualizing and analyzing GIS data in a 3D context. The line-of-sight geoprocessing tool has been enhanced in Pro 2.7 to support integrated meshes. Users can now indicate which lidar points are selectable based on their class code, enabling the selection of points of interest without interference for other points. There is now a smart selecting tool geared specifically to lidar power line point selection, while a new geoprocessing tool extracts powerlines from classified lidar as 3D lidar features. 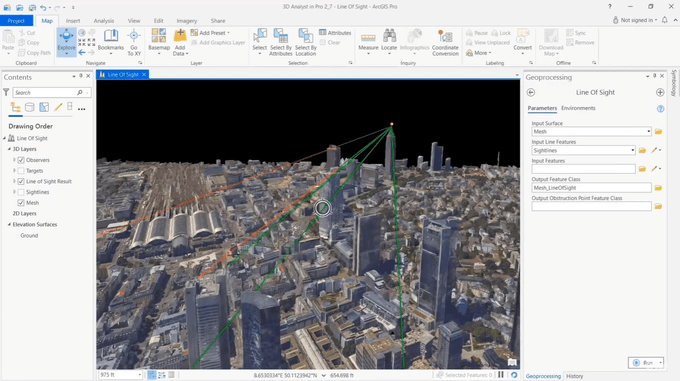 The 3D object feature layer is a new, advanced 3D geometry feature class expands the multipatch, which is an older Esri object format for storing 3D objects first introduced in ArcMap. The new 3D object feature layer has added functionality such as live editing of 3D objects inside and outside of Pro, and export of geo-located features for editing inside third-party applications (including Maya and Blender), in order to enhance them and make them more realistic. Geoprocessing tools are provided to convert existing multipatches to the new feature class format and vice versa.

AR, VR and GIS have finally found each other