Michael Lefsky was a fresh PhD student at the University of Virginia in 1994 when his advisor showed him a full-waveform lidar trace from a NASA forest overflight. It’s no exaggeration to say that lidar would change Lefsky’s life. For the next two decade-plus, Lefsky poured himself into it, comparing data from NASA experimental airborne lidar systems that scanned forests in Maryland, North Carolina and the Pacific Northwest with his own on-the-ground field measurements of trees and forest canopies. The work helped make lidar a legitimate tool in forestry and forest ecology. It also helped lay the algorithmic foundations for the use of ICESat (which orbited from 2003-2009) for more than just measuring ice.

Lefsky showed that ICESat, which had a full-waveform detector, could make sense of forest canopies from space, and he ended up on the mission’s science team. Using ICESat data as the primary source, Lefsky and a team of international collaborators mapped the carbon stock of tropical forests across 75 countries around the world. In 2011, they produced a global forest biomass estimate spanning nearly 9.5 million square miles—about three times the size of the lower 48 U.S. states—and provided much-needed specifics on the state of forest biomass on a country-by-country basis, many of which had scant data.

It may come to some surprise, then, that Lefsky’s Feb. 5 ILMF 2018 keynote had much less to do with lidar than it did with what he prefers to call photogrammetry (as opposed to the more in-vogue “structure from motion,” or SfM).

Lefsky, now a professor in Colorado State University’s Department of Ecosystem Science and Sustainability, has not given up on lidar as a tool in forestry. It’s more that there are some real benefits to combining lidar with SfM. First, although aerial lidar-scanning costs are falling, it’s cheaper to take photos. Second, software such as Agisoft PhotoScan makes photogrammetry a lot less tedious than it used to be. Third, photogrammetry yields the equivalent of first-return airborne lidar—the top of the canopy, and therefore tree heights, from which you can derive a great deal of information about a forest and its ecosystem. Fourth, this type of photogrammetry has been around since the 1930s, so people studying things such as long-term land-use changes have a much deeper history available to plumb (assuming you can get ahold of the photos, which can be a challenge, Lefsky admits).

Lidar still plays an important role: its job is to see through the trees and deliver the digital terrain map. But that only has to happen once, because the DTM generally stays consistent over the span of a few years or decades, seismic surprises and natural disasters notwithstanding. Once you have the lidar-derived DTM of the forest floor, in Lefsky’s mind, you might as well just fly cameras—over and over, if your goal is capturing changes in a forest through growth, beetle infestations, fires, logging or other factors over time.

Lefsky shared a couple of very different ways he’s using SfM. One project involved trying to understand why the 2012 High Park Fire west of Fort Collins (one of the worst in Colorado’s recorded history, it burned more than 87,000 acres) was more ferocious in some areas than others. The suspicion was that it had to do with differences in biomass. So Lefsky’s team flew a lidar—97 flight lines, 1.36 returns per square meter—over both burned and unburned areas. The lidar captured not much in the way of canopy from the burned areas (go figure) but created a nice digital terrain model; over the unburned areas, the lidar captured both DTM and canopy data. Lefsky then procured four-band photogrammetry from 2008 (before the fire). It captured the canopy of what would become both burned and unburned forest. Doing so enabled a biomass estimate for a) comparison with the lidar dataset for the unburned forest canopy and, more interestingly, and b) a forest whose biomass had since gone up in smoke. 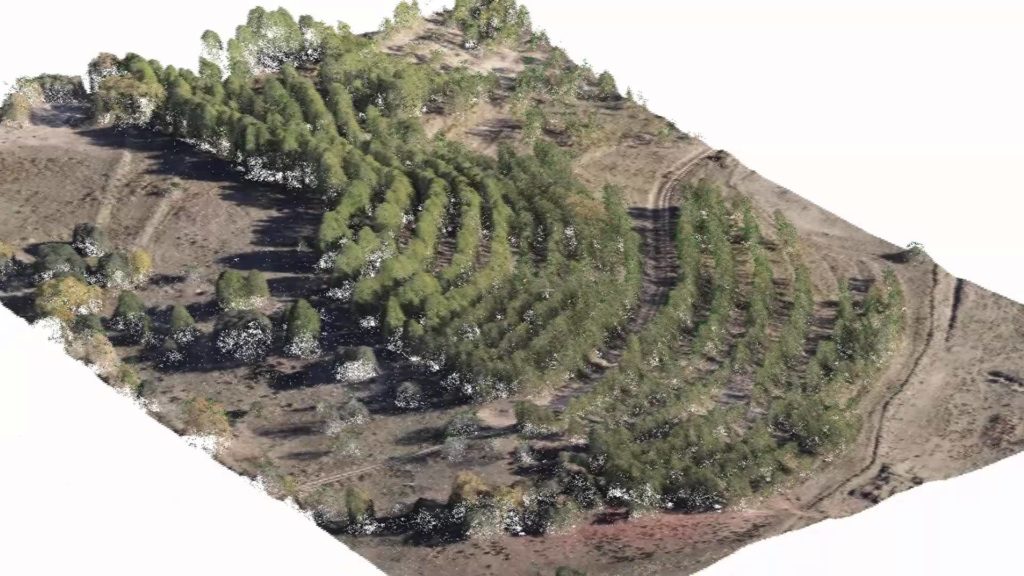 The lidar-based and photogrammetric biomass estimates for the unburned forest jibed, meaning Lefsky felt good about the photogrammetrically-derived biomass estimates for the burned-away forests based on the 2008 SfM flyovers. They showed the areas that burned more severely hadn’t burned in the past and had more of the taller, tightly-spaced trees associated with crown fires.

Lefsky said the results add weight to arguments for programs designed to thin vegetation near homes in wooded areas. “Nobody’s quantified it to this degree, mostly because nobody’s had data from before fires,” Lefsky said.

The data enabled a solid estimate of lost biomass and, just as importantly, provided a way to understand how severely unburned areas will one day burn based on the biomass still there.

He offered another example, this one comparing modern SfM imagery to 1930s-era photogrammetry of Puerto Rico. One needs no lidar underpinnings to demonstrate the stark land-use changes over the intervening nine decades.

The big challenge with doing this sort of deep-historical work, Lefsky said, isn’t so much a lack of old aerial photos—there are tens of millions of them in the United States and elsewhere. The ones taken after 1955 are managed mostly by the U.S. Geological Service and the U.S. Department of Agriculture’s Aerial Photography Field Office (APFO) and, as Lesfky put it, are “relatively easy to obtain.” But pre-1955 imagery, he says, are in the National Archives and “poorly catalogued.”

Be it using new or (very) old photos, combing the strengths of SfM and lidar looks to be yet another example of the sensor fusion that’s proven to be so powerful in aerial systems combining more technologically advanced lidar/spectrometer/visible imaging systems. In Lefksy’s case, it shows that a step back can lead to a creative way forward.