Last week, FARO Technologies announced “the first in a long line of FARO innovation products,” the FARO BIM Scan Localizer. The device determines the exact position of a scanner inside buildings during large indoor scanning projects. FARO promises that it will help stitch together indoor scans automatically in the field to ensure a “complete interior building scan” and provide efficiency gains of 2-5x.

FARO is marketing the device primarily to customers in AEC, including general contractors with large buildings, facility owners and engineers who need to document extensive facilities. 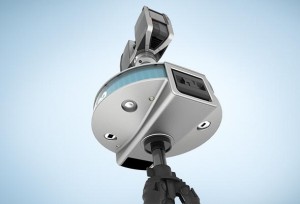 As FARO Senior Product Manager Oliver Bürkler explained to SPAR 3D, the Scan Localizer is an active accessory to the scanner that users mount between an included tripod dolly and the FARO Focus3D laser scanner. The dolly includes wheels to facilitate easy movement of the whole solution.

“The Scan Localizer has a 2D scanner,” Bürkler said, “which creates horizontal scans constantly as you move the scanner around on the tripod.” It combines those with data from other sensors to run SLAM algorithms, which allows it to generate a map of the environment and position the scanner within that map—in real time. 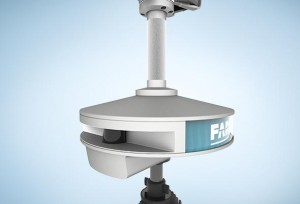 The Benefits of Field Registration

The main challenge the localizer was designed to address, says Bürkler, is a disjointed workflow. “Today, you have the scanner on a tripod and you walk through a building, and you scan and scan and scan, but the registration is typically done by our customers back in the office. If you do this scanning onsite, and you do the processing offsite, you may have instances where you realize a week later in the office that you’ve missed something or that some registrations won’t work because you missed a scan in between and there wasn’t enough overlap.”

Since the localizer works with FARO’s SCENE software to automatically register a user’s scans as he moves through the site, it enables him to check his work as he goes. “It ensures that you have all the registration work done before you leave the site. You’ll know if you captured everything and if the registration is successful.”

A secondary benefit of the localizer is improved performance of SCENE’s automatic registration process.

Since buildings scanned for BIM purposes often include many rooms that look the same—think office buildings or hospitals—they present a challenge to automatic registration algorithms. “Office number one looks like office number fifteen,” Bürkler said, “and the software could easily mix that up. Now, with this additional information from the Scan Localizer, the software knows that a scan needs to be roughly in that specific position, and surely not five meters farther or three meters back. The registration is ensured to be successful.”

FARO is releasing the Scan Localizer first to users that subscribe to their Early Adopter Program. These subscribers can purchase the Scan Localizer at a discount of 20% when bundled with a new Focus3D scanner before March 31, 2016. For more information on the EA program, see SPAR 3D’s coverage.

The Scan Localizer will be available to FARO’s “broader customer base” in the second half of the year.