Exploring the Functional and Aesthetic Roles of the Dragon Bridge

The Dragon Bridge (Vietnamese: Cầu Rồng) in Da Nang, Vietnam, opened to traffic on March 29, 2013. Louis Berger and its long-span bridge division, Ammann & Whitney, were selected to design a bridge spanning the Han River in order to link the city with other key locations in the area. However, it has done so much more for the city and even the country.

The six 3.75-meter-wide vehicle lanes and two 2.5-meter-wide sidewalks have helped fulfill the architecturally driven mandates of the project, but the bridge’s capability to “breathe” fire or water to mark special occasions enabled it to do much more. While the designers never expected the bridge to become a destination structure, the iconic nature and regional importance of the project drew increased attention to the bridge. Today, it attracts large crowds of visitors to its weekend fire-breathing shows and has helped raise Da Nang’s profile internationally.

The Dragon Bridge is an incredible example of what it can mean for a structure to play both a functional and aesthetic role for a city and region. There are a variety of ways that spaces and places can be transformed, and the ability of pieces of infrastructure like bridges to play both of these roles will become more and more important as project stakeholders look to create experiences. The Dragon Bridge’s success in doing so in Da Nang has been recognized with the American Society of Civil Engineers’ (ASCE) Outstanding Civil Engineering Achievement Award (OCEA) for innovative design, which makes their approach and process around this project especially notable. 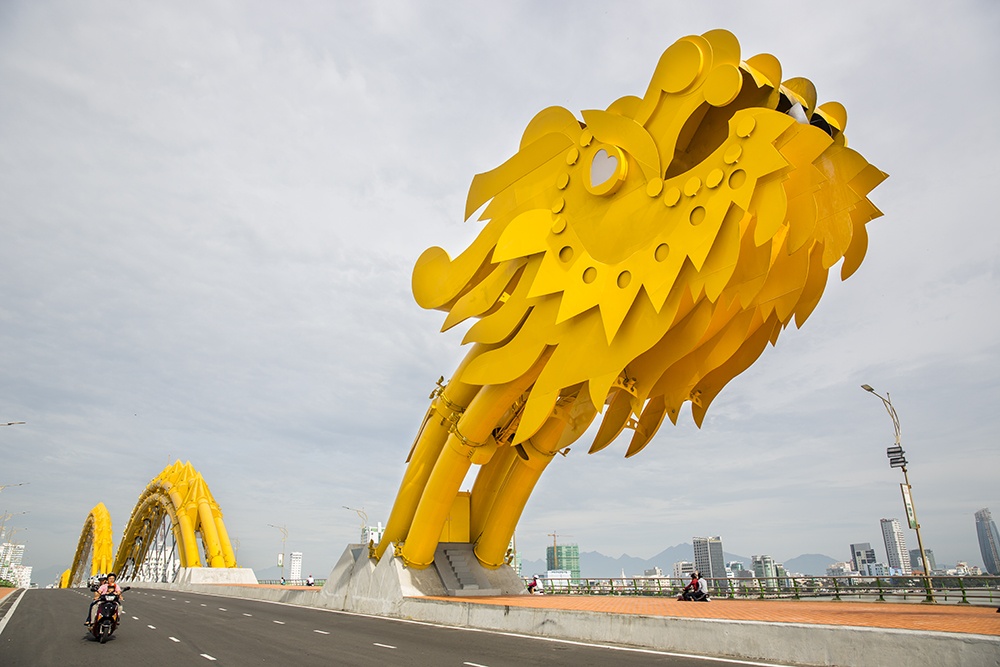 A Meaningful Representation of Power and Nobility

Da Nang is a principal port city, key educational center and critical transportation hub in Vietnam. To strengthen long-term development and sustainability, the Da Nang People’s Committee (DNPC) sought to connect Da Nang with developing eastern sectors, the region’s world-renowned beaches, and the UNESCO heritage town of Hoi An. In order to enable this, the DNPC sponsored an international design competition for initiating a new bridge across the Han River, which meant they were open to new and unique ideas. Louis Berger’s long-span bridge division, Ammann & Whitney, took the lead and came up with the Dragon Bridge concept.

DNPC wanted the bridge to increase mobility and serve as a landmark without overpowering neighboring cultural and historic areas. They were envisioning an iconic structure that could complement and enhance its surroundings, such as the Museum of Cham Sculpture. They required a solution that not only served as a landmark for the city but also minimally impacted both the Han River waterfront and the adjacent public squares. These were challenges that Louis Berger met logistically and aesthetically.

“We definitely understood the impact the bridge would have on people living in Da Nang during our site visits and meetings with Da Nang owners and representatives,” said Chris Gagnon, Louis Berger’s SVP for transportation. “In addition, we also started gaining a better understanding of Vietnam culture and the local community. We provided a solution that was both functional and culturally appropriate.”

Their winning concept – the dragon – is an homage to one of the most revered symbols in Vietnamese culture, representing power and nobility. Louis Berger architects were aware of this most cherished symbol and how it represents some of the aspects of life in Vietnam. Such considerations were undoubtedly a factor in the Da Nang tourism board listing a visit to the bridge as one of its Top 10 things to do in the city. Local tour companies also offer boat tours passing under the bridge. Vietnamese media outlets have called the bridge “a symbol of the city’s new development stage and growth.” 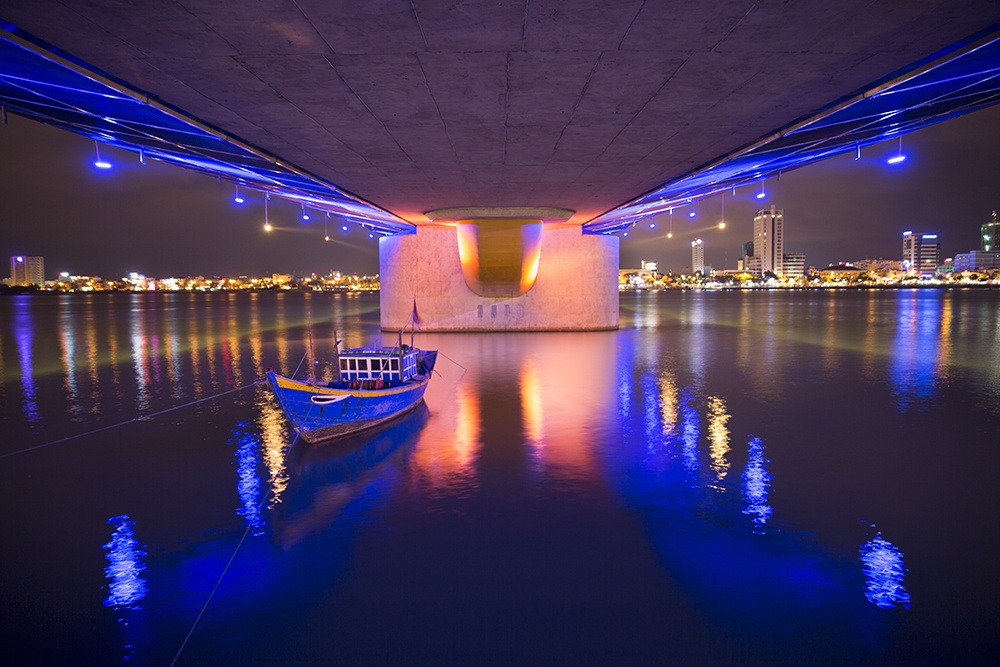 Louis Berger’s goal with the project was to resolve mobility and regional connectivity issues while also creating an instant icon and economic engine for Da Nang. They were able to do this by proposing a parkway-style bridge with an at-grade approach at the western end. The low-deck bridge allows cross-river traffic to integrate seamlessly into city traffic without the need for view-obstructing raised approaches. The bridge’s low profile also lends itself to another unique aspect of the design, which is the “dragon” arch suspension system.

The bridge’s arch suspension system is modeled after a dragon flying across the Han River. The bridge’s pedestrian sidewalks are also influenced by the dragon theme, with the outer edge overlooking the Han River following the undulating pattern of a dragon’s body. This incredible balance between design concept and the logistical needs of the bridge that at the same time serve and represent this powerful symbol for Vietnam is very much intentional, but it was also contingent on a variety of factors.

“Certainly, budget plays a big part in logistical concerns for a bridge project,” Gagnon told AEC Next News. “We also have to think about the client’s goals and vision. It is all about finding a balance to achieve the client’s goal in a cost-effective manner and making the bridge conducive to enhancing its surroundings.”

The project requirements associated with increased mobility and establishing the bridge as a landmark defined the vision for what would become the Dragon Bridge, but the ability to design with intelligence can’t be understated. Decisions around elements like the low-deck bridge were made easier thanks to numerous engineering tools, such as MicroStation for engineering design and Adina, a popular structural tool. These software tools helped refine how many of these elements would work with the bridge, but they didn’t inherently change any processes. These tools helped Louis Berger in preparing their designs, but their architects and engineers still perform many tasks in traditional ways.

Regardless of the impact these new tools are having around conventional processes and workflows, they’re indicative of a bigger transformation that’s happening across the industry. Stakeholder expectations around how an infrastructure project should work and function are changing, and that fact has opened up complications and opportunities. 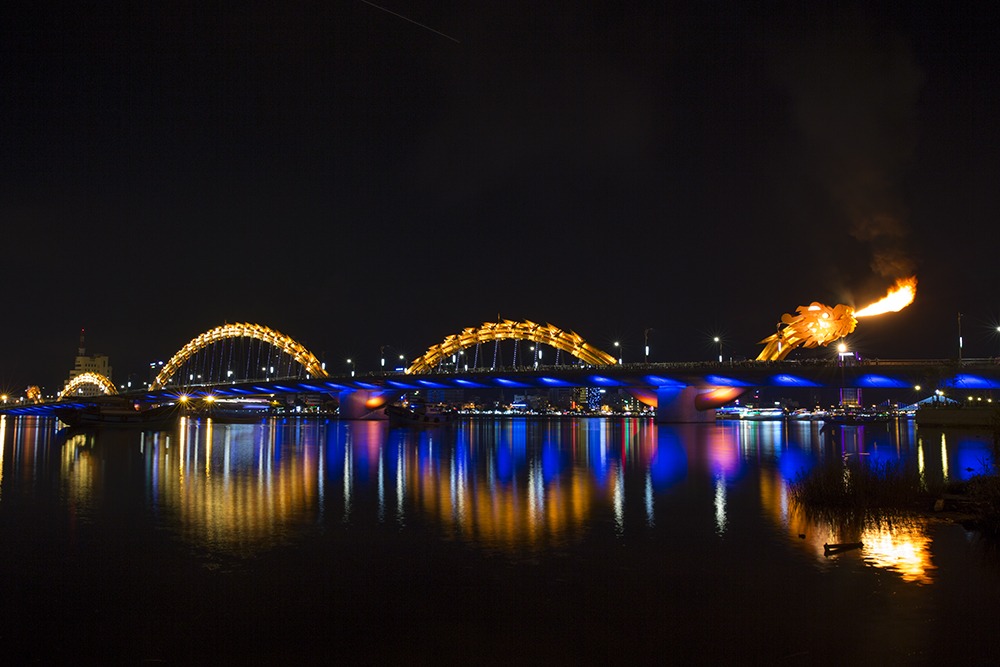 The Importance of Creating “Symbols of a City”

It wasn’t so long ago that the expectations around engineering and construction projects were strictly about either the functional or aesthetic role of what was being built. However, now that new relationships between design and the world have been enabled, the lines between these areas are becoming less and less defined. This evolution has given architects tremendous freedom, but that freedom comes with additional responsibilities.

“People today want an iconic structure that can become a symbol of the city,” Gagnon said. “Cities are moving towards architecturally driven structures. It might raise the cost, but the client sometimes is willing to make that call. There are some great examples in the U.S. states of Florida and Texas, where there are several building designs that are unique and innovative. It is all about giving architectural freedom to the architects and engineers.”

Building designs that are unique and innovative are not in short supply, and one only has to look to Louis Berger’s own portfolio to see a variety of these types of innovation. Budgets are always going to drive how much can or can’t be done on a given project, but the fact that this bridge was able to strengthen regional access to and from the city while also creating a tourist attraction and a boon for economic growth clearly demonstrates what’s possible.

The Dragon Bridge serves as a perfect illustration of what it can mean when the functional and aesthetic roles of a project are working in harmony. It’s proof that regardless of the details, achieving this kind of harmony is more of a question about budget and vision than it is of capability or possibility. 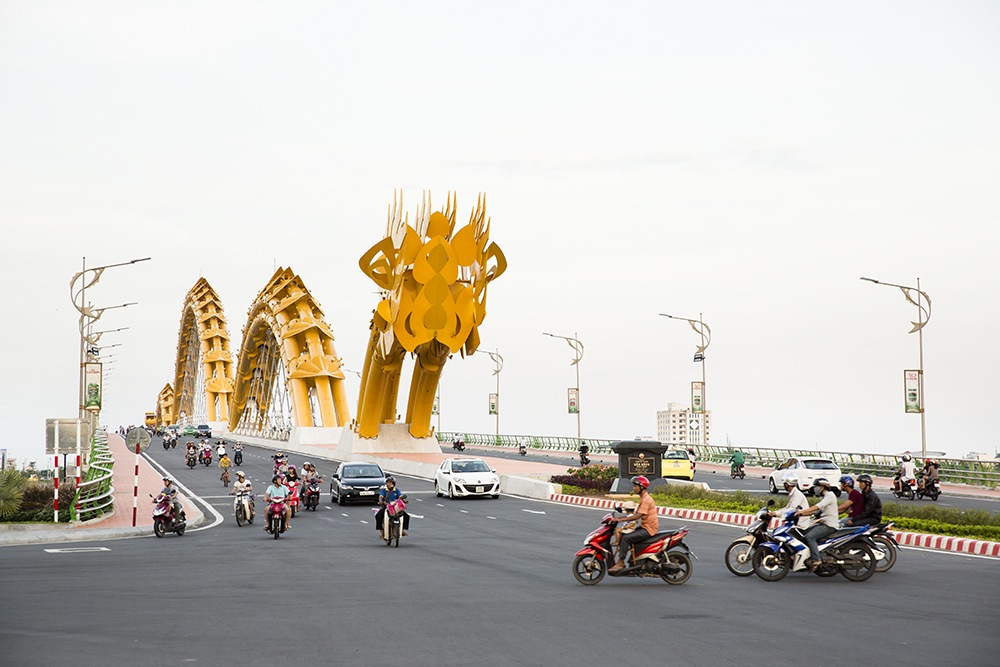