The power of a drone equipped with a camera is undeniable. The problem is, once you’re back in the office with photographs in hand, photogrammetry solutions can take hours to generate the final 3D model. That extra time may seem like a small price to pay given what you get in return, but it’s still a bottleneck preventing us from squeezing all the value out of our UAV solutions.

A new commercial technology developed by Lockheed Martin is set to change that. Hydra Fusion Tools performs real-time 3D mapping from any drone equipped with a video camera. It uses structure from motion (SfM) algorithms to generate 3D point clouds and 3D imagery in real time while your drone is still in the air.

Hydra Fusion Tools is able to model so quickly because it exploits the latest generation of graphics processing units (GPUs). These tiny computers were originally developed to process graphics for visually complex video games. Recently, however, their ability to handle graphical information has been put to use in commercial technologies like augmented reality, and now, photogrammetric processing. 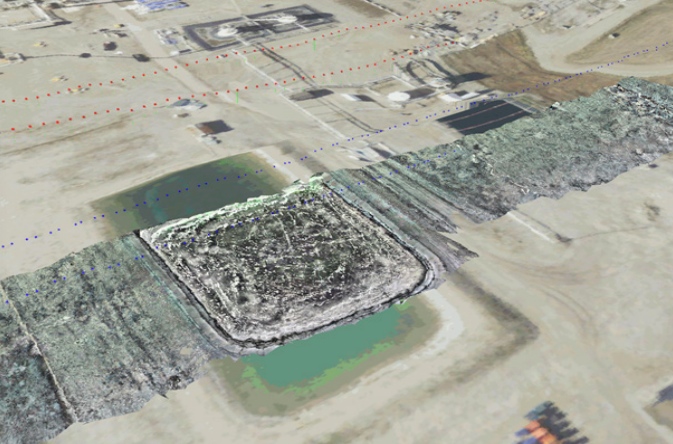 If your computer is equipped with a powerful enough GPU, in other words, Hydra Fusion can process the video beamed down from your drone and generate 3D maps on the fly. Your computer may already have the specs necessary.

As for how fast it goes, John Molberg at Lockheed told New Scientist that the company can already “fly a drone along at 30 knots” and create a map as it goes. (That’s about 34 miles per hour for us laymen.)

The model you generate at that speed might not be survey-grade (30 centimeters per pixel) but common sense dictates that if you slow the drone down, you can get denser data. This means that after one flight to gather coarse data, you could fly the site again to gather more detail on areas of interest. With a long enough battery life, someday you might be able to do all of this before bringing your drone in for a single landing.

Lockheed is reportedly working with one client to map changes as small as 6 millimeters to measure changes in a railroad track.

What else can Hydra Fusion do?

Real-time 3D mapping seems to be the software’s biggest pull, but it can do a lot more. Lockheed is calling Hydra-Fusion the company’s “answer to big data,” since it is designed to take the “assortment of maps, images, video and intelligence” that multiple UAV operators would see and combine them into a “common operational picture.”

Hydra Fusion, in other words, can process data from multiple UAVs simultaneously, localizing it, mapping it, and combining it into one simple display optimized for the user.

The Lockheed product page says Hydra Fusion can do even more, like “compare architectural drawings to actual 3D imagery to gather daily progress updates.” It can also be used to “automate the inspection of large critical infrastructure.” Those two abilities combined should make the software ideal for tracking changes in large, important assets–from construction sites to rail networks.

A toolkit for autonomous drones

Reading Lockheed’s website, Hydra Fusion Tools seems to fall just a few steps short of providing everything you need for a fleet of fully autonomous mapping drones. But that could change soon.

The company has told New Scientist that they are planning to release a SLAM tool called Northstar later in the year. This technology would allow a fleet of drones to 3D map as they fly, and localize themselves within that map. It doesn’t take much to imagine what amazing things that fleet could do.