In a recent article at our sister site UAV Expo News, editor Jeremiah Karpowicz laid out some basic facts about these two capture technologies. The piece is a fantastic first stop for consumers of data who want to dig through the hype and hyperbole to determine the right kind of sensor for their needs.

That piece included a lot of advice from experts in the field, including Lewis Graham, president and CTO of the GeoCue Corporation and general pillar of the survey scene. Graham offered so much useful technical detail that wouldn’t fit into the piece that we decided to give his advice a separate spotlight.

So, here’s a guide that takes you on a deep dive. It offers detailed technical advice that should give you even more help deciding when it is best to use photogrammetry, LiDAR, or both when you’re surveying with your UAV. 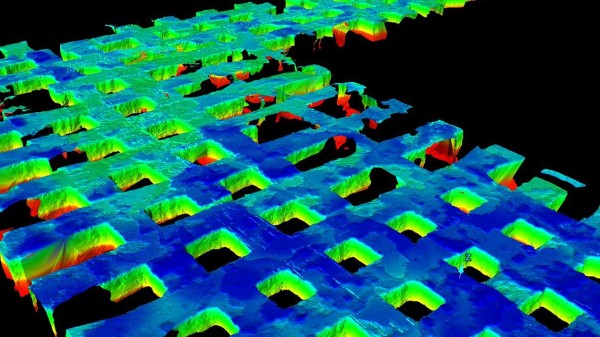 Use UAV LiDAR when…

You are mapping below tree canopy, mine site conveyors, and other obstructions.

Why: Photogrammetry has trouble generating elevation models in areas where objects block the ground.

Traditional stereo photogrammetry, Graham explains, tends to “blunder” when creating a digital elevation map. When measuring elevation for a point on the ground, this method needs two images that can “see” that point. If a tree is blocking the point, it may show up in one image but not the other. This confuses the automation algorithms that match the images. The end result is noisy elevation models.

What about modern photogrammetry? It exacerbates the problem. Once algorithms like Structure from Motion (SfM) were developed, photogrammetry could generate “very dense point clouds, often with a spacing factor of two or so larger than the resolution of the image.” This is called dense image matching (DIM). Unfortunately, DIM generates what Graham calls “first surface models” rather than true elevation maps.

In other words, photogrammetry is not ideal for mapping elevations when the ground isn’t clear from all angles.

Use UAV LiDAR when…

You are modeling narrow objects such as transmission lines, pipes, sharp-edge features (for instance roof edges), and fields of rocks (aggregates).

Why: SfM algorithms and DIM have lower “conformance” than LiDAR. As Graham explains it, “conformance is how well a point cloud models the actual object being imaged.”

LiDAR models, he says, model the object very well because each point in the cloud is measured by a single ray from the scanner. SfM algorithms and DIM are “a bit trickier.” The model doesn’t correspond to the object as well because modern photogrammetry makes rough approximations and then smooths the model out to remove noise. “An unfortunate side effect,” he says, “is that conformance at edges declines.” 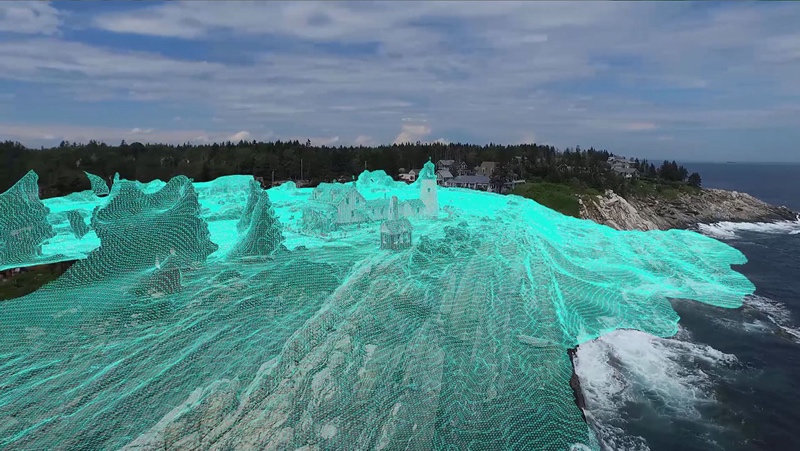 Use UAV photogrammetry when…

You are imaging bare earth mine sites, earth works projects, and other areas that are not occluded by trees, buildings, or equipment.

Why: Drones are cheaper, lighter, and faster. If the modeling you aim to perform doesn’t require LiDAR—then strapping a camera to your UAV will save you a lot of money. In addition to avoiding the LiDAR unit itself, you get to skip the expensive IMU.

Use UAV photogrammetry when…

You are performing a small mapping project—and photogrammetry data will suit your needs.

Why: “It is usually not financially viable to mobilize a manned aircraft for a small-site mapping project,” Graham notes. On the other hand, a UAV is small enough that a single surveyor can throw it in the truck and operate it in the field quickly, and without any help. 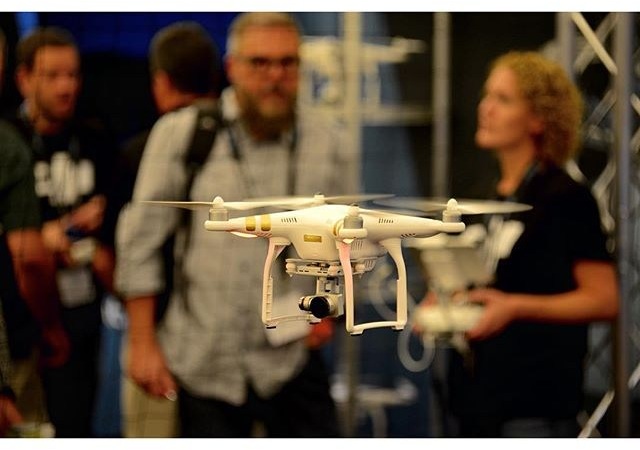 A DJI Drone at the Commercial UAV Expo in 2015

You are performing modeling that requires LiDAR.

Why: Graham explains that really high-resolution data (“say resolutions greater than one meter”) can be tough to gather with aerial LiDAR. This means “one really needs to supplement the data with imagery—the ideal scenario is to use imagery for context and LiDAR for the 3D component.”

Cameras are so inexpensive, and offer such a great value, that there aren’t many good reasons to leave them out of your UAV sensor package.

You Should Use What Makes Sense for Your Business

LiDAR and photogrammetry are both powerful and full of potential if you use them the right way. The key is finding the right sensor for your needs.

Let’s put it more simply. Graham explains that if you’re making a business “out of focusing on clean stockpile yards of relatively fine materials, then photogrammetry (DIM) is the cost-effective solution. If, on the other hand, one frequently encounters projects that require modeling that can’t be performed with photogrammetry, then LiDAR is the obvious choice.”

When performing photogrammetry with a UAV, Graham says you should shell out about $800 or so for a camera with an APS-C format sensor. Here’s why.

If you care about accuracy (and you should), you need learn about ground control. Our blogger Will Tompkinson makes the case here.

Now that you’ve arrived at the end, I have bad news: Nearly every piece of technical advice I’ve laid out above could change in the next few years. The reason is focal plane array (FPA) LiDAR, also known as flash LiDAR or solid-state LiDAR. (Here’s our primer on the technology.)

Graham offers a simple way to understand how FPA LiDAR works. Imagine it as a digital camera taking a picture. Once the LiDAR frames a shot, instead of taking a photo, “a single laser flashes and the scene is captured by an array of detectors.”

FPA LiDARs are perfect for drones because they’re cheaper, smaller, lighter, and more geometrically accurate than the LiDAR units we’re currently using—which means they offer the best of both worlds.

FPA LiDARs are also perfect for crash-avoidance systems in autonomous vehicles, which means demand for them is going to skyrocket in the next few years. As companies start producing FPA LiDAR at scale to meet demand, the cost of the sensors will fall. This means there will be a lot cheap sensors available for UAV use.

Graham makes a bold prediction. “Within the next three years,” he says, “FPA LiDAR supplemented with a camera will be the standard kit on a mapping drone.”

What is 4D imaging radar? And why might it be the key to cars with full autonomy?

What is 4D imaging radar? And why might it be the key to cars with full autonomy?