Arvizio’s MR Studio platform is an enterprise solution for building mixed-reality experiences from 3D data and sharing them with stakeholders for real-time collaboration.

Though it may sound like a lot of other mixed-reality platforms you’ve heard of, there are a few important features that set it apart. It offers you the tools to build your own AR experiences without learning to program, pull 3D data of many different types stored in multiple databases, and serve huge amounts of visual information to your AR devices and tablets without loss in resolution. Oh, and it’s optimized for handling point clouds, too.

Build Your Own AR Experience

As CEO and co-founder Jonathan Reeves told us, most augmented- or mixed-reality work today is performed by design studios that build bespoke experiences for their customers or in-house developers that work with game engines like Unity. If your enterprise doesn’t have the funds to hire outside help, or the internal resources to build an AR experience yourself, then your options are limited. Arvizio’s key business proposition, Reeves tells SPAR 3D, “is to provide a platform that allows a rich mixed reality experience without requiring the development of software.”

Arvizio’s MR Studio platform offers all the basic functions needed to build and share an AR or MR experience. The MR Studio Director application, for instance, handles loading models, editing them for sharing, as well as processing, multiway sharing, and remote communication with video, audio, or data.

Reeves also tells us that the platform integrates cleanly with external IT systems, which makes a simple process of visualizing and sharing data stored in existing databases.

“It employs a data integration fabric with connectors to import or export data with a wide variety of external systems,” he says. “The platform has over 100 pre-built processors to allow connection with databases, big data systems, message bus interfaces, and industrial IoT systems.” He adds that the system includes a GUI for building data integration workflows simply, and ad hoc. 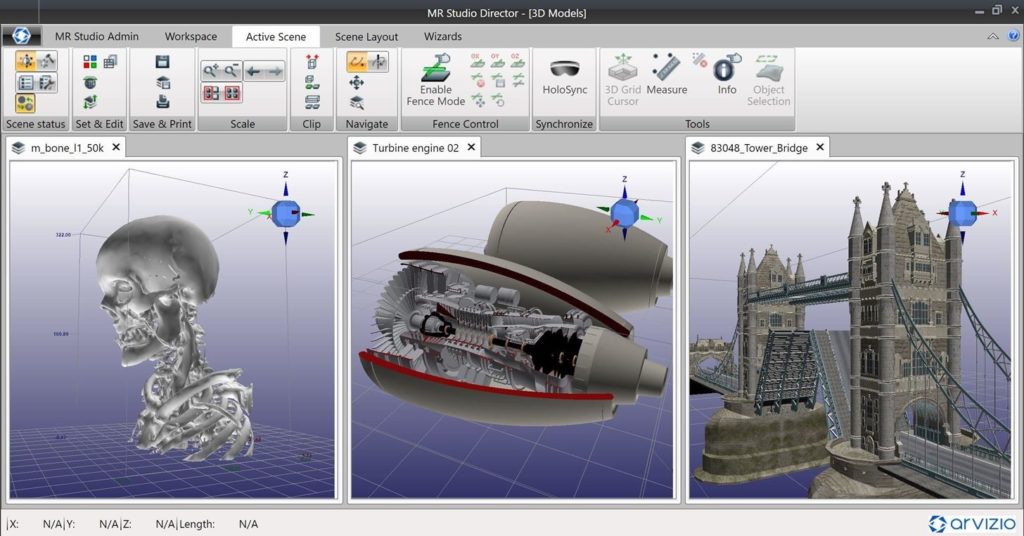 Perhaps Arvizio’s greatest market differentiator, however, is its commitment to what Reeves calls a “universal spatial format” designed to process and render a multitude of 3D data types for use in mixed reality.

Integrating multiple data types smoothly is a challenge, but so is rendering the large volumes of data for use in the HoloLens and other mixed-reality devices—which have processing power you’d expect from a mobile device.

Unlike the more common approach to rendering borrowed from video games, which process only the part of the data the user can see at any given point in his exploration of the model, Arvizio’s platform pre-processes all the necessary data. It then presents the user with “simplified versions of the whole model for navigation” and shows “detailed sub views” of the complex models according to how the user interacts with the 3D data.

“HoloLens has practical limits of 100k to 200k polygons,” Reeves says, “but scalable real-world models may require millions of polygons, so we simplify the large models and ensure the correct portion of the model at the best possible resolution are in the field of view.” Think of it as detail on demand.

The processing method is effective enough that Arvizio promises compatibility with devices ranging from PCs to AR headsets and tablets.

What about point clouds? While many mixed-reality platforms can’t handle these large data sets, Arvizio has made them a focus. Reeves says it was crucial for the platform to handle points in order to meet the needs of engineering, mining, and construction applications, which rely on real-world data supplied by aerial and terrestrial scanning.

Recently, the company went one better and announced that it had optimized its point cloud processing. With its new algorithms in place, Arvizios MR Studio promises to handle point clouds comprised of billions of points without lag, and without losing LOD.

Review a 3D model in AR together on Zoom? Now you can.

Review a 3D model in AR together on Zoom? Now you can.