Keynote Preview: How will intersecting technologies help send us to space?

We caught up with keynote speaker Alan Campbell to get his thoughts on where Draper thinks our next big tech solutions will originate.

This article is part of our Road to Geo Week series.
Click here to register for Geo Week in Denver, CO, February 6-8, 2022.

Just as Geo Week facilitates the coming together of geospatial technologies and the built environment, Draper combines diverse disciplines to imagine and create new intelligence solutions that are being utilized across the globe - and beyond it.

Draper works to solve problems with advanced technology, getting access to better information by operating at the intersection of research, government and industry. By recognizing that siloed industries and isolated roles can lead to blind spots, they build interdisciplinary teams to collaborate across industries where there may not have been overlap before.

Alan Campbell, Space Systems Program Manager at Draper, will join the 2022 Geo Week conference as a keynote to discuss why breaking down the walls between industries and looking for tech in unlikely places can bring us closer to solving complex technical challenges – including the future of working in space.

Thinking about space from the ground up 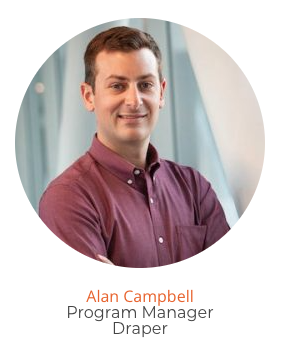 Campbell’s background has (if you’ll pardon the pun) always gravitated around space.

“I’m kind of a born and raised aerospace engineer- studied a lot of subjects, but really fell in love with the space industry back in high school,” he says. After earning degrees in both Aerospace Engineering and Orbital Mechanics, he has worked on Apollo-related missions and, at Draper has started to pursue a more analytical role, focused on the opportunities of business development in space.

In his current position, Campbell is focused on making sure that Draper has the resources in place to meet the needs of the next decades worth of goals within the space business. One interesting facet of his research is that sometimes future, other-worldly needs can be met with technologies already in development.

“I want to talk about the near future – the use cases that demonstrate how we can leverage the technologies that are being developed for traditional markets, and what we’re trying to in space, and vice versa.”

One of the areas in which terrestrial technologies can inform space exploration is autonomous vehicle technology, says Campbell.

“When you think about what’s going on with autonomous driving, there are similar sensing requirements, similar sensing modalities and technologies that you need in order to do things like rendezvous and dock with another spacecraft, or land things on the moon. They have slightly different requirements but very similar needs.”

“And so we’re seeing a lot of convergence, especially among the smaller companies and the more these companies are trying to get commoditized types of operations in space, among automotive sensors.”

In spending a lot of time thinking about how humans are going to be interacting in space in the next 5, 10 or even 20 years, Campbell knows there are a lot of moving parts.

“You need to know how they are going to live on the moon, move around the moon, and perform science. Then as we learn how people interact in space for longer periods of time, we can continue to build up our capability base to eventually go to Mars.”

Finding innovation and partnerships on earth

To accomplish this, there are a number of remote sensing and other technologies that will be needed, and, says Campbell, even things that may not be new technologies.

“We can think about some of the things a lot of the Geo Week audience is doing in geo and for mining or manufacturing, and be able to do similar things on the moon. There’s going to be a different set of constraints, but how can we make things that will enable people to live there on the surface for extended periods of time, and then similarly onward to Mars?”

One answer to this is partnerships, rather than competition or acquisition. Rather than the costs and challenges of mergers or acquisitions, cooperative partnerships can keep both companies doing what they do best, but combining their strengths, says Campbell.

“We’ve seen this through history; whenever humankind has a really hard problem they’re going to solve – one person or one organization just doesn’t have the technical chops to address all of those different parts of the technical problem efficiently.”

“I think a much more efficient long-term strategy is going to be partnerships, and you’re starting to see that already. For example, Lockheed Martin and General Motors announced a partnership last year working with NASA to build rovers for the moon. And I think you’re going to see even more of that – not just amongst big companies with different specialties, but getting together a lot of smaller companies.”

If you’re interested in hearing more of Campbell's vision for the future of space, and more, use the link below to register to see the keynote live on February 6th.

Keynote preview: What is the future of digital collaboration?

5 geospatial questions that will be answered at Geo Week