A quick scan of the campus

THE HAGUE – Looking back at this year’s SPAR Europe, one of the most pleasing things from this reporter’s perspective was the way it brought the laser scanning businesses (hardware, software and services) into close contact with people from some of the many technical universities and institutes who are working at the “pure” edge of 3D research.

Busting out of the ivory tower were two of the keynote speakers, Professors Luc Van Gool and Marc Pollefeys, who both work at Computer Vision Lab of the Swiss Federal Institute of Technology, ETH Zürich (Professor Van Gool is also based at the University of Leuven, Belgium).

Professor Van Gool’s presentation on “Image-based 3D city modelling: mobile mapping as moving target” highlighted some fascinating results of his research into (inverse) procedural modelling, which is now moving beyond buildings to look at more difficult challenges such as tree canopies and brick walls. One of the more interesting technological tidbits from his talk was his use of a portable, hemispherical “mini-dome” for scanning cuneiform tablets.

Professor Pollefeys spoke about his research into “Extracting 3D data from image and video data.” One of the goals of this work is to enable fast, automated video-based modelling of cities. The results we saw were impressive, although windows and homogenous areas still present modelling problems.

Another fascinating project saw Pollefeys and his team build a 3D reconstruction of ancient Rome in 24 hours using only photos found online using a Google Images search. Looking at the high-quality models of the Coliseum and Trevi Fountain that resulted from this challenge, it’s surely not too long before some smart entrepreneur has us all downloading an app to do something similar with our holiday snaps. Ditto for another cool research endeavour from ETH Zurich, interactive navigation of casually-captured videos. As Professor Pollefeys explained, this allows the viewer to scroll pretty seamlessly between collections of videos of the same event taken from different angles in a unified 3D environment. Perhaps the concert movie of the future will be a crowdsourced 3D camera phone extravaganza, rather than Woodstock, mark two. 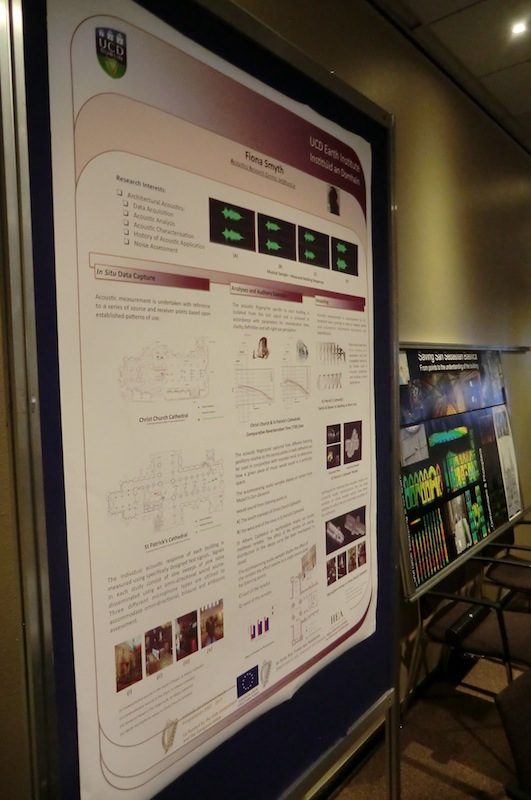 Alongside the keynote and other main stage presentations, there was also a chance for delegates to discover more about current projects and research at a range of academic institutions, all of which were exhibiting in the University Pavilion, a new addition to SPAR Europe this year. As well as ETH Zurich’s Computer Vision Laboratory, the pavilion housed representatives from the University of Arkansas – Center for Advanced Spatial Technologies (CAST), University of Stuttgart – Institute for Photogrammetry, University College Dublin (UCD), the Polytechnic University of Valencia and Hokkaido University – Graduate School of Information Science and Technology.

The snapshot of 3D imaging developments provided by the pavilion showed not only how advanced much of the academic work has become, but also the breadth of areas under research – everything from building information systems and campus facilities management (Arkansas) to dense image matching (Stuttgart), simulating humans walking around a scanned 3D indoor environment (Hokkaido), helping architects and heritage experts restore San Sebastian Basilica (Valencia) and creating an accurate acoustic model of two cathedrals as they were in the 19th century (UCD).

Inevitably, not all of these initiatives will bear fruit, but the stronger the links between those doing the research and those creating commercial applications, the brighter the future for the whole 3D sector.

Scanning Japan: 3D Laser Scanning and Imaging Symposium at The University of Tokyo a Rousing Success

Scanning Japan: 3D Laser Scanning and Imaging Symposium at The University of Tokyo a Rousing Success