A detective in the 3D classroom

Why one vet headed back to school

MISSISSAUGA, Ontario – When we reported last year on the launch of Introduction to 3D Crime Scene Mapping & Reconstruction as a class in the University of Toronto’s Forensic Science curriculum here at the Mississauga campus, we told you there was a local police officer already signed up.

Little did we know at the time he was a detective with more than 30 years of service, having started as a constable in 1978 (when this writer was three years old).

So, why is Detective Vincent Eagan taking the time to sit with a group of college kids and take a class on 3D data acquisition techniques?

“In June of last year,” he said, “I was at the Canadian Police College and were doing ballistics day on the firing range outside of Ottawa, and one of the instructors there had been at a workshop there with Eugene [Liscio, of AI2-3D and the IAFSM, who’s teaching the course]. They were shooting a car and measuring with trajectory rods, but one instructor was capturing it all with a camera for photogrammetry. 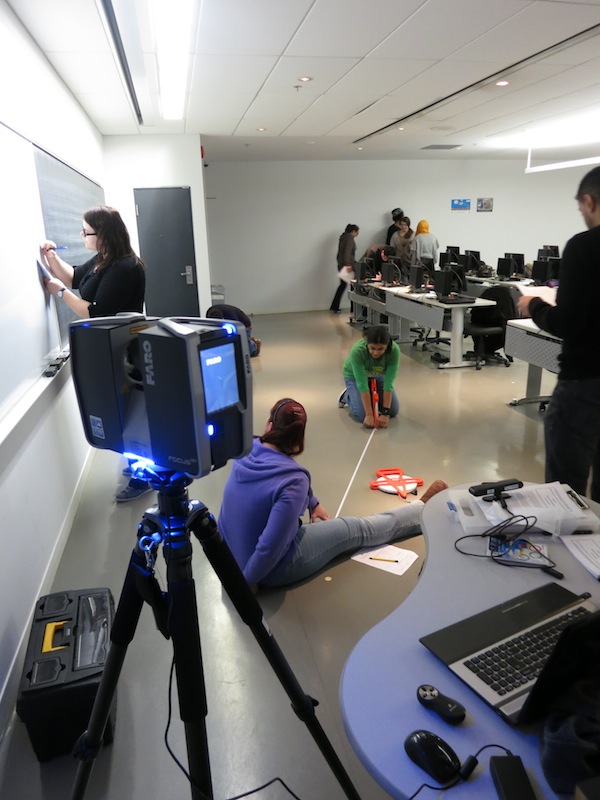 Eagan has a lifetime of experience taking photos of crime scenes and knowing how hard it can be to pin down an angle or get the right look at something.

He looked at the 3D data and said to himself, “There’s great opportunity there.”

“So much of what we do is in a 3D world,” he said, “even a fingerprint. It loses detail right form the get go when you go from a 3D surface to a 2D representation … Some of what Eugene is teaching me has me excited. There’s great possibilities for learning this technology and processing crimes scenes in less time.”

Further, he said, “there’s an increased expectation for witnesses to have academic qualifications.” Because it’s not being offered by a supplier of product, the learning carries more weight on the stand, he said.

Which is not to say he doesn’t see plenty of obstacles to 3D data acquisition technology being fully adopted as part of standard police practice. The laser scanners themselves are cost-prohibitive, he said. “Two agencies in the Toronto area have the scanners,” he said, “and the feedback I’m hearing is that it’s user-friendly on the front end, but harder on the back end.” He said they put a scanner in their proposed budget last year, “but there wasn’t a strong expectation that that would come in because it’s just not real common out there. It needs to get known a bit more … I suspect it’s coming.”

Also, the difficulty of displaying the 3D data in the courtroom is a barrier, he said. “The technology is geared toward just showing images and there’s a lot more work that could done at that end if you were going to introduce 3D images,” he said. “I’m not sure what the answers are for that … Currently, the best product may be reduced to a photographic representation rather than showing the modeling, but the way things are going I’m sure we’ll figure something out on that end.”

As for the classroom setting itself, “it’s very humbling,” he said, with a laugh, especially when working with the software supplied by the likes of MicroSurvey (MapScenes Point Cloud) and Eos Systems (PhotoModeler). “I know how to approach the crime scene and what’s needed for that, but it doesn’t feel like I’m any further ahead of the other students, and I really draw on them and there are parts of these courses where there’s a lot more math and statistics than my current level of knowledge. If I’m in a group setting, I really rely on their knowledge that they have as science students … I really am a technically challenged person for these products, and this is where the other students really equalize out with me.”

“I don’t feel like I’m leaps and bounds ahead of them about anything,” he continued. “I do understand right out of the starting gate, and think, ‘wow, I can really use this,’ or, ‘I wish I had had this a few years ago on that case,’ but for this type of product you’re driven as much by your failures as anything else.”

He said he’s also much more practical with how the technology might be applied. “They’re looking at the wow factor and the limits of the technology,” he said, “and I’m looking at how I can simplify it, make it work on the job. For example, with these different programs out there for photogrammetry, you have to put these markers in the scene, and I’m thinking, ‘Can I do this without having to put these coded markers all around my scene?’”

“Whatever I know from my yeas in policing, that levels the playing field.”

Digging deep into 3D at USF