3D Systems announced Thursday it signed a multi-year deal with North America’s largest producer of chocolate, The Hershey Company, to co-develop 3D-printed chocolate products and other foods as well as commercialize a new class of prosumer 3D printers for edibles.

Financial terms of the deal were not disclosed. Chuck Hall, 3DS CTO, said partnering with a world renowned food brand such as Hershey will help mainstream 3D printing. 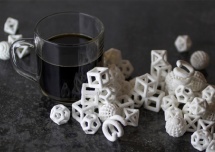 “Whether it’s creating a whole new form of candy or developing a new way to produce it, we embrace new technologies such as 3D printing as a way to keep moving our timeless confectionery treats into the future,” said William Papa, chief research and development officer for the maker of Reese’s Peanut Butter Cups.