In 2017 Douglas Pritchard set out to scan the Cologne Cathedral in Germany, once the largest building in the world and still the biggest Gothic church in Northern Europe. Contemporary construction methods have produced much larger buildings since it was finished in 1880, but that doesn’t mean the project was easy.

Here are the unique problems presented by this project, and the creative approach Pritchard took to get the job done.

The primary challenges, Pritchard said, were the size and complexity of the structure. “It was difficult to be sure that as much surface area as possible is covered,” he explained. “The other thing is that it’s a Gothic cathedral—it’s not like a square box where you can scan from four different points in the building. When you have a highly articulated facade due to the Gothic architecture, you really want to take the scanner all over the place to capture as much detail as possible.”

The structure, which includes two extremely detailed spires standing 157 meters (515 feet) high, is also unusually tall. “This is one of the reasons I wanted to scan the building,” Pritchard said. “Because of its height, you have to look at ways of positioning the scanner so that you could document as much as surface area as possible. You have to be innovative.” 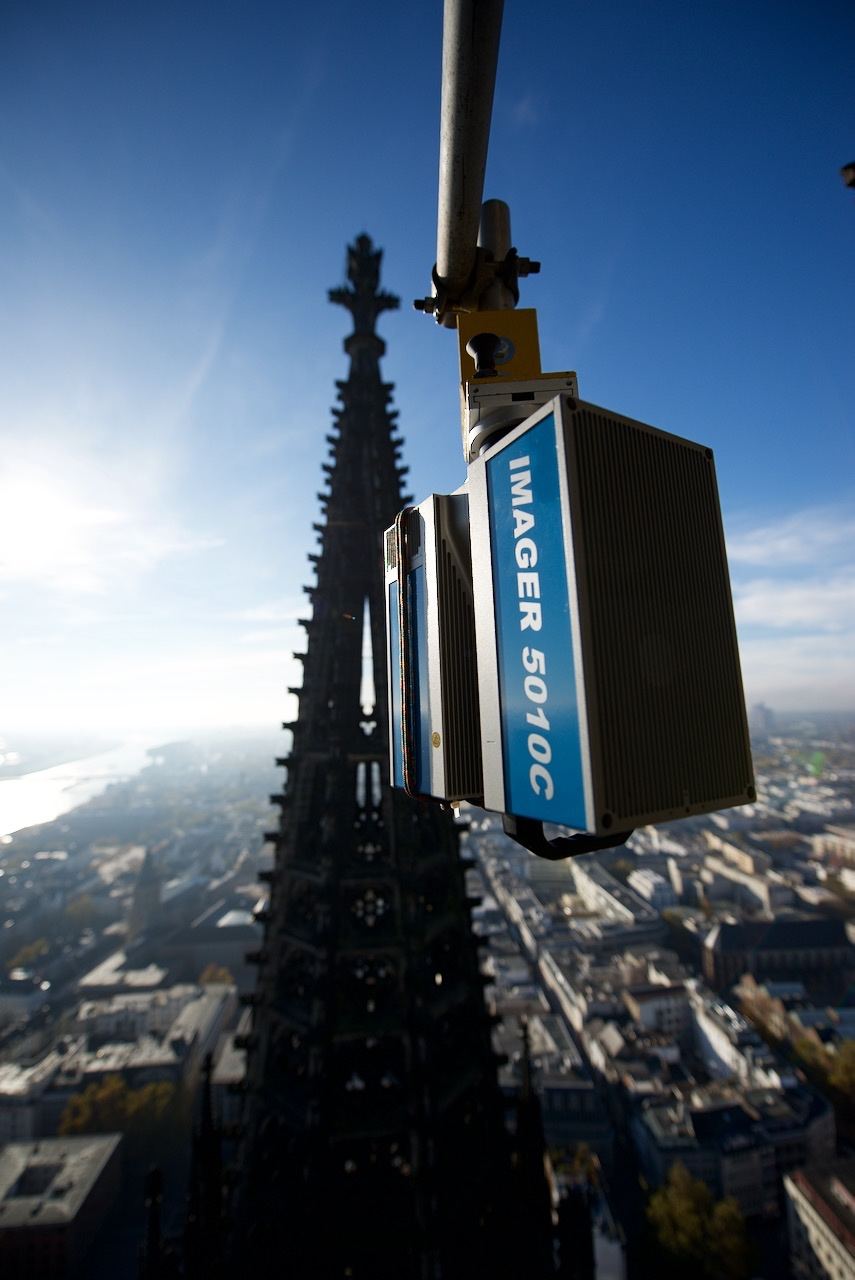 Pritchard overcame these challenges with a little old-fashioned ingenuity.

“I’ve been involved in a number of projects where I’ve been able to propose using rigs, extension arms, and even inverting the scanner,” he said. “In the case of the gigantic cathedral towers, I was able to position the Z+F 5010X scanner vertically, and then invert the scanner, pointing it downwards at the 150-meter level. And there are these openings on the tower, so you can move the scanner in a clockwork pattern, pointing it up and then down. That worked quite well.”

Even with an approach to scanning that ensured full coverage, Pritchard found that the sheer size of the structure made processing difficult. With the number of scans he needed to register, he was pushing the limits of his software.

Again, ingenuity proved key. “I created smaller data sets that link,” Pritchard said. “I’ve broken the scanner data down based on height, and if it’s interior or exterior. You have the two towers, obviously, but when you look into the chapel area and other parts of the cathedral there are very distinct levels. So there’s a 20 meter level, 27 meter level, and so on.”

Throughout our conversation, he repeatedly stressed that he could not have achieved adequate results without the recent evolution of 3D scanners to include HDR cameras. “If I went there with a scanner that didn’t have an onboard camera,” he said. “I think that would have been really unfortunate. I would have spent this massive effort to get the dimensional data, but no imagery.”

Why is the imagery so important? For historical preservation purposes, Pritchard explains, we need to think of the scanner less as a simple survey tool and more as a multimedia tool. He offered an example to explain why: “The cathedral has a very advanced conservation department. They’re looking at this as a way to document the facades of the building and identifying areas that need to be repaired or replaced.”

When asked if he would have considered using an external 360° camera to supplement the scan data, he said that this would have added another degree of complexity to an already difficult project. “One of the reasons I chose the Z+F 5010C was because of the HDR camera. That was particularly important when the scanner was either raised up very high, or extended outward off the facade of the cathedral. Having the camera plane and the laser at the same point meant I could remotely operate the 5010C as a scanner or a camera or both.” 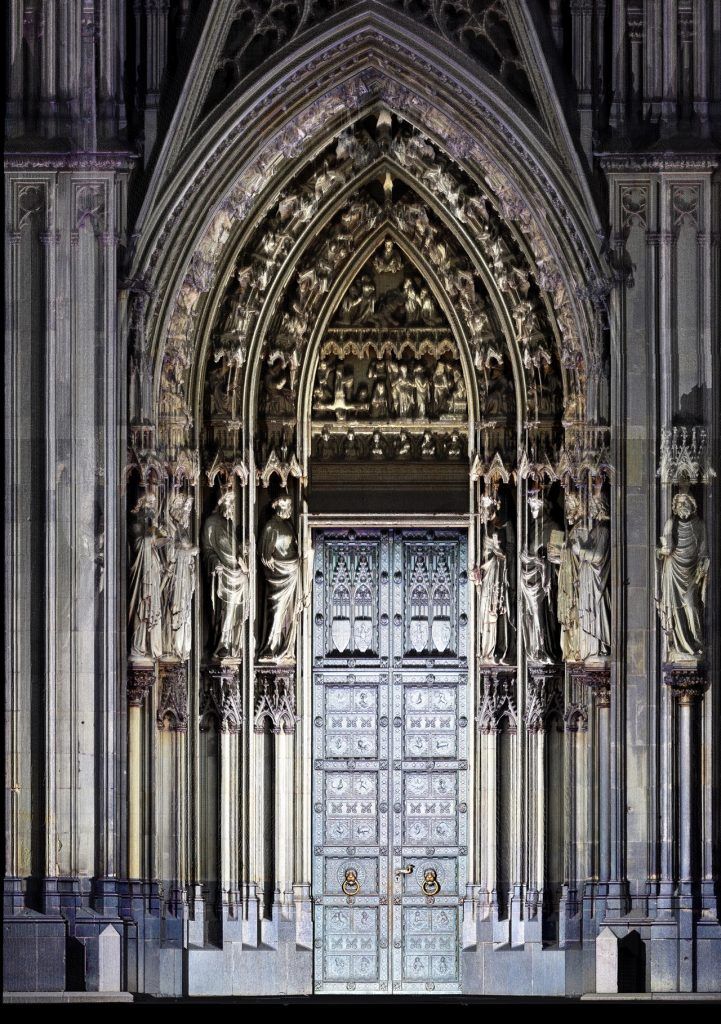 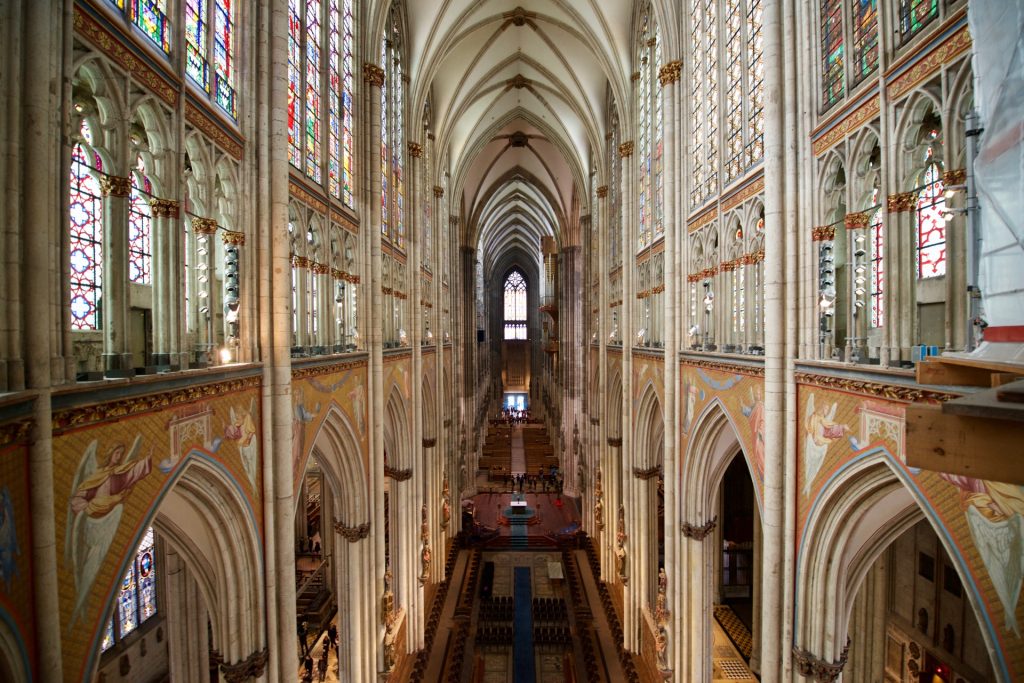 A high angle on the cathedral. 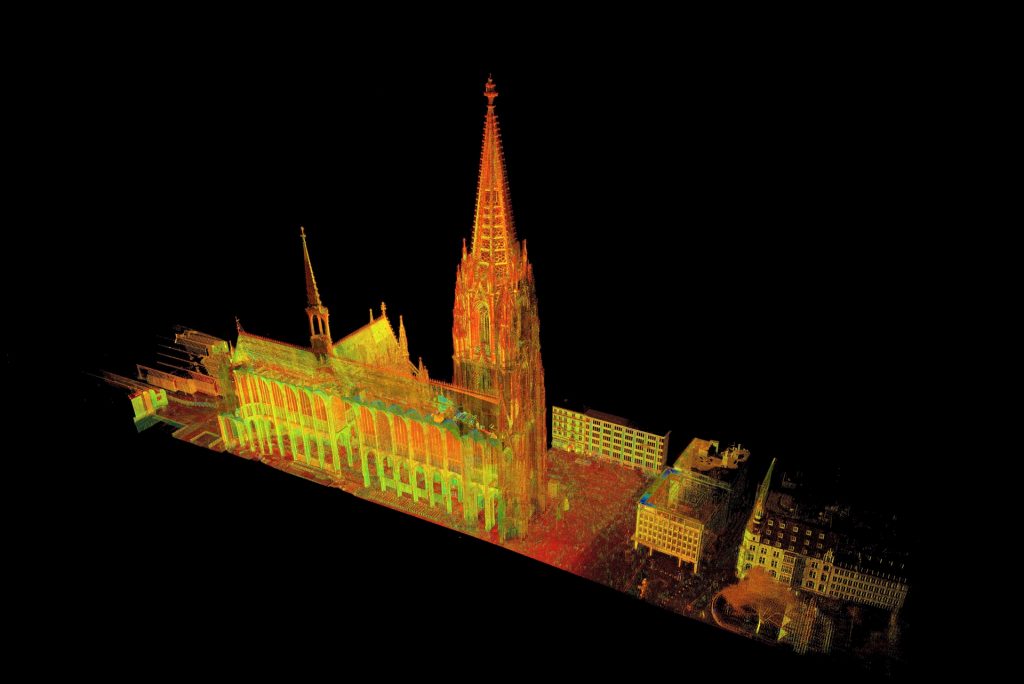 The data, of course, will see a number of applications. For one, the Cologne Cathedral Administration (Metropolitankapitel der Hohen Domkirche Köln) that commissioned the project will use the scans as a base line for determining how to approach conservation of the structure.

Pritchard says he is also working with CyArk to ensure that the data will be archived properly for future use. And one future use is already bearing down on us: “The world heritage precinct at Cologne is going to change over time, and a couple of 1950s buildings are going to come down. The scan data will be of tremendous value to do the planning and design.”

The rich data, complete with imagery, will also be crucial for public engagement. Pritchard has been working with Hochschule Fresenius Köln, a Cologne-based school with a 3D animation program run by Chris Wickenden. Together, they are developing creative ways to increase public engagement with the 3D data he so painstakingly gathered and registered.

Pritchard is also working toward this goal with the students in his program on heritage in the digital age at Johns Hopkins university. “The students will have access to the data, and some of the data will be discussed, analyzed, and critiqued,” he said. “That’s important that it isn’t just going to sit on a shelf somewhere looking amazing. We’re looking at opportunities for the cathedral to demonstrate, and to put this data out to the public.”