Portable 3D scanner manufacturer Creaform, Inc., has been acquired for $120 million by AMETEK, Inc., a publicly traded, global manufacturer of electronic instruments and electro-mechanical devices with annual sales of $3.6 billion.

“Creaform significantly expands the range of non-contact metrology products offered by our Ultra Precision Technology business,” said Frank Hermance, AMETEK CEO, in a statement. Shares of AMETEK (NYSE: AME) are a component of the S&P 500 Index.

Headquartered in Levis, Quebec, privately held Creaform is on track to post $52 million in sales for 2013. Overall sales are split nearly evenly between the regions of the Americas, EMEA and APAC.

Creaform employs over 300 people with manufacturing operations in Quebec and Grenoble, France. It also has sales operations in the United States, France, Germany, China, Japan and India.

Creaform said this summer that sales of Handyscan 3D scanners, described as the only portable, metrology-grade scanners on the market, increased 32 percent in the first half of 2013, compared to the same period last year. 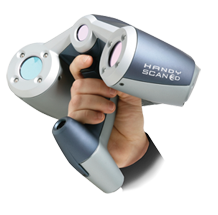 Sales of its MetraSCAN 3D scanners and HandyPROBE portable CMMs jumped 58 percent in H1 2013. Both devices feature Creaform’s TRUaccuracy, the high-accuracy measurement technology behind all its 3D optical measurement products, which is not impacted by vibrations in shop floor conditions. Creaform said the HandyPROBE is particularly efficient at measuring parts that can’t be moved to a granite or cast iron table.

Creaform launched its robot-mounted, 3D scanner, MetraSCAN-R, for automated inspection in May. The company said earlier sales of its Go!SCAN 3D white light scanner, its fastest 3D scanner, “exceeds our expectations” since its release in October 2012.

Recently, Creaform began targeting the oil and gas industries with its products.