Which UAS lidar system should you buy?

The International Lidar Mapping Forum (ILMF) has long been the place where technical experts in the use of lidar and remote sensing technologies have met to exchange technical information and experiences of advanced workflows. This year we saw reiterations of best practice pertinent to continuous stream of new operators from the unmanned airborne survey (UAS) space.

There perhaps was no better forum than this to come back to that frequently posed question of “Which UAS lidar system should I buy?”

It was the question posed straightaway in the Lidar Solutions for AEC session. First answer back was “well how much money have you got?” This may have appeared flippant, but at ILMF discussions are much more oriented towards data processing solutions that provide the required data rather than solutions that have been jury-rigged with lower cost components.

To this end, any further answers to the question were dependent upon application. Given that lidar systems excel in vegetated environments, the prevailing opinion was that multiple returns are better and that characteristics such as tighter precision versus a higher density of points leads to increased efficiencies in post processing. This was a discussion that played out in favor of manufacturers of higher-end, more expensive systems (RIEGL, were you listening?).

Later in the week, however, I was privileged to moderate the UAS Technology session, which approached the question of which lidar to buy by providing an updated view to best practices in UAV lidar system selection, with a bonus update to UAS survey standards in general.

Lewis Graham opened the UAS Technology session with a structured presentation that provided a step-by-step ‘how to’ checklist for assessing the implications of the specifications for the different components that make up a UAS lidar system.

The session included operators of systems that use various grades of these components, so topics covered the specifications quoted by every manufacturer, such as relative accuracy and point resolution.  Lewis brought value to the discussion by relating these specifications to how the data collected by these systems manifests itself.

When considering the mapping accuracy of a lidar system we sometimes forget that this specification will never be better than the positional accuracy of the onboard inertial navigation system (INS). Lewis suggested that a solution should not be considered if the pitch and roll specification of the INS is worse than 0.025o. Digging further into accuracy specifications, Lewis separated range accuracy from encoder accuracies of the lidar sensor and illustrated a further limit on the overall accuracy of the survey: it will not be better than the GNSS and network accuracies of the system.

Defining differences between the accuracy and precision of the lidar system itself, Lewis further went to explain how precision of collected points can be compared to a plane derived from principal component analysis.

We can interpret Lewis’ diagram (below) comparing the precision of Riegl miniVUX to Velodyne VLP-16 sensors to mean that the Velodyne sensor collects many more points, but they are collected to a much looser precision than the RIEGL. Comparing the two diagrams, if one were to be using the data sets to classify the positions of different surface types, which would be easier to use? Also, which would be computationally “cheaper,” or more efficient to process? 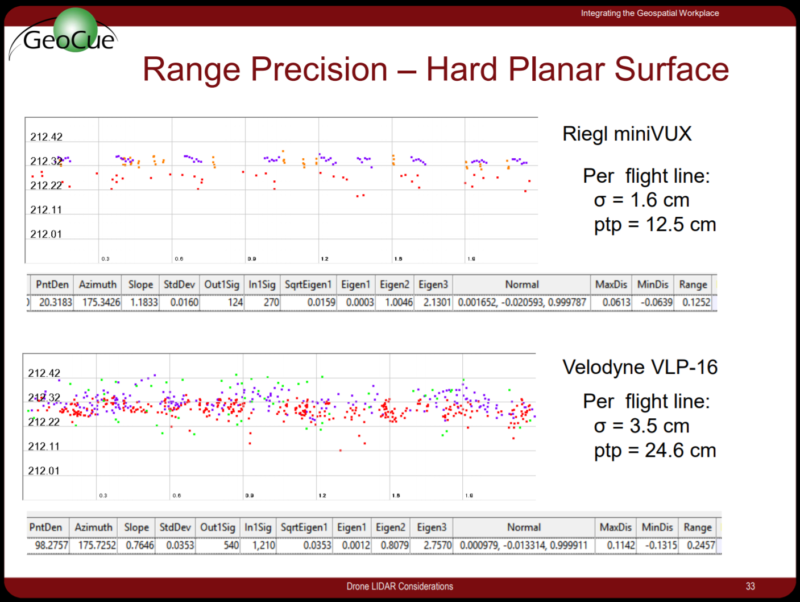 Should you use all the data?

A characteristic common to all vendors is that marketing materials will present lab results that describe the “best” data that can theoretically be collected by the system as well as the most data that can be collected by the system. Most lidar sensors are designed with the notion that users want to collect data in 360 degrees around the sensor, because “surely that will help the user collect the most amount of data possible.” 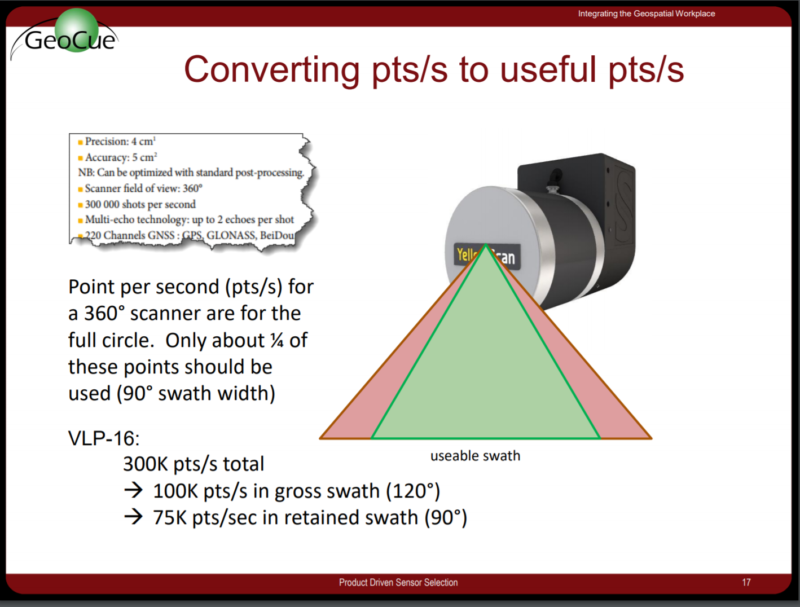 Which points are usable?

Complete 360o scanning ability is useful for sense-and-avoid applications where you do not want to miss anything that it is in the vicinity of a vehicle, but for mapping applications, data captured above the UAV is of no use at all. Furthermore, increased off-nadir scan angle increases off-nadir error in the data collected. So, while lidar manufacturers may advertise that a scanner collects many 100,000s points per second, Lewis demonstrated how only a quarter of these (within a maximum swath of 90o below the scanner) are actually useable.

While a system with a higher repetition rate may have more points left after the data has been filtered according to its field of view, it also means that there are many more points that need to be thrown away in post processing.

To conclude, Lewis presented what I will term a summary “crib-sheet” that indicates the base-line system properties required for a lidar system to be useful for surveying and mapping. As already discussed, these properties may vary considerably from those listed in the data sheets provided by vendors in the exhibition halls of industry events.

Finally, Lewis let us know that he is currently in the midst of creating a white paper on drone lidar specifications. I would encourage you to keep a look out for it. 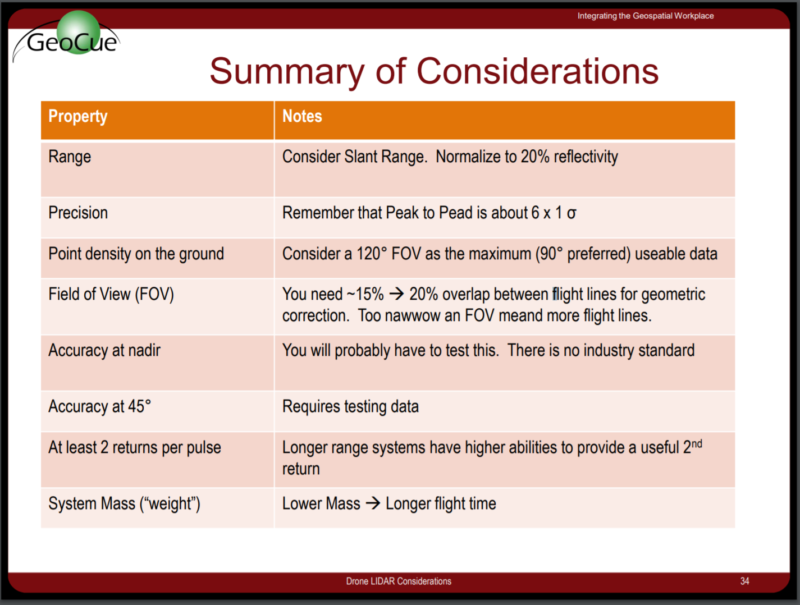 Should you still just select the system with the best specifications?

Lewis did an excellent job at illustrating the implications that system specifications have on the characteristics of the data collected by these UAS lidar systems. Unsurprisingly, as intimated by the panel in the “Lidar for AEC” session, it is soon apparent that the most expensive systems do tend to collect the cleanest, best positioned data.

Rather than simply offering buyers justification to spend more money on a UAS lidar system, I Lewis’ guidelines are also used to get the most out of any UAS lidar system that is being used, and maybe even to design better systems. For example, operational costs decrease is processing load is reduced, so hopefully we will see more systems that use sensors focused with a field-of-view immediately below the sensor. Knowledge of useable field-of-view further helps users plan surveys that use optimal overlapping flight lines. Knowledge of slant range and error away from nadir helps you understand whether useable data will really be collected on that rock slope that is being surveyed.

These system specifications and associated operational considerations all combine to form the back-to-basics guidelines for best practice that maintain standards in the industry—standards that are not necessarily dependent upon the system budget available in the first place.