Since purchasing low-cost LiDAR manufacturer PulsedLight, Garmin has remained tight-lipped about how they plan to incorporate LiDAR into consumer devices. Today, the universe has provided a possible answer in a paper published by some researchers at the University of Ulsan in Korea. Though they’re unaffiliated with Garmin, their research is very plausible for consumer products, and very tantalizing.

Published in the journal Sensors, the paper tests the possibility of using a foot-mounted IMU and LiDAR unit to locate a pedestrian in GPS-denied environments, like indoors, urban canyons, underground, and in mountain regions. And wouldn’t you know it, the LiDAR looks like it was made by the very company that Garmin just purchased.

How the system works

At its root, the system uses the IMU to gauge the movement of the foot and perform dead-reckoning calculations. (This means it takes the previous location of the foot, accounts for the changes, and calculates the new position of the foot.) Unfortunately, as well as this works, it has a margin of error, which means every step you take makes the positioning less and less accurate.

This is where the 2D LiDAR unit comes in. It measures a simple distance, like the distance between the foot and a nearby wall, and uses that to correct the position and heading of the IMU.

All it requires is a pretty healthy disregard for looking cool. I mean, just look at this thing. 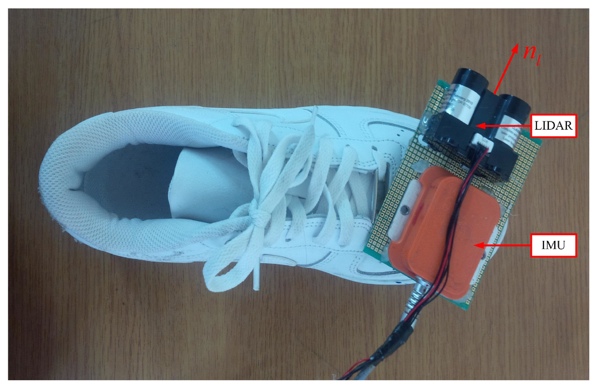 The good news is that the system and algorithm overcame every challenge the researchers threw at it, including a complex walking path, different walking styles, individuals walking interference and so on. The bad news is that the only way they suggest improving the system is putting *another* LiDAR unit on the shoes.

What It’s Good For

Ever shown up at a wedding and had no idea where you were meant to sit? Ever been a conference and had difficulty finding a particular booth? Been lost in a shopping mall? A parking garage? This is the sort of system that will one day help you find your way around.

For now, however, it seems restricted by hardware. The IMU can be made small enough to install on a shoe inconspicuously, but the LiDAR units aren’t quite there yet. Maybe one of the solid-state LiDAR units on a microchip will do the trick. Maybe, just maybe, that will make it possible to do indoor positioning on a cell phone instead of a nerdy pair of shoes.

For more information on the system, including a lot of mechanics and some gnarly math, check out the paper in Sensors.