You may have heard the buzz about Microsoft’s HoloLens. Simply put, the HoloLens is a pair of goggles that projects holographic images onto your view of the physical world. The miracle of the technology is that it tricks your eyes into believing that virtual objects–for instance the tiny CAD model of a motorcycle on the tabletop in front of you–are real.

It sounds a little like a lot of technologies already on the market (click here or scroll to the end of the blog post for a breakdown of where it sits among existing products.) Most of all, though, it sounds like the Magic Leap technology that Google just sunk half of a billion dollars into, though we can’t be sure because Magic Leap isn’t showcasing their technology yet. Microsoft is, and one demo in particular shows that these goggles can do more than show your customers a cool, futuristic 3D deliverable.

A Wired reporter describes the demo as taking place on a virtual Mars-scape. “With a quick upward gesture, I toggle from computer screens that monitor the Curiosity rover’s progress across the planet’s surface to the virtual experience of being on the planet. The ground is a parched, dusty sandstone, and so realistic that as I take a step, my legs begin to quiver.” Next, an astronaut in the other room appears in the virtual reality Mars-scape as a bright blue avatar. He directs the writer’s attention to a particular rock on the planet’s surface and, with a flick of the wrist, she has tagged the rock with a virtual flag for further inspection.

What problem does this solve, exactly? The problem of showing people what to pay attention to in a 3D environment. In contrast to 2D drawings, which present only the information you are meant to pay attention to, 3D models are sometimes difficult to use because we stuff into them all the information we can fit. It can be hard to figure out what you’re meant to be looking at in a 3D model, and this makes its greatest strength a liability.

“The general problem,” Rob Snyder, a researcher with Bentley Systems told me in an email, “is that media environments (like digital models, or hybrid digital environments) have provided few, if any, means, methods, techniques and tools for showing people what to see in the data environment–what someone wants them to see, what they should look at, understand, or do.”

This is part of what makes the HoloLens demonstration special. HoloLens ups the ante on other ways of displaying 3D models, including most existing eyewear devices, because it offers you methods to indicate what’s important to look at in a 3D model–think of the astronaut using the blue avatar to point out the rock, or the author sticking a flag into the rock for later inspection. 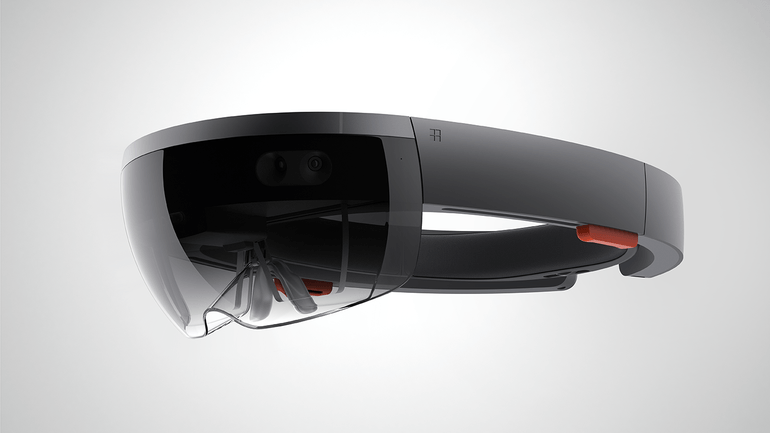 But there’s a second thing that makes the HoloLens a good tool for understanding what’s important about 3D data.

As Snyder indicates in a blog post, the HoloLens demonstration shows how it can do more than draw your attention to something in the environment, it can also give you a sense of “being in the data.” That is, it makes a virtual representation of data (like a Mars-scape) feel like it’s your actual reality, one that you are able to change by moving objects or adding annotations. It invites you to play and move things around. It works a lot like the HoloDeck did for the crew of the Enterprise in Star Trek (and has a suspiciously similar name).

That sense of being surrounded by the data, of living inside it, Snyder told me, “will probably increase your understanding and sense of participation in the data environment, and the communications within it.”

It’s not hard to imagine uses for this. Think of walking a client through a realistic-feeling 3D model of an addition you’ve planned for a building, or “driving” citizens over a virtual version of a large bridge that hasn’t been constructed yet. You and your audience can experience it together, leaving annotations (“this room is too small”) and pointing things out to each other (“what do you think of that column being placed over there?”), all of you feeling like you are inside the data and able to change it with a few gestures.

Snyder explains that technology like the HoloLens, “when accompanied by new kinds of focusing techniques within data/media environments,” gives us a way to move from “having a bunch of data” toward “being in data.” This change can help us see things in new ways, make communication more immediate, and make 3D data easier and more productive to use.

That’s not to say the HoloLens will end up being the best way of helping to put us inside our 3D models, or even the first one to be released. It’s only to say that Microsoft has released a very savvy demo that has a lot of people very interested.

+ For more of Rob Snyder’s work, check out his blog post.
+ If you’d like to know how Bentley’s Applied Research Group is working to improve the way we communicate with each other using 3D data, here’s their youtube channel. There’s a lot of really cool stuff on there.

The HoloLens is an example of see-through eyewear (much like Google Glass or the Daqri helmet), which can project graphics and images onto real objects. This type of device is often referred to as augmented reality eyewear. You could use it, for instance, in an industrial facility to present contextual data to a worker, like a graphic that displays the maximum working pressure of the valve they are currently looking at. The other kind of eyewear you’ll hear a lot about it is purely virtual eyewear (for example the Oculus Rift), which transports you wholesale into a virtual environment, like a faraway oil rig. HoloLens might be best classified as see-through eyewear, but it can a bit of this second thing, too.